Wow. I knew I was in the right ballpark, but...

As you'll recall, what I did was this:

As a reminder: What I've done here is to take the overall weighted average 2016 rate increases for the ACA-compliant individual health insurance market for each state (requested in some states, approved in others) and plug those into a spreadsheet. Then, I've further weighted each state's average increase by that state's percentage of the national total, using 3 different criteria: Total Individual Market (as of 2014); ACA Exchange Enrollment Size (as of March 2015); and Total State Population Size (as of 2014). Again, the bold-faced/green states are ones where the 2016 rates have been approved; the rest are still requested only and could change dramatically in some cases.

However, there were a whole mess of caveats included, of course; some rates were requested, not approved; in cases where I didn't know what the rate change was other than that it was under 10%, I used an across the board assumption of 7%; some of the effectuated enrollment numbers were guestimates based on assumptions about the total size of the individual market in that state; and so forth.

Anyway, with all that in mind, when I boiled it all down, I ended up concluding that overall, premiums for ACA-compliant individual market policies (both on and off the exchanges) will likely have an average increase of between roughly 12-13%.

Obviously there are some important caveats at play in Avalere's analysis as well:

If so, that would mean that 71% of all exchange enrollees are looking at an average of

Now, this could be further skewed up or down by the other 29% who selected Gold, Platinum, Catastrophic or higher-priced Bronze/Silver plans; and of course, the state-based exchanges may have higher or lower averages for any or all of these data points (for instance, California reported only 64% of enrollees selected Silver plans, but another 25% selected Bronze), so the national average could be a bit different. Even so, I'd say my "12 - 13% on average" turned out to be pretty damned close overall.

Here's the actual table; as you can see, they based their calculations on actual dollar amounts instead of percentage hikes: 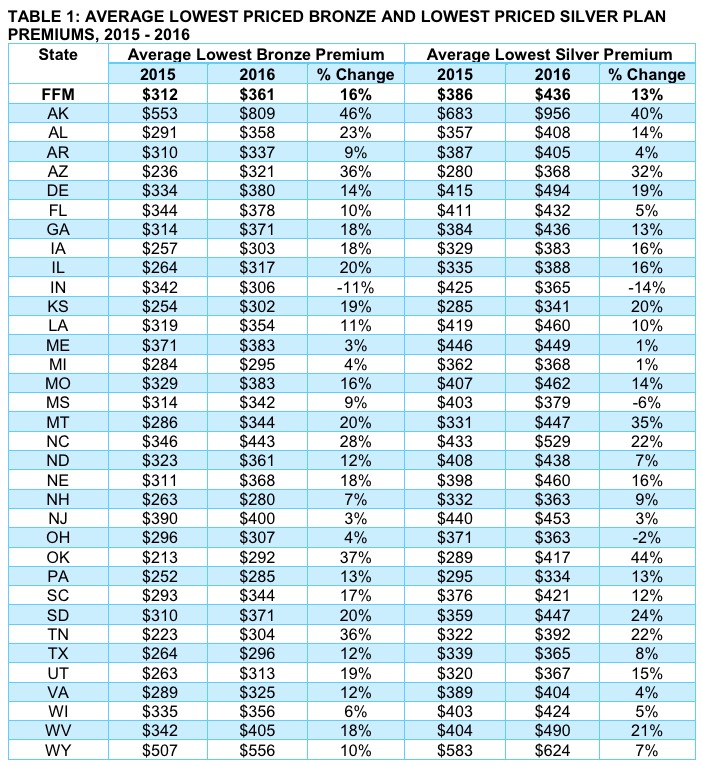