However, the larger flaw below is the total number of ACA-compliant, individual market enrollees state-wide. As you can see, in 2014, according to the Kaiser Family Foundation, Wisconsin had around 259,000 people in the total individual market. For 2015, data from other states indicates that this likely increased by about 20%...but also based on other state data, all of that increase is likely cancelled out by "grandfathered" and "transitional" policy enrollees, which aren't included in the ACA-compliant risk pool. I know that the indy market in Wisconsin is still well over 200K; they had 184,000 still enrolled in effectuated policies through the exchange alone as of 6/30, and likely have another 60K or more enrolled directly off-exchange.

And that's the problem...because according to the official SERFF rate filings at RateReview.Healthcare.Gov and the WI SERFF database, the 9 carriers offering individual policies in Wisconsin this year combined only account for 110,000 enrollees. Where are the other 140K (over half the market)? I have no idea. It's possible that those folks are distributed in proportions similar to the 110K known enrollees; if so, then the 16.9% below should be fairly accurate.

If, they're weighted differently, however, that could dramatically impact the state-wide average. For instance, Wisconsin Physicians Service (which is asking for an ugly 31.5% rate hike) states that it will only impact 13,672 people...but if it turns out that there's another 50,000 or so impacted by that rate hike, the overall average would obviously go up several points.

Anyway, with that in mind, this is the best I'm able to do with Wisconsin...and bear in mind that these are still only the requested rate changes; the approved hikes could be different yet. 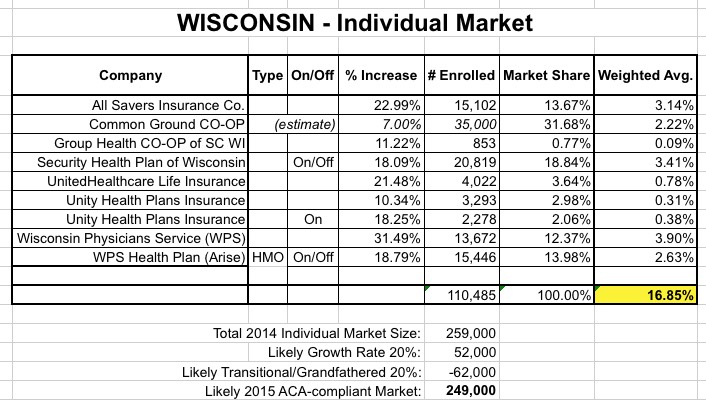 UPDATE: OK, thanks to Louise Norris for doing the legwork (and phone work) to fill in the blanks for me:

Common Ground’s (an ACA-created CO-OP) initial rate proposal didn’t show up on Healthcare.gov’s rate review tool (and still doesn’t) so we can assume it was less than ten percent. But in October, Common Ground Health Cooperative resubmitted a new rate proposal to the Office of the Insurance Commissioner. According to that document, the approved weighted average rate change for Common Ground is 18 percent, and will impact 23,629 enrollees in Wisconsin.

OK, the bad news is that 18% is obviously much higher than the <10% they had originally requested. The good news is that I'd be willing to bet that the state insurance regulators required a higher price hike in order to agree to keep Common Ground on the exchange at all. Their enrollment number is also over 11,000 lower than I had estimated, mitigating some of the impact on the state-wide average. Here's what it looks like now: 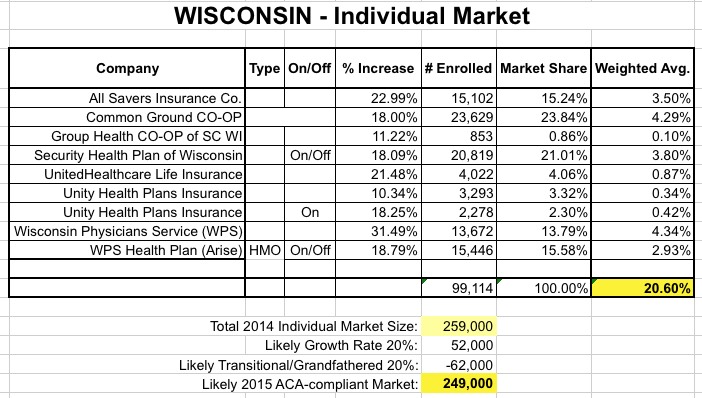 Louise also helped explain the "missing" 150,000 enrollees (note that the total above is only 99K vs. the 249K expected to be in the total individual market). Apparently in Wisconsin, the Insurance Dept. doesn't include those who are enrolled in policies which have been radically changed. So, if UnitedHealthcare (as an example) is planning on significantly altering an existing policy, the policy is categorized as "new" and thus isn't counted as a change to an existing rate.

This actually makes sense, in a way; if you're currently paying $500/month for a policy with specific features, and that policy goes up to $600/month but also made major changes to the features, does it really count as the same policy?

Anyway, the net result of all of this is that Wisconsin's weighted average increase now stands at 20.6% for the individual market. While this is higher than I had previously thought, at least I'm a lot more confident about the number.