Louise Norris has again done some of the heavy lifting for me over at healthinsurance.org, this time for New Hampshire:

In 2015, New Hampshire’s exchange had five carriers, up from just one in 2014.  There will still be five carriers in 2016, although there’s one swap:  Assurant/Time is exiting the market (nationwide), but Ambetter (offered by Celtic) is joining the exchange in New Hampshire.

...Two carriers in the exchange – Minuteman Health and Community Health Options – have requested double digit rate increases, although they have not yet been approved.  Both carriers are CO-OPs created under the ACA, and both expanded into New Hampshire at the start of 2015, so their claims data for the state is very limited.

As for the off-exchange market, according to Louise, it's the same 5 companies, and only those five companies:

The same five carriers will be offering individual policies outside the exchange in 2016, and there are no additional carriers in the state that only sell off-exchange products.

Community Health Options' 2016 filing claims that the total individual NH market is around 50,000 people (on+off), but their 2014 market was around 55,000, according to the Kaiser Family Foundation, and almost certainly has grown year over year. After knocking off the "grandfathered" and "transitional" policy enrollees, I estimate that it's likely around 56,000 at the moment.

It's important to note that New Hampshire has exactly 45,543 effectuated enrollees on the exchange as of September, so that leaves only around 10,000 people or so enrolled in off-exchange policies. Since all of those have been accounted for between the 4 existing companies, and Ambetter/Celtic won't start until next year, that leaves only those 10K off-exchange enrollees unaccounted for. It's also safe to assume that neither Minuteman nor Community Health have much interest in the off-exchange market at all, since they're both CO-OPs created specifically to target ACA exchange enrollees.

Louise uses a "worst-case" scenario which could mean up to an 18.5% weighted average rate hike for the NH market, but I'm a bit more hopeful. By splitting the high/low difference for Minuteman and Community, and by assuming a 7% average hike for the other 2 current companies (Anthem and Harvard Pilgrim), I come up with an estimated weighted average requested hike of around 13.8%: 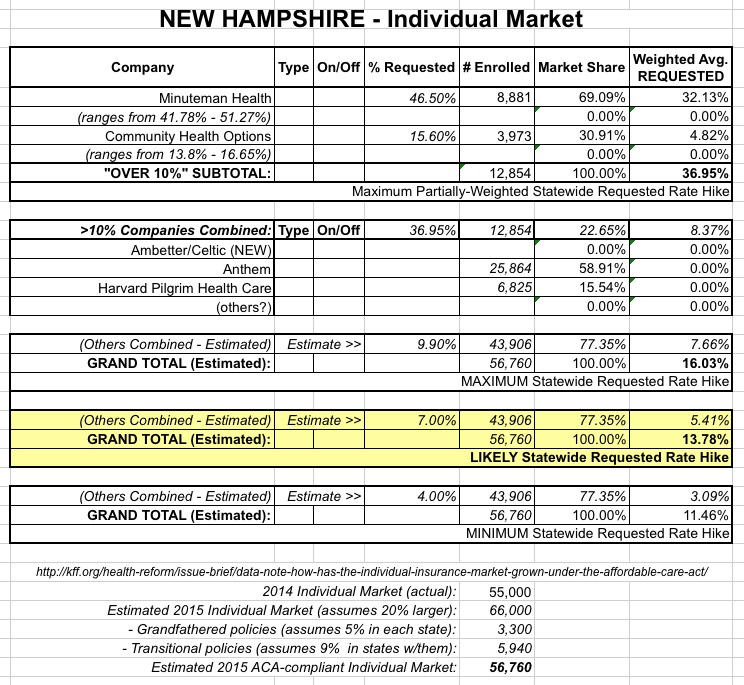