Over at HealthInsurance.org, Louise Norris has done her usual excellent job of summarizing the enrollment/rate/exchange participation situation for another state, Utah. As she notes, in addition to the companies which operated on the Utah ACA exchange this year, one more "mystery" company is expected to join in 2016. Of course, Louise only focuses on the companies actually operating on the exchange, while I'm looking at the entire ACA-compliant individual market state-wide (because the risk pool includes off-exchange policies as well).

Fortunately, Utah has a fairly comprehensive rate review database with an easy-to-use lookup feature. Unfortunately, a few of the entries don't quite jibe with HHS's RateReview website. Most notably, the HHS site claims that Arches Mutual Insurance has 2 filings from the same date: One requesting a jaw-dropping 58% hike, the other for a slightly less-insane 46.65% increase, neither of which includes the actual number of covered lives:

However, when you look Arches Mutual up on the Utah Insurance Dept. website, there's only one listing for 2015...for 45.36%. Fortunately, it also includes the covered life number (36,594), and I assume this matches up with the 46.65% HHS entry, but I have no idea what happened to the 58% request. Both were submitted on the same day, so this doesn't appear to be a case of one being a revised version of the other.

In addition, National Foundation Life and UnitedHealthcare are both active companies (off-exchange) this year, yet the filings for each lists their total covered lives as precisely zero, which is a bit curious. 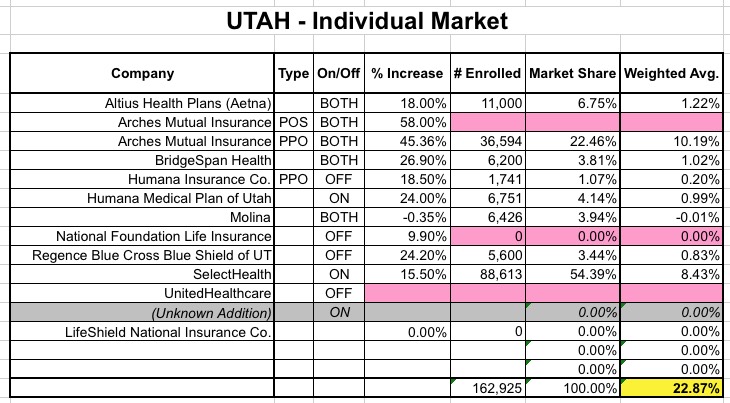 22.9% looks like the weighted average requested hike across the state...assuming that the 58% Arches request is invalid. On the other hand, Utah's total 2014 ACA-compliant individual market was around 182,000 (actually 214K minuse "grandfathered" and "transitional" policies), so there could be around 20,000 missing from the total. 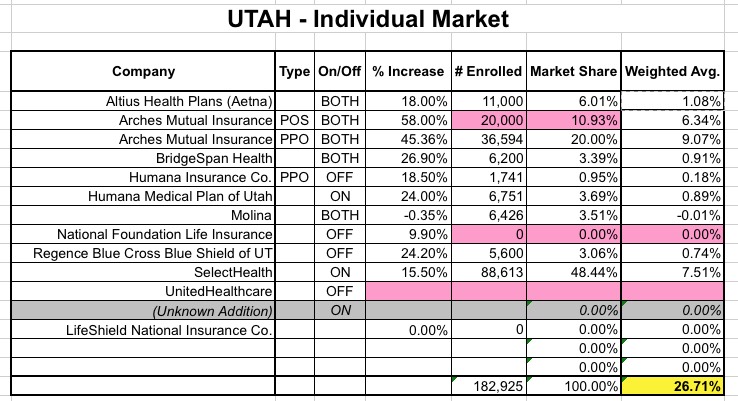 Again, this is pure speculation on my part; those "missing" 20K might not exist, and/or the 58% hike request might not be relevant either. To play it safe I'll split the difference for now and go with a flat 25% weighted average hike request.