Oklahoma is an example of how frustrating this rate review stuff can be, even when there's only a handful of companies involved and much of the data is easily accessible.

According to RateReview.Healthcare.Gov, Oklahoma only has a single company asking for rate hikes greater than 10%: Blue Cross Blue Shield of OK.

The main listing gives the requested rate increase as a jaw-dropping 43.95%...but the description below it says that "the range of rate increases by product is 22% to 34%".

Now, there are two additional BCBSOK listings on the Rate Review site which do appear to be included in the first one (all 3 list the total "members affected" as exactly 137,506)...but the other two have 22.64% and 33.83% listed as the "official" requested rate increase, both of which are still well below 44%.

How on earth you can have the individual product rate hikes range from 22-34% but average 43.95%, I have no idea. Obviously I'm missing something here.

As for the rest of Oklahoma's individual market, they seem to have 4 other companies which requested hikes of less than 10%: CommunityCare, GlobalHealth, Humana and UnitedHealthcare. I don't know what any of them requested, just that it's less than 10%. I also don't know the market share of those 4, but I do know that Oklahoma's total individual ACA-compliant market is likely something like 177,000 people.

Based on that, the weighted average state-wide should be somewhere between 27% - 28%...but given my uncertainty about the BCBSOK situation, I'm gonna bump up the high end of the range to 34%.

Split the difference and I think Oklahoma residents are looking at roughly a 30% rate hike overall...but obviously there are some major caveats this time around.

UPDATE: OK, thanks to Louise Norris for noting that the actual redacted memo attached to the rate filing states:

"The proposed increase is 31.2% across the entire block of BCBSOK individual ACA-compliant plans effective January 1, 2016"

With that in mind, here's what it looks like assuming the other companies average out to either 4%, 7% or 9.9%: 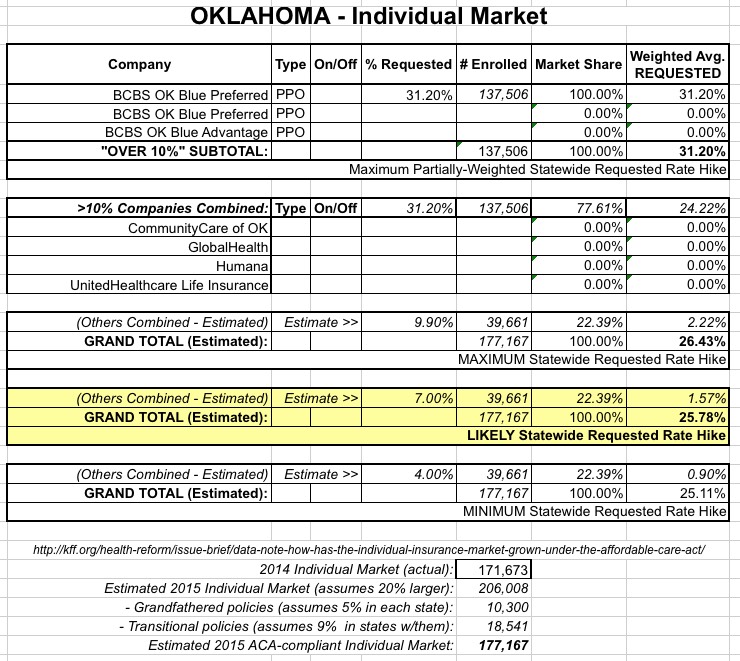