Back in July, after several revised rate hike requests, the overall weighted average rate hikes requested for the individual market in Connecticut had dropped twice: From 7.7% overall to 7.2%, and then again to just 5.2%, as individual insurance carriers reevaluated their numbers and estimates.

Today, Arielle Levin Becker reports that the final approved rate changes have been released, and the overall, weighted average hike has dropped even further:

Premiums for the 55,000 people who buy Anthem Blue Cross and Blue Shield health plans through the state's individual market will rise by an average of 2.4 percent next year, while ConnectiCare Insurance Company's 34,400 customers will see an average rate hike of 8.5 percent.

Both companies sought higher increases, but the Connecticut Insurance Department deemed their proposed rates excessive and required the companies to revise their proposals.

Similarly, Golden Rule, which covers 3,414 people, sought an 18.5 percent rate hike but, after revising it based on the regulator's findings, will instead raise rates by 1.1 percent.

In then end, when all of the numbers are plugged into the spreadsheet, you get a mere 3.5% increase on the individual market. As a bonus, I've found the small group market final numbers as well, where the story is even better: An overall average 2.9% reduction in 2016 rates: 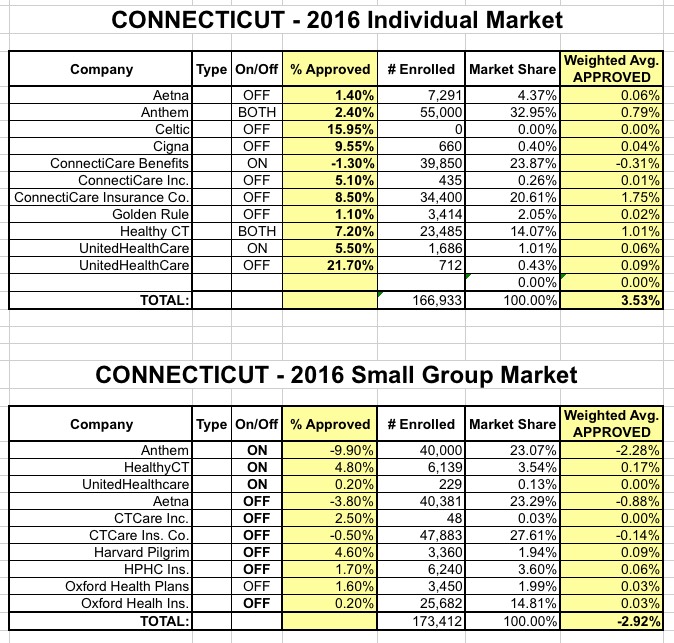