UPDATE x2: So, what would the real-world impact of the House GOP winning their latest court case be?

Yesterday I noted that the "sequel" (in spirit, not in actuality) to the King v. Burwell federal case, House v. Burwell, has been given the green light to proceed by a federal judge...or at least the part of the lawsuit most relevant to this site and most everyday people:

The suit, brought by Speaker of the House John Boehner and the House Republicans, has two major components: Attacking the Obama administration for delaying implementation of the Employer Mandate portion of the ACA by a year (which was done because most businesses needed more time to prepare for this provision, and which is doubly stupid because the GOP has voted to repeal the entire law dozens of times anyway); and attacking the administration for implementing the Cost Sharing Reduction provision, which they claim the administration wasn't specifically authorized to do.

The judge in the case shot down the employer mandate part (I'm sure there's a legitimate Constitutional reason she did so, but I suspect one of the real reasons is because she realizes that there's no such thing as a time machine; the HHS Dept. can't go back and un-delay something, after all), but allowed the CSR part of it to move forward.

Now, in the case of King v. Burwell, a plaintiff win would have meant that any state operating via the federal exchange (basically, Healthcare.Gov, although a few states were in sort of a limbo legal status due to their hybrid nature) would have had their Advance Premium Tax Credits cut off, directly jacking up insurance premium costs by thousands of dollars for over 6 million people across 34 states and having the indirect effect of raising premiums by up to 1,000% (that's not a typo...we're talking up to 10x in some cases) due to the "death spiral" effect as a good chunk of those who lose their tax credits drop out of the market entirely.

The impact of losing the CSR credits via House v. Burwell, on the other hand, would be both larger and smaller than the APTC impact from King v. Burwell. U of Michigan law professor Nicholas Bagley explains why:

Even if that happens, though, it’s not right to say—as Kliff and others have—that the cost-sharing reductions will evaporate. Take a close look at how the reductions are structured. Health plans on the exchanges are required under the law to reduce cost-sharing levels for their enrollees who make less than 250% of the poverty level. The Treasury Secretary is then supposed to “make periodic and timely payments to the [health plans] equal to the value of the reductions.”

What if the Treasury Secretary can’t make those payments? Well, health plans would still have to adhere to the rules about reducing their customers’ cost-sharing. The 5.9 million* people who get cost-sharing reductions would thus get to keep them. Health plans just wouldn’t get reimbursed.

*NOTE: The actual number of people currently receiving CSR assistance is a bit lower as of now, around 5.6 million.

OK, so the good news is that the enrollees currently receiving CSR credits would continue to receive them, and thus would not be directly impacted; it's the insurance companies who would be screwed here, right? Well...

Or would they? Even without an appropriation, health plans still have a statutory entitlement to cost-sharing payments. What that means in non-legalese is that Congress has promised to pay them money—whether or not there’s an appropriation. And health plans can sue the government in the Court of Federal Claims to make good on that promise. (Congress has undeniably appropriated the money to pay court judgments.)

That’d be bonkers, of course. Forcing health plans to pursue expensive and time-consuming litigation to recover what they’re owed doesn’t help anyone. The plans will just pass on the costs of the litigation, delay, and uncertainty to their customers.

Yep: The insurance companies would most likely simply jack up their premiums to their enrollees enrollees to make up the difference as an increased "cost of doing business" (and in this case they'd have a solid justification for doing so).

So, what would that mean to the enrollees?

Well, Josh Schultz asked this very question on Twitter last night, and I believe he, Andrew Sprung and myself have come up with the answer: 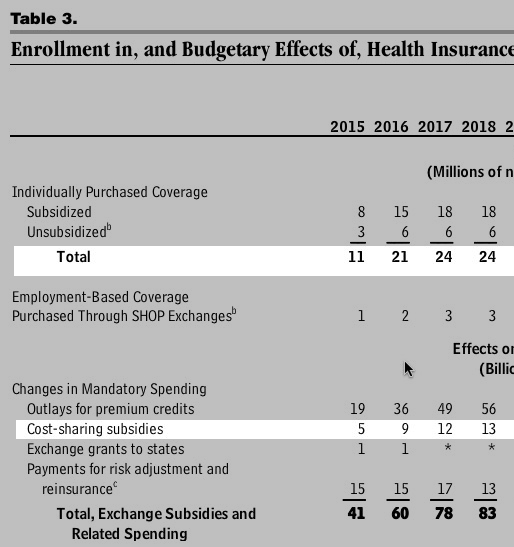 In other words, for 2015 the CBO's $5 billion CSR estimate is likely to be pretty close to the mark even though they overestimate the number of exchange enrollees.

OK, so that's $5 billion which the insurance industry would have had to eat (actually, pass on to their customers). Here's the thing, though: They wouldn't be passing this extra cost on to a subset of their customers, they'd spread the cost out to all of them. Not just the 5.6 million currently receiving CSR, and not even just the 8.1 million receiving APTC. In fact, not even "just" the total enrolled through the exchanges (around 9.95 million at the moment)...but everyone in that risk pool...which also includes the 7 million or so off-exchange ACA-compliant enrollees: Around 17 million people in all.

Of course, these are all just rough estimates. The actual CSR payouts could prove to be higher or lower, and the cost-per-person will likely grow next year for the same reasons that premiums and other healthcare costs are expected to grow anyway. Even so, the takeaways here are:

UPDATE: Oh, yeah, there's one more thing: As both my wife (and Sprung) pointed out when the news broke yesterday that this case will move forward, having it in the news for the next year or two could actually be a good thing...because that means that Cost Sharing Reductions will be in the news from time to time.

This is a good thing because, as Sprung keeps pointing out, far fewer people know about the CSR financial assistance than know about the APTC credits. The key thing to keep in mind is that unlike APTC, which is available to everyone between 100-400% of the federal poverty level and which are available for any "metal level" plan, CSR assistance is only available to those from 100-250% FPL, and only available for Silver plans...which are often less expensive than Bronze plans for those who qualify for CSR.

Sprung has turned public awareness of CSR being available on Silver Plans into a sort of obsession, and rightly so: For most people in the 100-250% FPL range, Silver plans are a much better choice than Bronze plans even if the premium itself seems to be considerably higher. If there's a Silver lining (hah!) with this lawsuit, the increased awareness of the Silver/CSR option is it.

UPDATE x2: The Center on Budget & Policy Priorities has posted their own analysis which comes to the same conclusion as Prof. Bagley:

Second, the ACA also makes clear that insurers have the legal right to be reimbursed for providing these cost-sharing reductions.  The ACA states that the federal government “shall make periodic and timely payments” to the insurers equal to the value of the cost-sharing reductions they provide to eligible individuals.  The ACA does not make this requirement contingent on Congress appropriating funds (or sufficient funds) for that specific purpose.

...And, in the event that the courts ruled that no ACA funding stream currently exists for these subsidies and Congress refused to appropriate funds to compensate insurers for providing the subsidies, insurers could seek relief in the United States Court of Federal Claims and would almost certainly prevail, given that the ACA clearly establishes an entitlement to cost-sharing subsidies.  Congress long ago enacted an open-ended, permanent appropriation of whatever amounts are needed to pay valid claims against the government, including judgments from the Court of Federal Claims.  The Court of Federal Claims could order that insurers be paid, and insurers would then receive their cost-sharing subsidy payments without any need for further congressional action.