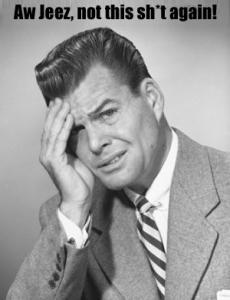 I posted about this back on July 3rd, just a week after the historic King v. Burwell Supreme Court ruling, which put the Constitutional seal of approval on the ACA's Advance Premium Tax Credits (otherwise known as the Federal Tax Subsidies) for over 6 million people across the 3 dozen Healthcare.Gov states.

The short version is that there's Yet Another lawsuit winding its way through the federal court system: House vs. Burwell. This is the one which is being brought by John Boehner and the House Republicans against the Obama administration. Here's the recap.

As I understand it, there's 3 main issues at hand:

As I put it in July:

NOTE: I've been informed by JJ Gomez via Twitter that even if it does make it to the SCOTUS, it would likely take longer than that; the appeals process alone apparently takes over a year, so it probably wouldn't show up there until after the next President is inaugurated, so...

Anyway, that was then, this is now; here's the latest:

Though the judge ruled that House leaders do have legal standing and thus can sue Obama, it wasn't a complete victory for Republicans.

The lawsuit focuses on whether President Obama could delay implementation of the law's employer mandate and continue making payments to insurers through a program designed to cushion risk in the early years of the law's implementation, even though Congress refused to directly appropriate the funds.

Federal Judge Rosemary Collyer decided that the House can sue over the risk payments*  cost-sharing but not the mandate delay.

So far there's no word on the Cost Sharing Reduction part of the lawsuit,* which is the only one which really concerns me. You can't un-delay the Employer Mandate (unless you have a time machine), and I believe the "risk corridors" are only in effect for 1 more year anyway before they get phased out, so that minimizes the damage if they get cut off. The CSR payments are the big concern for me here.

*UPDATE: OK, Philip Klein of the Washington Examiner has corrected the confusion; apparently he mixed up "Risk Corridors" (which are not part of the House vs. Burwell lawsuit) with Cost Sharing Reductions (which are):

@charles_gaba Actually, stand corrected. The lawsuit only concerned CSR, not RC, and it will go forward.

In other words, yes, Cost Sharing Reductions are potentially at risk.

Nick Bagley, a University of Michigan law professor, said it's not an "earth shattering surprise" that the court is allowing part of the lawsuit to go forward.

But the judge also opened a pathway to the part of the lawsuit that could be most damaging to the law, he said.

"Holding that the administration lacks the authority to cover the cost of those reductions would create a real mess on the ground," Bagley said.

"It inserts the court into the middle of a political food fight," he said.