The QHP total includes 5,436 people who enrolled during a tax season Special Enrollment Period from March 15 through April 30. Marylanders who owed a tax penalty because they did not have health coverage in 2014 were allowed to enroll for 2015 coverage after open enrollment ended. Of those enrollments, 1,539 were in the 18-34 year-old age group; 2,487 were 35-54, and 1,410 were in the 55+ age group.

As I noted last month, the "94% receiving financial assistance" bit is slightly misleading; it's true, but only because the Medicaid enrollees are lumped in. If you're talking about QHPs only, it's more like 71% (87.3K out of 123.7K). Whether that's a good or bad thing obviously depends on your POV.

The larger point is that aside from the 11,000 or so people who never paid their first premium at all (effectuated enrollment as of 3/31/15 was 114,559 while QHP selections during Open Enrollment + the Tax Season SEP totalled 125,581), Maryland has seen virtually no net attrition so far. This will likely change towards the end of the year, but for now it's good news.

Meanwhile, on the Medicaid side:

As of July 31, the total number of Medicaid and MCHP enrollment is 1,237,142. Compared to Dec. 31, 2013, the net change in Medicaid enrollment as of July 31, 2015 is +234,285. This figure takes into account that individuals lose Medicaid coverage because of changes in household, age and income, as well as redeterminations. Also, the total number of ACA Medicaid Expansion Adults is 220,026 as of July 31. That is newly eligible childless adults up to 138 percent of the Federal Poverty Level (FPL) and newly eligible parents 116 percent to 138 percent FPL.

As explained in the press release, it's important to remember that the 482,553 figure is the cumulative number of new Medicaid enrollees; current enrollees have also dropped out of the program (just as some people have dropped their private plans), leaving a net increase of 234,285.

Maryland is also one of the few states to break out actual ACA Medicaid expansion from "woodworkers": 220,026 of the former vs. just 14,259 of the latter.

In addition, this report breaks out MD ACA exchange enrollment by both Metal Level and Market Share: 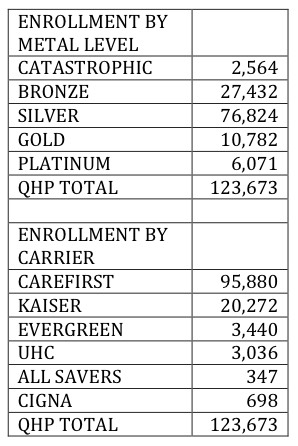