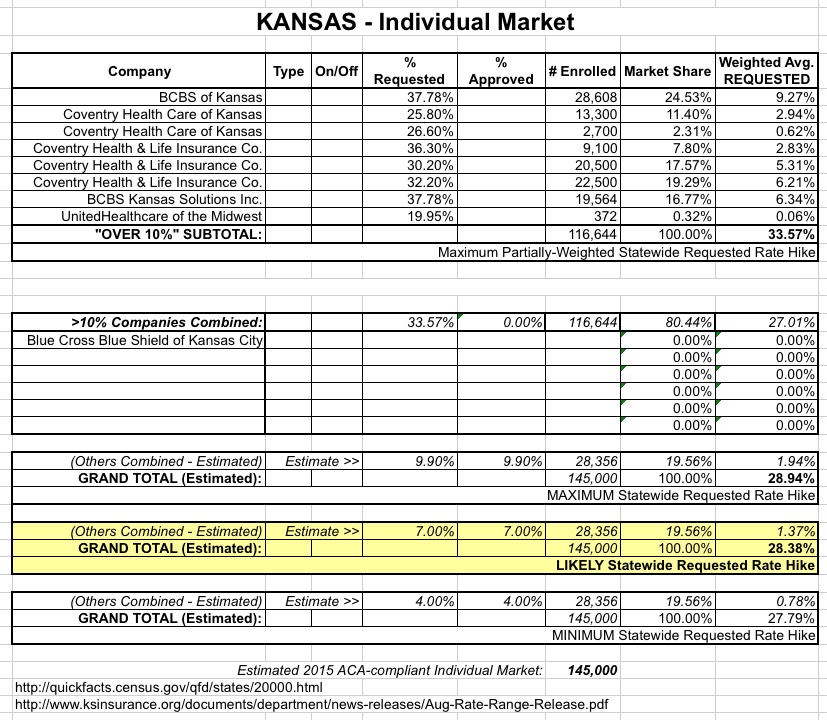 In May, Kansas insurance companies requested rate increases of up to 39 percent for individual market policies to be sold through the healthcare.gov marketplace during the next open enrollment period, which begins Nov. 1 and ends Jan. 31, 2016.

But Selzer, a Republican serving his first term, said rate reviews conducted by the department reduced the proposed increases to an average range of 9.4 percent to 25.4 percent.

(Sigh) OK, so there's no easy way to calculate the overall approved average rate increases until they're posted for each individual company, which hasn't happened yet.

As for the total market size, that's unknown as well; the press release only said that the rate changes would impact "less than 5% of Kansans". Kansas has a total population of around 2.9 million people, so their ACA-compliant enrollment total is 145,000 at most.

I'm assuming that the low end number (9.4%) applies to BCBS of Kansas City (which is different from BCBS of Kansas or even BCBS Kansas Solutions, as confusing as that sounds).

Based on the requested numbers above, I'd be inclined to assume that the "25.4%" figure applies to the bulk of the enrollees; perhaps a few percentage points less, but presumably in the 20-25% range overall.

As always, I'll update this if/when I get better info, but for now it looks like Kansas is looking at somewhere in the 20-25% range. I'll call it 23% for the time being.