A couple of weeks ago I noted that only 2 AR companies even requested hikes of more than 10%, and only a few hundred people are currently enrolled in those policies anyway. Based on this, plus the informed opinion of local reporter David Ramsey (an expert on all things ACA-related in Arkansas), I projected a weighted average rate increase request of perhaps 4% overall.

Today it looks like the approved average should be pretty close to that:

The Arkansas Insurance Department approved the 2016 rates for companies participating in Arkansas' health insurance marketplace, which was established under the federal health care overhaul. More than 57,000 Arkansans receive tax credits to purchase insurance through the exchange.

The 2 off-exchange companies I mentioned also had slight modifications to what I listed last week, although the changes and numbers are so tiny as to be inconsequential.

Unfortunately, I don't know what the actual current individual market share is for each company in Arkansas. The only thing I have to base my estimate on is the exchange-based market share as of a year ago. At the time, Blue Cross Blue Shield of Arkansas held the lion's share of the market, with around 68%, with Celtic/Ambetter making up around 30%. The remaining 2% was primarily QCA/QualChoice.

Assuming these ratios are around the same today, here's how it looks on the spreadsheet: 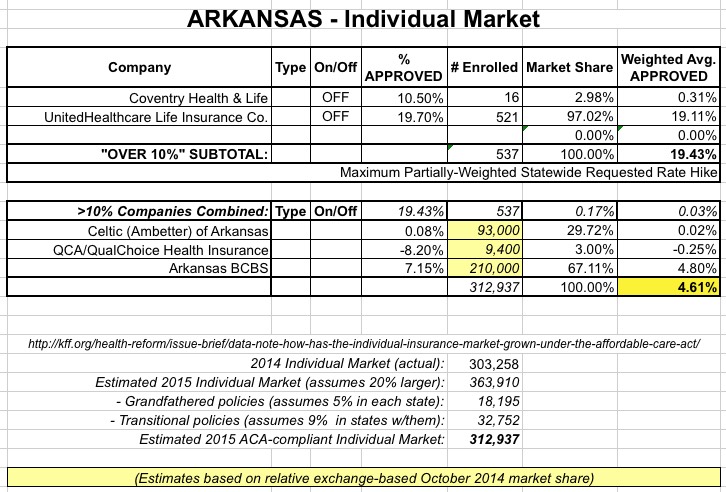 Again, there's still some big caveats here. It's possible that the total market size is larger or smaller, although I'm pretty confident that it's in the 310K range. The larger unknown is the relative market share size; for all I know, BCBSAR has increased their share, which would raise the overall weighted average closer to the 7% mark. On the other hand, it might have shrunk, which would make the overall average lower than the 4.6% shown. I'll update this entry as appropriate if I receive more accurate data, but for the moment, 4-5% seems to be about where Arkansas is coming in.