Victory dance over. What's actually *in* the CMS report?

OK, now that I've gotten that out of my system, let's look at today's CMS report itself:

“Life changes are often impossible to predict, but access to affordable and quality health care coverage should never be. So far this year, nearly 950,000 people have gained the peace of mind that comes with access to coverage by taking advantage of a special enrollment period, providing us with further evidence that the Health Insurance Marketplace is working for America’s families,” said Kevin Counihan, CEO of the Health Insurance Marketplace. “We want people to know that if they lose a job, get married, have a baby, or experience other life changes, we’re here to help them find coverage they can afford.”

Today’s Special Enrollment Period Snapshot only reflects plan selection activity and, as such, does not capture whether consumers effectuated their enrollment and continued paying for health insurance coverage following the plan selection.

They broke out the 943,934 off-season QHP selections by type of Special Enrollment Period:

As I noted in my update to the previous post, I originally inadvertently double-counted the Tax Season SEP enrollees, and had to subtract 147,000 of them (the earlier-announced number) from the grand total. On the one hand, this brings things down to 12.9 million (12,909,955). On the other hand, this was still as of June 30, so the grand total as of today (August 13) almost certainly is at least 13.1 million after all.

The best part about today's report is that they not only broke out the off-season enrollments by type, they also did so by state, allowing me to bring the Spreadsheet up to date as well (through the end of June, anyway).

WARNING: The spreadsheet below is not for the faint of heart, but it's not nearly as scary-looking once you understand what everything means: 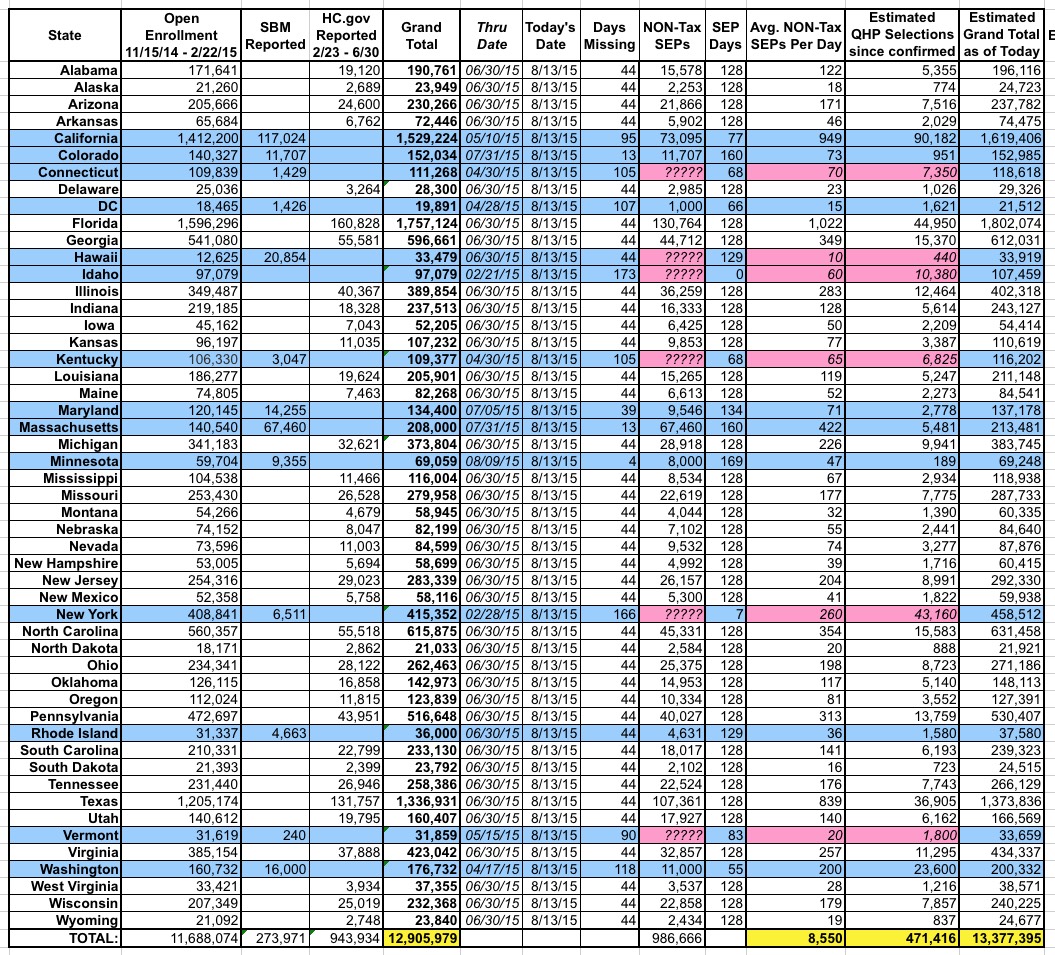 The first few columns are pretty obvious: The official total QHP selection tally as of the end of Open Enrollment on 2/22, followed by the total reported off-season enrollments since then in each state. For most states the off-season number is cut-off as of 6/30 (ie, today's report). For the state-based exchanges (blue states), the cut-off date varies widely. Idaho hasn't provided any updated numbers since Open Enrollment ended, for instance, while Minnesota just updated theirs as of a few days ago. Other states range widely in between.

Last year I estimated that roughly 9,000 people per day nationally were still selecting QHPs during the off-season, which ran for 7 months from 4/16/14 - 11/14/14, and was proven pretty close to the mark.

This year I decided to play things more cautiously given the unknown factors involved. I dropped my QHP selection estimates during the off-season down from 9K to 7,500 per day.

However, based on today's CMS report, it looks like it's coming in much closer to last year after all: According to my calculations above, roughly 8,500 people per day have been signing up nationally, only a slight drop from last year.

Another way of looking at it is specifically noted in today's report for Healthcare.Gov:

Healthcare.Gov is responsible for roughly 76% of all exchange QHP selections, with the 14 state-based exchanges making up the rest. That would be around 7,900/day nationally.

Based on this, I'm recalculating The Graph accordingly. Instead of breaking 13.1 million this week, it's far more likely that the 13.0 million mark was actually broken around the end of June, with the 13.1 million mark being hit about 3 weeks later, around July 18th...or roughly one month ago.

One other thing: The report also breaks out the SEP enrollments by age group, which is kind of interesting (remember, this is for Healthcare.Gov only, it doesn't include the state-based exchanges): 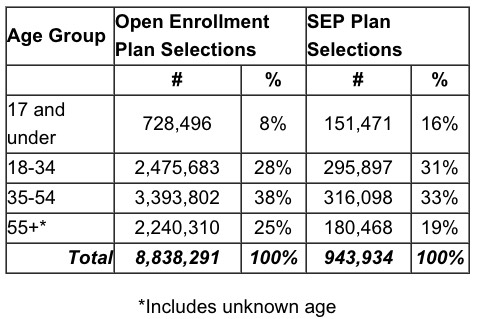 Hmmm...children and young adults (under 35) went from 36% of the total during open enrollment to 47% of the total, with the biggest jump being a doubling of the percent of children. This makes sense assuming that a large chunk of the 152K who fall under "Other" were babies being born and added to an existing policy.

Of course, without knowing the age demographics of those who are dropping their policies, there's no way of knowing what sort of impact (if any) this is having on the relative risk pool, but it's certainly a good thing that more younger people have been joining the mix.