Pennsylvania: Another example of how misleading the Scary Rate Increase headlines can be

Over at Balloon Juice, Richard Mayhew has posted a great piece illustrating, once again, the importance of looking past the scary headlines to find out 1) what the true picture is (ie, taking all of the rate changes into account--not just the biggest ones--and weighting them by proportionate market share), and 2) what's going on with your situation, not someone else's:

As expected, the initial ask by insurers is being revised down. It is easier for insurers to get state regulators to agree to a lower number from the initial than to get the regulators to agree to a higher number than the initial ask. That allows regulators and their champions to point to a clear example of their effectiveness at protecting the public. This is a bit of a kabuki. In my state, when Mayhew Insurance and our competitors submit rates, there is a de facto implicit fudge factor built into the rates (usually as excess reserve accumulation) that everyone expects to be cut by the third round of review.

The basis for his piece is a story by David Wenner of PennLive which does an excellent job of digging into not just the uglier numbers (requested increases of up to 58.4% from some insurance companies in the state), but also making sure to stress that the federal "Rate Review" website at Healthcare.Gov only includes companies requesting increases over 10%. Plus, of course, the fact that these are still requests only, as Mayhew noted above.

Yet a closer look at premium requests in Pennsylvania shows the situation isn't clearcut, and it's not certain people will have to pay dramatically more in 2016.

"In fact, the large majority of proposed rate filings request increases much less than ten percent," said Ron Ruman, a spokesman for the Pennsylvania Insurance Department, which is in the process of the reviewing requests, and could decide some are unwarranted.

However, Ruman also said, "An initial review of the filings does show that some companies paid out more than they received in premiums last year."

The requests can be viewed on the insurance department's website.

To illustrate this, I've put together the tables below (one for the individual market, one for the small group market). I've color-coded them to distinguish between companies with requested increases over 10%, those requesting 5-10% and those asking for less than 5% hikes, along with those new to the market. As it happens, in the individual market it breaks out at exactly 6, 6 and 6 (plus one new entry). The small group market is less frightening to begin with--only 2 companies are asking for hikes of over 10%.

Unfortunately, as you can see, I ran into a lot of frustration when trying to plug in the actual market share numbers; fewer than half the company rate request filings included the number of people currently enrolled in their policies at all, and even then there was a lot of confusion.

For instance, UPMC Health Options and UPMC Health Coverage both claimed to have 58,000 people enrolled via the ACA marketplace at the moment; not only does this not include off-exchange enrollees, they fail to state what portion of that 58K belongs in each filing. Somehow I find it difficult to believe that each division has exactly 58,000 people enrolled. As another example, the Highmark filing states that exactly 71,981 people would be affected by their rate increase both on and off the exchange...yet the article states that Highmark enroll 219,000 people on the exchange only. I suppose that might also include the 20,394 via "HM Health Insurance", but that still would only bring the total up to around 92,000, so obviously I'm still missing something here.

The total number of Pennsylvanians enrolled in effectuated policies as of 3/31 was 427,454, although it's likely up to around 436K by now (a 2% increase). However, I have no idea what the off-exchange total in PA is (it's likely around 340K, but that's a completely blind guess and could include people in "transitional" plans which aren't part of this rate pool anyway). As a result, I've given up on trying to calculate any sort of "weighted average" in Pennsylvania.

Still, the point is that there's a lot more companies asking for fairly modest increases next year than those asking for huge ones. Of course, it's possible that the premiums at these companies are already really high to begin with...or, perhaps they're fairly inexpensive, but have crappy networks, lousy customer service or are shady/fly-by-night operations. I have no idea. 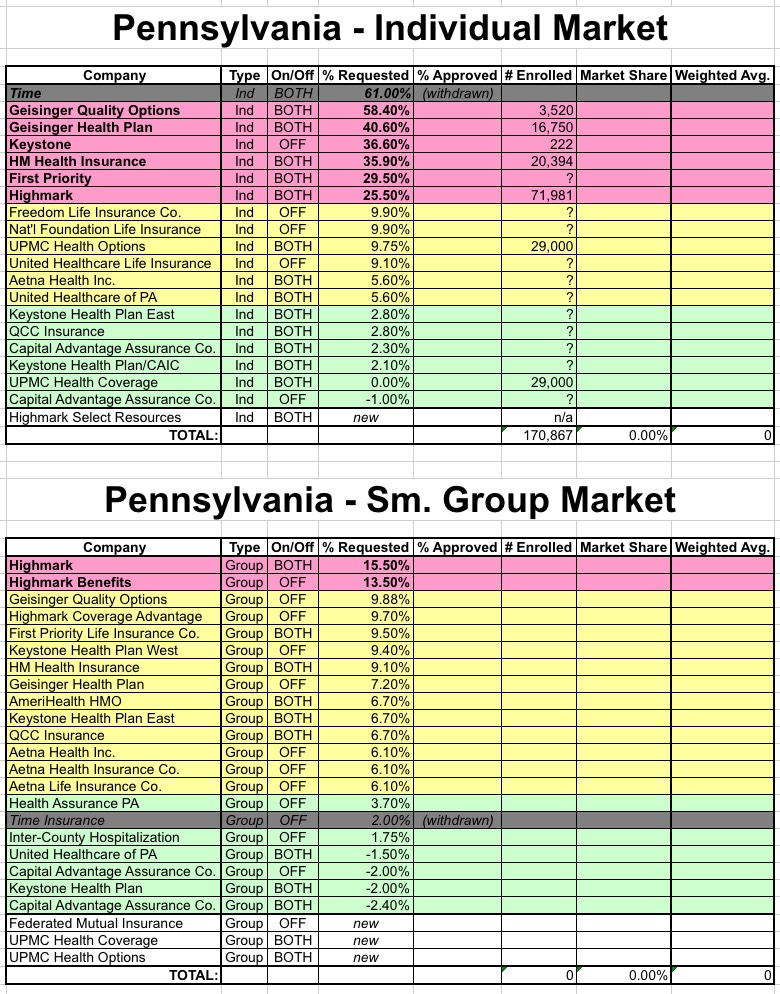