Before I get into the meat of the headline, I just wanted to point something out (bear with me, there's a reason for this):

This brings us to today: An article from John Merline of Investor's Business Daily this week reports the answer to a question which was being greatly debated earlier this spring: After 5 years of hoopla, fuss & bother over it, just how many people would end up actually owing the individual mandate tax for the first year it was implemented?

The IRS reported this week that 6.6 million people paid the ObamaCare mandate penalty for not having insurance last year, which the administration says is 10% higher than they'd expected.

OK, so they were expecting around 6 million and it ended up being 6.6 million. Got it. Useful info, thanks! However, in the very next sentence...

This isn't exactly good news, given that the entire point of the mandate penalty tax is to encourage everyone to buy coverage.

Um...hold the phone, John. Seeing how 6.5 million people can't legally buy coverage via the ACA due to being undocumented immigrants and another 3.7 million can't afford to enroll in private policies but also aren't allowed to enroll in Medicaid due to 20 states still being jackasses about expanding the program via ACA provisions, it's more than a little disingenous to mock the law for not being able to cover "everyone".

In addition, the fact that around 23 million other people who are supposed to enroll but didn't isn't exactly a State Secret. Quite frankly, I'm surprised that the number who ended up having to pay the penalty the first year didn't end up being closer to that than to 6 million. However, there's a pretty obvious reason for the discrepancy. From the Wall Street Journal:

WASHINGTON—The U.S. government estimates as many as six million households may have to pay a penalty for not having had health-insurance coverage last year as required under the Affordable Care Act, officials said Wednesday.

HOUSEHOLDS, dude. Not people, households. The average household size in the U.S. is about 2.58 people. I don't know if that's representative of these 6.6 million, but assuming it is, that's roughly 17 million people out of around 23 million uninsured (it could be as low as 16 million or as high as 18 million, I suppose, depending on the household size for this sub-group of the population). I presume the remaining 6 million or so received exemptions from the penalty for one reason or another.

And yes, the actual report you're citing even states it as 6.6 million tax returns, which means "households" not "individual people".

In fact, let's work it the other way: 6.6 million households x $190 apiece = $1.254 billion. Divide that by 17 million and you get $74 per person...which is pretty much what you'd expect when you take the half-price for children into account.

Even if it were, the number comes with two big caveats.

First, 250,000 of those people didn't owe the penalty at all because they qualified for one of ObamaCare's many exemptions. Another 50,000-plus paid too big a penalty. All told, these overpayments added up to $35 million, the IRS says.

Hmmm...there's that "people" reference again. Are we sure about that? Let's check the report itself:

As discussed in the Filing Season Review section of this report, WIRA and TAS Research have identified more than 300,000 taxpayers who overpaid their ISRP, totaling about $35 million through April 30, 2015. 13 Most of these taxpayers did not owe an ISRP because they were eligible for an exemption as a result of their low income. 14 The average ISRP overstatement amount was a little over $110 per return. 15

Nearly 250,000 of these taxpayers were eligible for an ISRP exemption. These taxpayers paid in over $27 million in ISRP. In addition, more than 50,000 taxpayers paid a total of nearly $8 million because the ISRP amount was miscalculated. These amounts include returns processed by the IRS through the end of April 2015. WIRA and TAS Research estimates from the Individual Returns Transaction File on the IRS Compliance Data Warehouse. This data is preliminary and is subject to change as the IRS reviews the data, processes additional TY 2014 returns, and conducts compliance activities.

I should also note that the fact that while 10% more people ended up paying the penalty than predicted, you can't blame the IRS for the 250K who weren't supposed to or the 50K who overpaid. If the cause had been an error on the part of the Treasury Dept or something then I supposed you could, but it doesn't sound like it was anything at their end in this case, so it's really more like 8% more, not 10%. Put another way, instead of 4.5% of the total paying the tax unnecessarily (300K / 6.6M), it's more like 1.7% (300K / 17M). However, this is a minor quibble.

The second big caveat is the fact that, whatever the administration says about the number of people paying the penalty, the actual money raised by the tax is far lower than had been predicted.

Assuming the IRS pays those 300,000 people back, the tax will have raised just over $1.2 billion this year.

That's well below the $2 billion that the Congressional Budget Office had projected just this March — 40% below forecast, as a matter of fact.

And yet...I'm not sure I understand why you think this is a Bad Thing®? I thought Republicans hated the individual mandate and especially hated taxes?? Shouldn't you be happy about people paying $781 million less in taxes than expected?

The point is that, as you saw in Exhibits A and B above, the Obama Administration can't win no matter how things play out. If lots of people pay the individual mandate penalty, then it's a sign that Obamacare is picking the pockets of Good Hardworking Decent Folk. If not enough people pay the individual mandate penalty, it's a sign that Obamacare is destroying the economy with "unfunded mandates". You said yourself that "more people than expected paying the penalty isn't good news"...except that you then proceed to complain about not enough being raised from the penalty.

Investor's Business Daily seems to be arguing that fewer people should pay the penalty, but that those who do should be charged more in order to increase the necessary revenue to help fund the law.

Which, as it happens, is exactly what's almost certain to happen next year: The penalty itself is anywhere from 2x - 3.4x higher (depending on whether you go with the 2% income or $325 per person amount), and I'm fairly certain that the number of people having to pay it will be several million lower than it is now. Mazel Tov!!

The IRS says the revenue numbers aren't final and could change. Even so, they're not likely to get anywhere near the CBO's initial forecast, which was made when the law passed in 2010 and which claimed that ObamaCare would cut the deficit in its first 10 years. Back then, the CBO expected the penalty to raise $9 billion in 2015.

Actually, no, that's not what they said. If you look at the actual CBO projection report that you linked to, here's what it says in Table 2:

"Penalty Payments by Employers and Uninsured Individuals"...not $9B from individuals alone. In fact, in Table 4, a few pages later, it states this flat out: 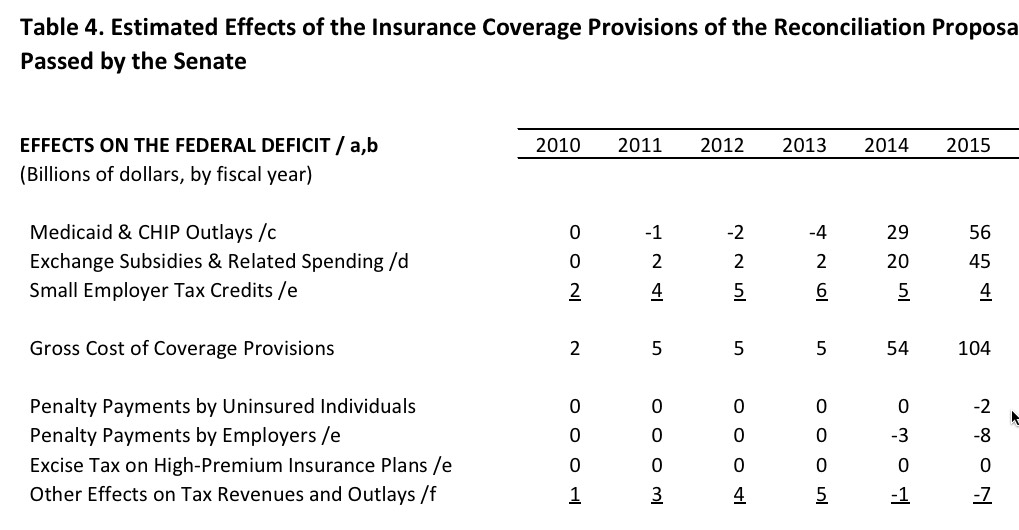 Huh. $2 billion in individual penalties and $8 billion in employer penalties. In fact, if you add them together, they come to $10 billion...a billion more than the earlier table! Gee, could it be that when the CBO is talking about a federal budget of nearly $4 trillion and other dollar amounts in the hundreds of billions, that perhaps rounding off by a few hundred million dollars is pretty much par for the course?

It seems to me that in the March 2015 revision, that $2 billion in estimated "Penalty Payments by Uninsured People" could just as easily have been more like $1.55 billion and just been rounded up, since all of the numbers shown are in whole billions. If that's the case, and if the final numbers end up being a bit higher than the estimate in the IRS's report, then who knows? The actual tax revenue could end up being higher than the CBO's estimate from both 2010 and 2015!

UPDATE: FYI, here's the IRS's press release, which makes it very clear that they're talking about 6.6 million returns, not individuals:

On tax returns processed through the end of April, taxpayers filed about 2.6 million returns with Form 8962, Premium Tax Credit (PTC), which reflected either the receipt of the Advanced PTC or new PTC claims for 2014. The average amount of PTC claimed per return was about $3,000. In addition, taxpayers filed about 6.6 million returns reporting the ISRP, and the average amount reported was about $190. About 10.7 million taxpayers filed Form 8965, Health Coverage Exemptions, claiming exemptions from the health-insurance coverage requirements. The IRS cautions that this data is preliminary and subject to change as it reviews the data, processes additional tax year 2014 returns, and conducts compliance activities.

...As a result of IRS data sampling and additional analysis conducted by TAS Research, it was discovered that more than 300,000 taxpayers overpaid the ISRP on tax returns processed through the end of April, the report says. Most of those taxpayers did not owe the ISRP because they were eligible for an exemption due to their low incomes. The report says the average ISRP overpayment was a little over $110 per return. The National Taxpayer Advocate has recommended that the IRS issue refunds to the affected taxpayers without requiring them to file amended returns. Since the majority of taxpayers use paid tax return preparers, most would probably spend more than the roughly $110 average overpayment amount in preparer fees if amended returns are required. At the time the report was finalized, the IRS had not made a decision.

It looks to me as thought the IRS uses "taxpayers" to refer to individuals vs. "returns" referring to households. That actually makes the "10.7 million taxpayers" filing exemptions work out pretty damned closely:

When you're talking about estimates, rounding off numbers, dealing with churn and so forth, a 1 million person discrepancy out of 320 million people total is pretty good in my book.