Nearly 2 months ago, I posted about Connecticut's insurance policy rate change requests from the 9 companies which plan on offering individual healthcare policies either on or off the ACA exchange, Access Health CT. The takeaway at the time was that, when weighted for the relative market share of each company, it looked like a statewide average requested rate increase of 7.7%, which isn't bad at all given the massive hikes being tossed around in some other states: 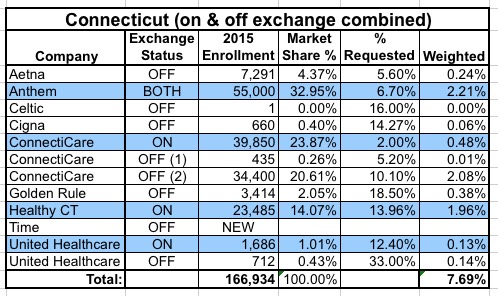 None of these have actually been approved yet, mind you...and in fact, just today it was announced that the CT Insurance Dept. will be holding public hearings to discuss the rate requests by three of the companies above: Anthem, ConnectiCare and Golden Rule.

Even before that happens, however, there's been some shifting: The first two companies, Anthem and ConnectiCare, have put in revisions to their earlier requests:

Some of the Anthem plans subject to the hearing are sold through the state’s health insurance exchange, Access Health CT, while all the ConnectiCare and Golden Rule proposals that will be reviewed during the hearings are sold outside the exchange.

Anthem is seeking to raise rates by an average of 4.9 percent for its plans, which have 34,553 policyholders in the state. ConnectiCare is seeking a 9.8 percent increase to plans with 34,000 policyholders, while Golden Rule proposed an 18.5 percent rate hike for plans that cover 2,000 policies. Anthem and ConnectiCare initially proposed different average increases but adjusted them after Access Health raised the fee it charges insurance plans to fund its operations.

Interestingly, not only are all three enrollment numbers lower than what I had listed earlier (Golden Rule is down from 3,414 to 2,000, ConnectiCare is down from 34,400 to 34,000 and Anthem is down dramatically from 55,000 to just 34,553), but the two companies which changed their requests appear to have lowered them, even though the reason for the change is the increased fee from the exchange: 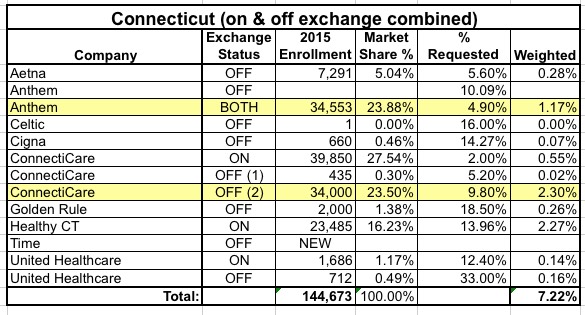 Anthem appears to have reduced their request from a 6.7% increase to just 4.9%, while ConnectiCare has gone from 10.1% to 9.8%. I'm not sure what to make of that, really; if I have this correct, it's certainly good news, but it doesn't make much sense to me given the fee increase.

Anyway, assuming have it right, between the reduced requests and the slightly-shifted market share figures, this means that the overall requested weighted average increase has dropped from 7.7% to 7.2%. This could drop even further after the public hearings, although it's also conceivable that the regulation board could increase the rates as they did in Oregon recently.