Three weeks ago I posted my best-guess estimates of just how many people would actually lose their federal tax credits in each state in the event of the Republican Party and CATO Institute winning the King v. Burwell case at the Supreme Court.

I also noted that if you cross-reference this data with this handy interactive map provided by Enroll America, you can even figure out roughly how many people would be screwed in every county in each state, by dividing the state-wide percentage receiving subsidies by the total number enrolled per county.

Finally, I noted at the time that you could even drill down further if you wanted to, to the zip code level, by using this massive Excel enrollment spreadsheet from the HHS Dept. itself. Again, take the total number of enrollees, divine the percentage currently enrolled & receiving subsidies state-wide by that number and you should get a rough idea of how many would lose those tax credits on a zip code-by-zip code basis.

More than one person suggested that I go one step further and slice up the King v. Burwell fallout by U.S. Congressional District...but that would really require a ton of work and goes beyond the scope of my available time. Great idea, however.

As it happens, just one week later, the CMS division of the HHS Dept. went ahead and released the actual state-by-state effectuated enrollment data...including the exact number of people receiving federal tax subsidies in each state as of 3/31/15. The grand total was almost identical to my estimates (around 6.4 million), and I was within 5% in 25 of the 34 states in question...not bad, although actually you have to tack on about another 100,000 to both totals to reflect the additional folks who enrolled during the Tax Filing Season Special Enrollment Period.

So...great! Now we have updated state-by-state numbers...but again, breaking things out by Congressional District would certainly be helpful, right?

Well, guess what? Families USA decided to do exactly that:

The Supreme Court ruling later this month in King v. Burwell could threaten the health coverage of millions of people. Our series of state-specific infographics shows that in each congressional district, there are thousands of consumers who are at risk of losing their health insurance. The map below shows the 34 states where 6.4 million Americans stand to lose the financial assistance that enables them to afford health coverage.

They then provide links to individual state-by-state Congressional District infographics. They only have the first 12 states so far; the other 22 states will be released on Thursday and next Tuesday:

I should also note that their methodology was exactly what mine would be if I were to have the time/resources to complete this project:

How We Calculated Congressional District-Level Estimates:

The end result of all of this number-crunching is that Families USA has provided Congressional District versions of the statewide Infographics which I whipped up about a week ago. For instance, here's the one I did for Alabama, followed by Families USA's CD-level version.

NOTE: For each state, my total number is slightly higher than Families USA's number because I'm also including the portion of the additional 100,000 or so people who should be receiving tax credits nationally since the end of March: 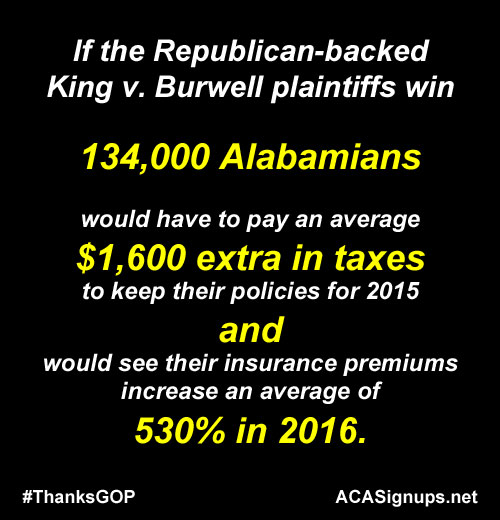 Bravo to Families USA for a job well done. Now if only the Democrats are smart enough to actually use all of these data and graphics...