Michigan: What's up with my home state re. King v. Burwell?

So, with all the fuss & bother over the imminent King v. Burwell decision, what's the deal here in the Wolverine state?

Well, first of all, here's what's at risk if the Supreme Court rules for the plaintiffs, Congress fails to pass a simple tweaking of the law to resolve the issue and the state administration fails to "establish" an exchange which passes muster with regard to the minimum legal definition required: 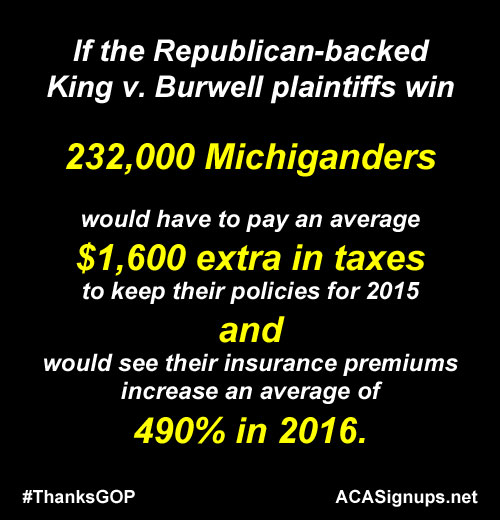 In addition to nearly all of those 232,000 people losing their healthcare coverage, I estimate that roughly 70,000 more people who aren't receiving federal tax credits would likely also have to drop their policies as well due to the exorbitant rate increases which would follow (or, at the very least, would have to downgrade to a far worse policy...from Gold/Platinum to Bronze).

Finally, there's also roughly another 210,000 Michiganders who are paying full price for ACA-compliant policies both on and off the exchange who probably would keep their coverage...but would pay through the nose to do so; a family of 4 earning $100,000/year, for example, might have a Gold PPO policy that they're paying $1,000/month for at the moment, which would likely spike 50% to $1,500/month. Perhaps $100 of that difference would be due to the normal rate increase, but the other $400 would be purely due to the GOP's shenanigans.

Again, I don't care how much money you make, having to shell out an extra $4,800/year for no other reason besides ugly political tricks stinks to high heaven.

SO, that being the case, what do GOP Governor Rick Snyder, the GOP state Senate and GOP state House plan on doing if the GOP-controlled Supreme Court strikes down federal subsidies and the GOP-controlled Congress fails to do anything productive? Jonathan Oosting ad MLive has the answer (sort of):

"He could have done it that way to begin with, but he wasn't really excited about that," said state Sen. Jim Marleau, R-Lake Orion.

"I think he'd have to. Our back is up against the wall, and we've got a lot of people in this state who are using it. That's the thing. What do you do with those people?"

To his credit, state Sen. Marleau has been one of the few voices of reason in the Michigan Republican Party on this issue since last summer:

Republican Jim Marleau chairs the state Senate Health Policy Committee. He says the federal health exchange has worked well for Michiganders since problems with the website were fixed late last year. But he says he’s still interested in a state-run exchange – especially if issues pop up again.

Snyder has half-heartedly supported Michigan having its own exchange in the past, and said something about calling for one if necessary after King v. Burwell is announced, but as Marleau noted, he seems pretty "meh" about actually following through.

(Note that the number cited in the article (228K) is actually slightly higher today due to the extra enrollments during the #ACATaxTime period).

Unfortunately, even some Democratic legislators seem to be a bit clueless when it comes to the potential fallout:

"It would be devastating to the residents here in Michigan (if they lost subsidies), but I really truly believe that if Republicans don't come up with a Plan B, that the Obama administration would," [Democratic Representative George] Darany said.

Rep. Darany, I appreciate your support, but you don't seem to understand that without Republicans at either the Congressional or State level cooperating, there's really not a damned thing that the Obama administration would be able to do in that scenario...confirmed by Marleau himself:

Marleau, who had expressed interest in revisiting the health exchange debate last year, isn't pushing the issue this session, saying he doesn't believe there is the political will or time for the state Legislature to set up a state version by the end of the year.

This glum assessment is immediately supported by the same disingenous idiot I took to the woodshed a couple of months ago, Patrick Colbeck:

Sen. Patrick Colbeck, one of most vocal Obamacare critics in Lansing, said he would fight "tooth and nail" against any attempt to set up a state exchange. He suspects the Supreme Court will rule against the Obama administration, and he believes that ultimately would be a good outcome for the state.

"Really, there's nothing we technically need to do except start promoting more free-market alternatives," said Colbeck, R-Canton. "Most of our citizens are going to be exempt form the personal mandate from Obamacare. We essentially get a get-out-of-Obamcare-free card."

Meanwhile, my number-crunching projecting a 50% rate spike is further supported by the executive director of the Michigan Association of Health Plans:

Ending the subsidies could create a "health insurance death spiral" in Michigan and other states that rely on the federal exchange, according to Rick Murdock, executive director of the Michigan Association of Health Plans.

If fewer people can afford the unsubsidized health insurance policies, sick customers would be more likely to retain coverage. That could lead to higher premium costs, further pricing out healthy customers.

"It's a spiral over a couple of years that would take place," Murdock said.

As for the executive order route, that's possible, but...

An executive order "could be an option," according to Murcock, who said his organization is awaiting a ruling and will be ready to advocate for a state exchange. "But ultimately, the Legislature is going to have to appropriate federal funds. Even if there is an executive order, there would have to be legislative involvement."