Two examples of how to present the 2016 Rate Request story

The angle being played is emphasized right off the bat with the big, scary-looking graphic above the story: 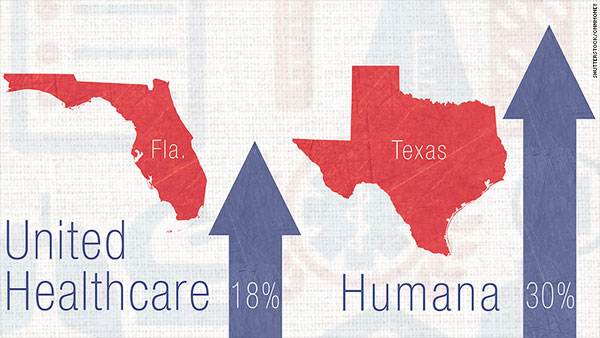 Even the sub-headline pushes the hair-on-fire meme:

Hold onto your wallets ... many insurers want to substantially hike rates on Obamacare policies for 2016.

Assuming anyone actually reads past the world-is-ending headers & graphic, the story itself, by Tami Luhby, is less panicky, though still pushes the "MASSIVE HIKE" angle:

To her credit, Ms. Luhby does makes sure to include the qualifiers: "proposing", "some", "wants to", "certain plans", "looking for", etc., so I'm giving her a pass on the "proposed, not final" front...and the mitigating factors (regulators can knock the increases down lower & some requests are much lower anyway) are noted later in the story...but not until the 7th paragraph. Fortunately, it's a pretty short piece, so it's not really "buried".

My main beef here is with the headline/graphic, which were both blatantly misleading but which likely weren't chosen by the reporter. My only real quibble with the story itself is that the original version didn't include any mention of the fact that only requests over 10% are listed on the government site. Fortunately, after mentioning this to Ms. Luhby, she added it a little later:

Insurers submitted their proposed rate hikes for individual policies sold both on and off Obamacare exchanges for review by state officials. The government's list includes insurers that requested increases of 10% or more. Insurers can opt to offer plans on the exchanges, directly or via both methods, but policies with similar coverage must be priced the same.

A couple of days ago I posted a case study in why this is important: In Washington State, only 3 out of 17 companies are requesting increases of over 10% next year; the rest are only asking for <10% increases...and in some cases are even planning on reducing their rates. Even more telling, only 3% of the actual plans being offered in 2016 are seeking >10% hikes.

Today I'm gonna give an example of how the rate request story was presented without the headline scaring the hell out of people: Dan Goldberg's story at Capital New York:

Yup, that's exactly what they did: They asked to increase their rates. Two companies asked for decreases, but the other 16 did indeed ask for hikes, so that's a fair assessment. There's also a graphic below the headline, but it's just a picture of some NY state Senator, presumably talking about insurance.

For the story itself, all emphasis is mine:

Health insurers are asking state regulators to approve rate hikes of more than 20 percent for some plans on New York State of Health, the insurance exchange created by the Affordable Care Act.

The state's Department of Financial Services on Tuesday posted proposed changes to insurance rates on the individual and small group markets, providing the first glimpse of what consumers can expect when they shop for health insurance next year.

The weighted average increase is 13.5 percent on the individual market and 14.3 percent for the small group market, according to D.F.S., but these are only requests. The rates can—and are likely to be—reduced by D.F.S. before they are approved.

“We will be scrutinizing the rate requests very closely and protecting consumers is a paramount objective in that process,” D.F.S. spokesman Matt Anderson said in an email.

He does mention the >20% hike request as the lede, but:

All of the above is done within the first 4 paragraphs (the first 5 sentences, actually).

The story goes on to discuss the pros and cons of the rate review/approval process, and then, most importantly, actually displays a reasonable bar graph showing the requested average rate requests for all 18 companies in New York: 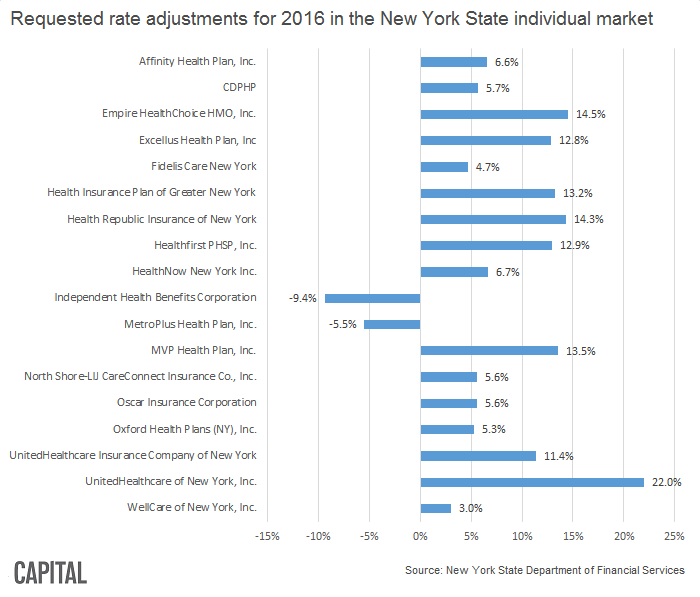 Again, if you were to only use the Rate Review website as your source for New York rate requests, you wouldn't see plans from 10 of the 18 companies listed above (well, you might see some plans from them, but there'd also be other plans from the >10% companies above which wouldn't be listed as well).

Now, to be fair, as it happens, in New York State, the weighted average increase request is in the double digits: 13.5% for the individual market, 14.3% for the small group market. And Mr. Goldberg has an advantage that Ms. Luhby didn't: He was provided with the complete, weighted numbers for his particular state.

My point here isn't to attack anyone; again, the fact that some companies are asking for large increases is a legitimate story. Rather, my point is to again emphasize the importance of reading past the scary headlines and thinking about what factors might be missing in the story before freaking out.