Throughout the long, tortured life of the Affordable Care Act over the past 5+ years, one of the easiest attack points has been to go after the sheer bulk and complexity of the law itself. Whether you're referring to the actual wording of the law (supposedly a whopping 2,700 pages long) or, even worse, the 8-foot tall stack of 10,000 - 20,000 pages of regulations related to "Obamacare", Republican politicians, pundits and talk show hosts have used the immense size of the ACA itself to go after it.

I'm bringing this up now because my big project the past week or two has been to track down the various 2016 policy premium rate change requests for the companies operating both on and off the ACA exchanges in all 50 states (+DC, of course).

Tonight I decided to tackle Virginia. The good news is that unlike some states, their rate filing database is actually pretty straightforward and easy to search. Furthermore, the actual filing forms seem to be pretty consistent.

The bad news is...well, check this out:

For one company. In just one state. For just one category of their insurance policies.

Think that's bad? If and when I ever slog through that behemoth to hunt down the average rate increase for Aetna PPO policies, I still have 30 more to go...for Virginia alone: 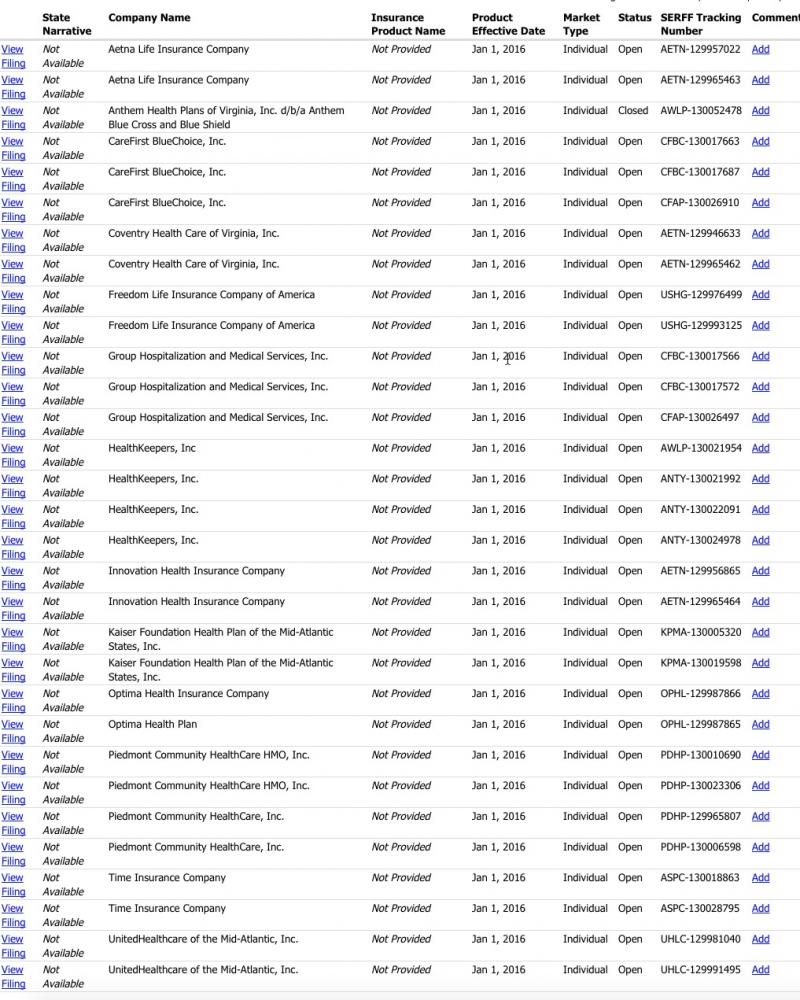 Here's the thing about all of this: Yes, I'm sure that some of this insane mountain of paperwork is due to ACA requirements. However, the bulk a huge chunk of these thousand-page-plus documents already had to be created by the companies before the ACA came along. The company actuaries have had to dig through all sorts of data like this in order to figure out how much to change their pricing from year to year for decades.

In light of that, "Obamacare is 2,000 pages long!!" seems like a wonder of brevity by comparison.

Update: OK, to be fair, not all of the filings are this insanely lengthy; some are "only" 40-50 pages. In addition, a couple of folks in the comments in a position to know such things inform me that a larger portion of this paperwork is due to ACA requirements than I had thought. Fair enough. However, even if, say, 75% of it is ACA-specific, the example above would still have been 1,500 pages with or without the ACA.

Even so, my larger point still stands: The private insurance industry has always required an absurd amount of paperwork through the years. In addition, according to the Washington Post fact-checker linked to above:

Regular readers know that we frown on such page-counting exercises, since we’re not sure what it really tells you. In the case of the health-care law, businesses actually have been seeking detailed regulations so they know exactly what to expect.

In other words, as Rebecca Stob (an actuary in Washington State) notes in the comments below:

...a lot of that is overall a good thing because it forces a level of standardization, transparency and oversight into the mechanics of how the risk pools in the states are operating and how carriers are complying with the new rules and mechanisms that prevent discriminatory benefits and pricing and cherry picking the risk pool.

And using the same methods used by the McConnell team, we found tens of thousands of pages of regulations for Medicare Advantage and the prescription drug plan (Medicare Part D), which were pushed by Republicans.

The larger point is this: Health insurance is a complicated business. Always has been, always will be...especially when it includes a profit motive. Fifty states with hundreds of companies offering thousands of different policies to millions of people adds up to a buttload of paperwork and data, so any law relating to all of that is going to be inherently lengthy...whether created by Democrats or Republicans.

Meanwhile, I'm off to slog through the filings again...