In addition, the "average % requested" is rounded off to the nearest percent instead of by tenths...and in some cases even that seems to be wrong (for instance, in the Small Group listings, Aetna Health and Aetna Life have 6% and 9% listed...but when I looked at the actual filing documents, the requested average increases were 9.5% and 8.0% respectively).

Finally, in some cases there are 3 or 4 different rate filings which appear to be the same except they have different average percent increases. Some of these are on- vs. off-exchange filings, but some I can't figure out for the life of me. Eventually I gave up and just listed all of them as is.

With all that in mind, the best I can do for now is an unweighted average in each market, which is, frankly, meaningless. As you can see, the unweighted individual average appears to only be around 9.3%...but CareFirst has a commanding 79% market share of the exchange-based enrollments and an unknown share of the total market when off-exchange enrollments are included...and they're asking for a whopping 27-30% increase. 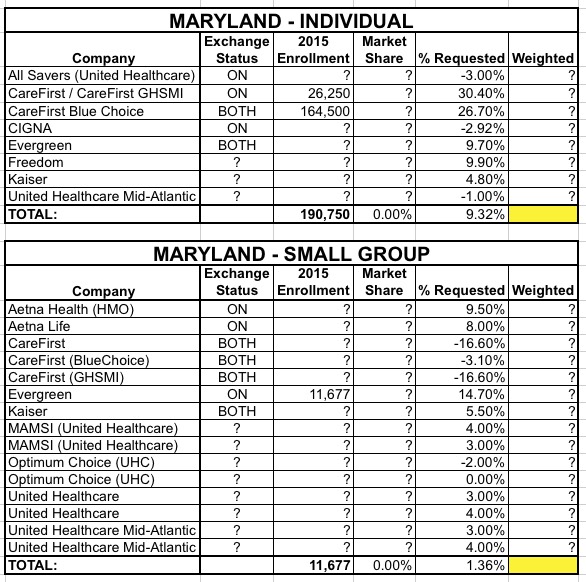 Kaiser Permanante is the 2nd largest insurer on the MD exchange with 15% of the enrollees and is only asking for a 4.8% increase...but again, I have no idea what their off-exchange enrollment is.

Assuming CareFirst's total share of Maryland's individual market is around 80%, that 27% or so rate hike request from them (assuming it's approved) wouldn't be moved easily by the other half-dozen companies combined. For instance, let's say that all 6 of the other companies were keeping their rates exactly as is (0% change). The average increase, assuming every current enrollee stays with their current insurance provider, would still be around 21.6% overall.

Here's what the weighted average increase looks like assuming the exchange-based market share for each company is also representative of the off-exchange numbers...which may or may not be the case: 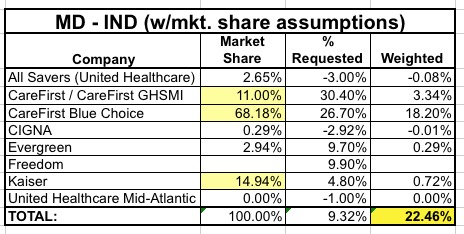 And that's the other major key, of course. what happens if thousands of CareFirst enrollees see that 28% rate spike this fall, spaz out and switch to one of their competitors...like, say, CIGNA, which is dropping their rates by nearly 3%? If that happens on a large enough scale, then all of a sudden the "average premium change" is far lower than 30.4%, 27% or even 21.6%.

All of this assumes that these requested rates are actually approved, of course.