Shortly after my not (semi) successful campaign to shame Michigan State Senator Patrick Colbeck and the Detroit News into correcting the record in his absurdly off-base Op-Ed piece a couple of weeks ago, the News decided to run a response Op-Ed, submitted by Marge Robinson, the president of SEIU Healthcare Michigan.

Since I made such a fuss over Colbeck's jaw-dropping laundry list of factual errors and omissions, I figure it behooves me to give the same scrutiny to the follow-up from a "union boss". Let's take a look:

They said it wouldn’t work.

They said no one wanted it.

They said it would destroy the economy.

They said it would create chaos in the healthcare industry and cause masses of people to lose their insurance.

They said no one would sign up for it; especially healthy and young people.

They even said it would lead to “death panels” deciding who will live or die under Obamacare.

Yup, all of the above checks out: Multitudes of Republican politicians, FOX News talking heads and other conservatives pundits spent 5 years screaming about all of the above.

...Nearly every myth, lie, and unwarranted criticism of the ACA has not only been disproved by the reality of the program, but in many cases shown to be almost entirely without merit.

Yup. I already documented most of this here last fall and again just the other day.

OK, let's get into the actual factual claims:

As the White House has noted, the law has been a success across the board in reducing the rate of being uninsured among the elderly, low income and young. The Affordable Care Act allows states to expand eligibility for Medicaid, and 28 states and the District of Columbia have done so. Across all 50 states, there are now 11.2 million additional Americans enrolled in Medicaid.

Actually, it's even better than that: For one thing, the number of states which have expanded Medicaid via the ACA is now up to 29 (plus DC), as Montana just expanded it about a week ago. Meanwhile, the latest figures from the CMS report state that there's been a net increase of 12.6 million if you include nearly a million "bulk transfers" from other state-run programs prior to October 2013, or 11.7 million if you don't. Of course, that only runs through 2/28; if you include additonal enrollees for March and April, it should be closer to 13.4 (12.5) million as of today, although that's just an estimate on my part.

Most significantly, the uninsured rate for non-elderly adults has dropped by 35 percent since October 2013.

Well, technically 33.9% according to Gallup's most recent monthly survey (from 18.0% to 11.9%), although other national surveys by the Urban Institute, Commonwealth Fund, RAND Corporation and so on range a bit higher or lower depending on their methodology. Still, 35% is pretty reasonable.

Hmmm...I'm not sure which survey/source she's using for the 13 percent point drop (I assume that by "nearly double" she's saying that the non-expansion states dropped by about 7 points). According to the most recent Urban Institute survey from a few weeks ago, the actual change from Q3 2013 to Q1 2015 was:

Since the total uninsured rate nationally was somewhere around 16-19% (depending on the source) prior to the exchanges launching, a "13 percentage point" drop would be absolutely astonishing even if limited to a subsection of states, since that would translate to a 68% - 81% drop, so this doesn't sound right to me. However, Ms. Robinson didn't include any source names or links. SEE UPDATE BELOW

In Michigan, Gov. Rick Snyder recently said more than 603,000 Michiganians have enrolled in the “Healthy Michigan Plan,” an expanded Medicaid program funded by the ACA. It provides health insurance to low-income working people for a minimal cost. The Detroit News noted that since it was launched on April 1, 2014, 100,000 more people than predicted for the two-year enrollment signed up for the program.

Yes, all of this is accurate, and yes, it's about 100K higher than expected, although MI's Medicaid expansion enrollment total has dropped off a bit since reaching a peak of 604,381 on March 31st as people move in and out of the system (as of this week it's at around 578,000).

Besides making near-universal healthcare available to the poor and hardworking families of this country who could not afford it otherwise, there are other major benefits to the ACA. Prior to its passage, health insurance companies could deny you coverage or charge you more because of a health problem that you had prior to applying for insurance. Under the ACA, health insurance companies can’t refuse to cover you just because of your pre-existing condition and they can’t charge you more than someone who doesn’t have the problem.

This has meant as many as 129 million Americans with pre-existing conditions are no longer at risk of being denied coverage. This includes the parents of more than 17.6 million children.

Hmmm...that 129 million figure is pretty specific, but is then given the "as many as" qualifier to get her off the hook. Still, according to a PolitiFact study of this from September 2013, it sounds in the ball park (they concluded that the number is anywhere between 19-50% of the total population depending on the methodology/definitions, which means somewhere between 60 - 160 million people.

As for kids under 18 with pre-existing conditions, the best check on this I was able to find was a 2012 FactCheck.org study which stated that:

...the 17 million figure represents the administration’s high-end estimate for the total number of children, under 18, in the country who have some condition that could, potentially, cause them to be denied coverage, or charged a higher premium.

I'm not sure where the more-specific "17.6M" number comes from, but it sounds like this may be somewhat exaggerated...although again, she's careful to use the "at risk of being denied" caveat to cover herself here.

Of course such success hasn’t stopped critics of government-supported health care from spreading misinformation and attempting to scare people in spite of the evident reality of success; most Americans still remain ambivalent about the ACA. So much so, that every announced Republican candidate for president in 2016 has vowed to repeal the program.

Yup, that's a pretty fair assessment, although some of them are starting to use language other than "repeal" and whoever wins the GOP nomination will probably try and walk that back somewhat during the general election.

But just as there were unrelenting critics of Medicaid and Medicare, so there will be with the ACA. In time, however, most rational people have come to realize that access to affordable healthcare is not only a good thing, but a fundamental right of any human. And in spite of all of its critics and detractors, Obamacare works — scare tactics and mythology notwithstanding.

Well, who you define as being "rational" or "irrational" obviously varies depending on who you are, but certainly only 29% - 35% of U.S. adults want to actually repeal the ACA at this point, while everyone else seems to either be OK with it as is or just wants to make some adjustments to it.

Conclusion: Like Sen. Colbeck, Ms. Robinson should have cited her sources for her claims, and a couple of them seem to be a bit questionable. Unlike Sen. Colbeck, however, for the most part her claims are either on the money or at least in the ballpark. The one which does stand out as bothersome is the "13 percentage point drop" in Medicaid expansion states, which makes little sense to me.

UPDATE 5/8/15: OK, thanks to Ken Kelly for explaining the source of the "13 percentage point drop" reference. It comes from this table taken from Gallup data from the ASPE: 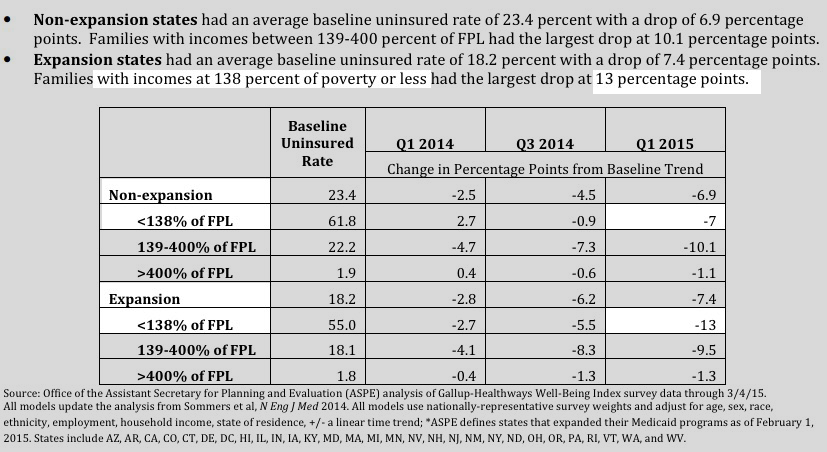 And this is why including proper sentence structure and punctuation is so vitally important. What this table shows is that the uninsured rate among those below 138% of the federal poverty level did indeed drop 13 points in expansion states vs. 7 points for non-expansion states, or "nearly double".

HOWEVER, look at how Ms. Robinson worded it in her Op-Ed (my emphasis removed so you can read it exactly as she wrote it):

Do you see the problem? By wording it this way--and especially by not including the crucial comma between "...Medicaid program, for people with incomes below...", it makes it look as though she's referring to the entire state populations, with the "<138%" descriptor appearing to simply clarify the nature of the expansion in those states as opposed to referring to that particular subset only. In this context, a 13 point drop makes total sense, since the "<138%" population is precisely who Medicaid expansion was targeted at.

For the states at large, the difference is much smaller: a 7.4 point drop vs. 6.9 in non-expansion states.

Here's a more obvious and amusing example (even if it turned out to be a Photoshopped fake): 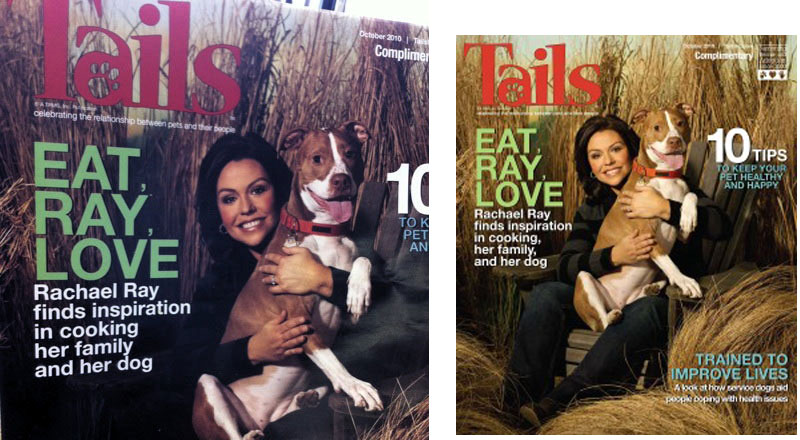 Don't get me wrong; I've made plenty of grammatical errors and typos (I'm especially bad about using apostrophes in "it's"), but my mistakes don't usually cause this sort of confusion.