UPDATE x3: Bloomberg Poll: Only 35% of Americans want to repeal Obamacare, & a disproportionate number are those impacted the least

Apparently the answer to the question "How many times will they vote to repeal the ACA before giving it up already?" is "67" (or in the mid-50's, depending on your definition).

After five years and more than 50 votes in Congress, the Republican campaign to repeal the Affordable Care Act is essentially over.

GOP congressional leaders, unable to roll back the law while President Obama remains in office and unwilling to again threaten a government shutdown to pressure him, are focused on other issues, including trade and tax reform.

Less noted, senior Republican lawmakers have quietly incorporated many of the law's key protections into their own proposals, including guaranteeing coverage and providing government assistance to help consumers purchase insurance.

And although the law remains very unpopular with GOP voters, more than 20 million Americans now depend on it for health benefits, making even some of the most conservative Republicans loath to cut off coverage.

This is a nice segue into the main point of this entry: Brian Beutler notes over at The New Republic that a new Bloomberg News poll finds that not only do 63% of Americans feel that the ACA should either be left alone or at least be given some time to see how it goes, but even of the 35% who do want to repeal Obamacare, a big chunk of those appear to be elderly people who aren't directly impacted by the law (for the most part) anyway.

As Beutler notes regarding an elderly woman who was quoted for the Bloomberg story:

At 83, her frustrations with out-of-pocket health care costs are at best only tangentially related to Obamacare. She isn’t shopping for insurance on the federally facilitated Alabama exchange. She’s on Medicare. And she probably isn’t unhappy that the law increased her taxes because it almost certainly didn’t.

Only a third of the country supports full repeal, and, like the Republican coalition itself, it is a very old third—comprised of the only people in the country with almost no stake in the law’s core costs and benefits.

Basically, this is the "Get Off My Lawn!" crowd. As Buetler concludes:

This isn’t a revealed bias, as when Washington Examiner’s Byron York wrote that Obama’s “sky-high ratings among African-Americans make some of his positions appear a bit more popular overall than they actually are.” It’s an argument that we shouldn’t give everyone’s views about Obamacare equal weight. The public sentiment animating the repeal movement is derived from people who have a negligible stake in the law, but who would like to throw millions of people off their new insurance plans before they die. Presumably we’d have no problem ignoring old people if they objected to child tax credits financed by working-age people. We should ignore them in this instance, too.

In other words, this is like me going to a restaurant and screaming at someone else's family about what they ordered for dinner. I'm not the one eating the meal, I'm not the one paying for the meal, so what business is it of mine to decide what should be on the menu or how much it should cost?

Of course, as Buetler does note, "Their opinions matter insofar as they’re eligible to vote, but for heuristic purposes we should ignore them."

UPDATE: Unfortunately, the Bloomberg poll doesn't actually break out the responses by age group to figure out how many of those 35% are over 64, and you can't directly slice it up by overlapping the Kaiser Family Foundation data, but I'll take a crack:

OK, next, let's look at the KFF numbers.

Obviously it's not quite that extreme. The KFF data shows that at the moment, 46% of seniors "disapprove" of the law. Even assuming that all 46% of those want full repeal, that's still just 8.5% of the total Bloomberg respondents (ie, 46% of 18.4%). That means that only 24.3% of the REPEAL!! crowd are elderly...still a disproportionate chunk, but not as dramatic as laid out above.

This in turn means that, if my calculations are correct, if you subtract the elderly out of the equation, you're left with only around 32.5% of those under 65 who want the law repealed:

Hmmm...OK, so it's not quite as dramatic as Buetler's article suggested, but that's actually clear from the KFF data anyway (46% of seniors disapprove vs. 42% of those under 65). Still, the bottom line is that less than 1/3 of the affected population supports repeal at this point.

UPDATE x2: TItle changed. As Esther F. pointed out, it's not quite fair to say we should "ignore" the senior disapproval here; as Buetler did note, they do tend to vote in a higher proportion than younger folks. However, his larger point is that a disproportionate portion of those griping about the law are the ones least impacted by it.

As an aside, I was unaware (until today) that York had written such a disgustingly racist statement back in 2009. Apparently Obama's approval rating among African-Americans "doesn't count" because they aren't "real people" or somesuch nonsense. This is the exact point I made last week regarding those who ignore Medicaid enrollees when counting how many people have gained health coverage over the past year and a half:

OK, so 8.2 million working class / middle class Americans will lose their coverage. That still leaves a net gain of 7 million or so, right?

Well, sure...assuming, that is, that you consider people on Medicaid to be human beings.

Yes, of course I do, and it's shocking that the clarifier above needs to be stated at all, but for a lot of Republicans,"...but almost all of the gain is thanks to Medicaid!!" seems to be a rallying cry that they use to suggest that people on Medicaid "don't count" or are some sort of anomaly.

Why? Because to (many) in the GOP, Medicaid is for Poor Lazy America-Hating Moocher-Takers, paid for by Hard-Working God-Fearing Tax-Paying Patriotic People, bla bla bla. As such, they Don't Count® as being "newly insured" because of course they don't.

...which in turn reminded me of the 2008 election, which referenced exactly the same sort of garbage which York wrote right after the election:

It reminds me of all the people who, after Barack Obama crushed John McCain in 2008 (70 million to 60 million), said that he "only won" because "so many Black people voted". As if this somehow makes his winning the Presidency with more votes than any other candidate in history any less significant. After all, every other President "only won" because "so many men voted" or "so many U.S. citizens over 18" voted, but somehow that didn't make anyone question the legitimacy of their administrations.

UPDATE x3: Hah! The Kaiser Family Foundation just came out with their own new monthly tracking poll, and the results are even better for the ACA, although the wording is a bit different:

What Should Congress Do Next About The ACA?

The public continues to be divided about what they would like to see Congress do next with the law. Just under half want Congress to either expand what the law does (24 percent) or continue implementing it as is (22 percent), while about 4 in 10 want to see Congress either scale back the law (12 percent) or repeal it entirely (29 percent). These shares have remained constant for nearly six months.

That's just 29% who cry REPEAL!!, 46% who say leave it be or expand it, and 12% who want it "scaled back", although it's pretty open to interpretation as to what that means, exactly.

There's a bunch of other interesting stuff at the KFF survey, of course, but for purposes of this entry, the main data point is that unlike Bloomberg, KFF does provide an age group breakdown in their methodology:

However, the Kaiser poll also gives us another demographic nugget which Bloomberg didn't...it breaks things down by partisan identification:

With that in mind, here's how things break out: 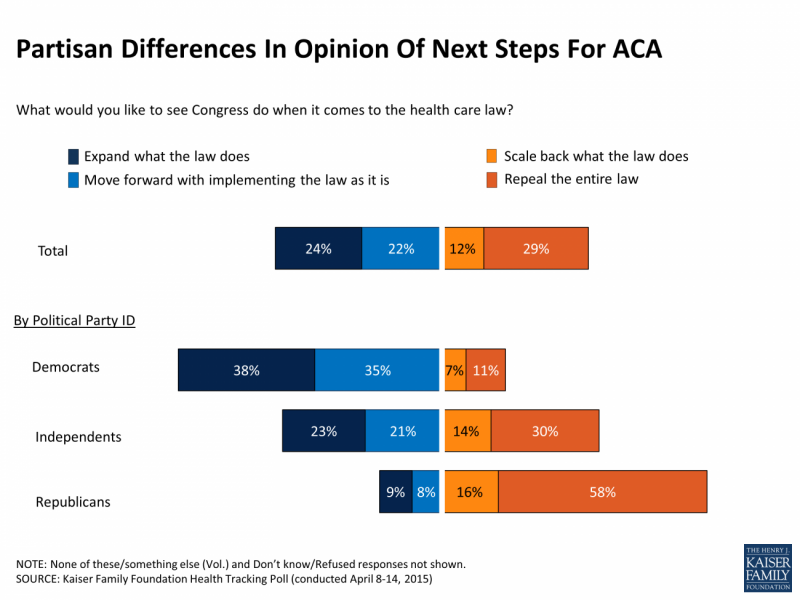 Well color me shocked. Almost exactly 50% (216 of 436 total) who say they want to flat-out repeal the ACA are self-identified Republicans (32% are Independents, 12% are Democrats, 6% refused to identify themselves).

Again, I fully recognize that the "Repeal!! Republicans" obviously do vote, but if you were to take them out of the loop, that would cut the "REPEAL!!" cry in half to just 15% of the adult U.S. population. Just saying.