A huge thank you to Hannah Recht for the link to last week's Covered California board meeting dashboard report, which contains this crucial slide: 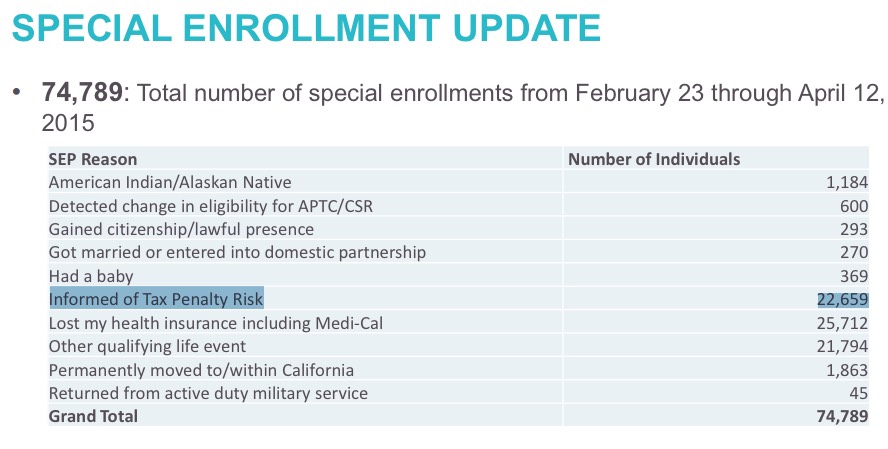 This is incredibly useful! Not only have they given an updated #ACATaxTime tally (22,659 as of 4/12, up from 18,000 as of 4/05), but they've also given the other off-season QHP enrollments for California since Open Enrollment ended. As a bonus, they've even broken out those other QHPs by the specific reason, which is a first for any exchange report, I believe!

As an aside, the report also confirms that around 15,644 employees were enrolled in SHOP (small business) policies as of March 1st, a bit lower than the 16,000 round-figure given a month or so ago. Assuming 2.5 covered lives per employee enrolled, that means CA should have around 40K total covered lives via SHOP.

Before people look at this and say that I'm underestimating the off-season average, let me explain: For 2014, I had estimated that around 9,000 people per day were enrolling during the off-season nationally, and I stand by that this year. However, as I noted yesterday, I've lowered my off-season estimate to 7,000/day to be on the safe side:

In other words, this news out of California strongly supports my estimate that at least 7,000 people are enrolling nationally every day, during the off-season, not including the #ACATaxTime SEP.

What this also means is that, while the confirmed QHP selection total to date now stands at 11,864,835, I'm virtually certain that the total to date is actually around 12.2 million.

Finally, the breakout of the reasons for the additional 52,130 enrollments is interesting as well. Again, I have no idea how representative CA is of the nation at large; the American Indian/Alaskan Native ratio, for example, is likely much higher in some states than others. However, here's how it's breaking out in CA so far:

The fact that nearly 42% are listed as "other" makes this breakout less useful than it would otherwise be, but it's still better than nothing. The only official changes not listed are adoption/foster care (which I doubt make up a huge number) and being released from prison, which I also suspect doesn't make up a large percentage. Presumably most of the "Other" are actually one or more of the other listed options.