Montana: No wonder the Obamacare attack ad "victims" all had their math wrong; the Koch Bros can't even count!

Hey, remember the story from earlier about how ACA Medicaid expansion in Montana (which failed by 1 vote due to a comedy of errors resulting in a Democratic state legislator who supported the effort inadvertantly voting against it) is back on the table again and looks poised to finally go through?

Well, apparently the Koch Bros and their puppet organization, "Americans for Prosperity" (AFP), are also aware of this and have been lobbying, screaming and generally making a nuisance of themselves throughout Montana in an attempt to prevent this from happening (because God knows that 45,000 - 70,000 low-income Americans having healthcare coverage would be a horrible thing for some reason or another).

In fact, they've been so obnoxious about their efforts that the people of Montana, generally considered a fairly "red" state which you'd think would be partial to their position, have pretty much asked them to GTFO and go pound sand:

Dozens of voters shouted down paid staffers from a Koch brothers advocacy group that targeted a Montana Republican lawmaker who is open to expanding Medicaid in his state.

State Rep. Frank Garner has refused to sign a blanket pledge against expanding Medicaid under the Affordable Care Act, and Americans for Prosperity-Montana is campaigning against him and two other lawmakers — state Reps. Jeff Welborn and Tom Berry — who have done the same.

The Koch-sponsored group is blanketing their House districts with mailers that show each lawmaker’s face superimposed over a photograph of President Barack Obama.

About 100 people turned out for a town hall meeting Thursday in Kalispell that was promoted by AFP, and Garner traveled eight hours from Helena to speak with his constituents after a reporter told him about the event, reported the Flathead Beacon.

“I support their right to have an opinion. I just didn’t like how they did it,” Garner said. “They didn’t even extend the courtesy of telling me about the meeting. What does that say about their intentions?”

Anyway, now that the new Medicaid expansion measure seems almost certain to finally go through and get signed into law, the AFP has launched a rather laughably pathetic hashtag social media campaign against the bill called "#MillionsOfMontanans":

Of course, in addition to all of the blatant lies and fact-twisting that the AFP is throwing around as usual, there's one other tiny little problem with this campaign: 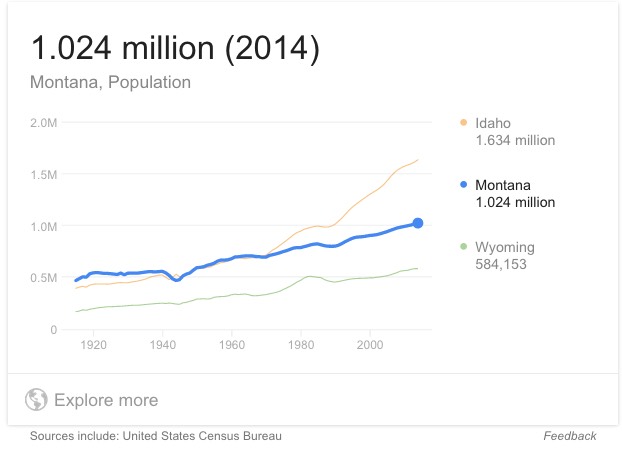 I guess "#1MillionMontanans" was being used for some other promotional campaign.

UPDATE: OK, it looks like I'm a little late to the party on this one and there's a little bit more to the story, but the basic idiocy on AFP's part is the same:

Shortly after the passage, Americans for Prosperity Montana state director Zach Lahn released a statement that stated, “We are deeply disappointed in the legislature’s decision tonight to expand Medicaid. This decision stands directly against the voices of millions of Montanans who have made it clear that they do not want more Obamacare.”

After the Tribune received the release and state government columnist Kristen Inbody tweeted it out, the misstatement took on a life of its own.

“...AFP gaffe proves they have NO IDEA about Montana, claim #MillionsOfMontanans agree with them! #mtleg #facepalm,” the blog Montana Cowgirl posted.

“If there were actually #MillionsofMontanans, maybe we could actually make #MillionsOfMontanans trend,” posted Melanie Hall, commissioner of the Montana Division of Banking and Financial Institutions.

...all of which makes the AFP's attempt to salvage what was left of their dignity by embracing the very hashtag which crystalized their ignorance of the very state they're attempting to influence all the more asinine:

Even AFP-Montana embraced the hashtag, using it in its posts Friday: “#millionsofmontanans tax dollars will now be spent on a program that is failing its patients. #MedicaidExpansion #mtpol #mtleg.”

The AFP seems to think that using the #MillionsOfMontanans hashtag in an "ironic" manner will somehow endear them to the people of Montana. Perhaps it will, but it's more likely just going to cause even more people to (correctly) realize that they're idiots who didn't bother checking the population of the state they're targeting before launching a social media campaign.

There's a right way to do self-deprecating humor and a wrong way. Here's an example of the right way:

Needless to say, the AFP has chosen the wrong way, just like they have on every other issue.