Montana on verge of correcting one stupid mistake; New Mexico suffering consequences of another 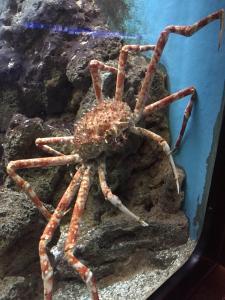 I'm back from a short vacation to Chicago (we had a blast, thanks for asking...visited the Shedd Aquarium, Adler Planetarium and Museum of Science & Industry), so obviously my in box has built up quite a bit of ACA news over the past week.

It'll take awhile to sift through everything, but in the meantime there are some state-specific developments which stand out:

MONTANA: A couple of years back, Montana held a vote on the ACA Medicaid expansion provision. It was a tight vote, but should have passed...unfortunately, one state legislator accidentally voted the wrong way on the bill. Seriously:

Some states have declined to expand Medicaid because they oppose Obamacare. Others worry about the financial burden of expanding the entitlement. But there appears to be only one state where the Medicaid expansion failed due to a Democratic legislator accidentally voting against it.

“We’re tremendously sorry about what happened,” Minority Leader Chuck Hunter, a Democrat, said of the mistaken vote. “Montanans are the losers in this outcome.”

There's a lengthy and rather stupid story behind the messed-up vote, but the bottom line is that for 2 years a good 45,000 Montanans have been left twisting in the "Medicaid Gap".

Cut to this week:

One day after a lengthy floor battle to free a Medicaid-expansion bill from committee, the Montana House Thursday endorsed the measure, voting 54-46 to accept millions of federal dollars to extend subsidized health coverage to thousands of low-income Montanans.

“I think this is the right thing to do, it’s the right time to do it,” said Rep. Rob Cook, R-Conrad, who carried Senate Bill 405 on the floor. “Let’s pass this bill.”

It's not quite over yet, but the outcome seems to be pretty solid at this point:

Thirteen Republicans and all 41 House Democrats supported the measure Thursday, setting up a final House vote later this week.

If the state Senate accepts the one amendment attached Thursday by the House -- a likely prospect --– the bill goes to Democratic Gov. Steve Bullock for his signature.

Bullock hasn’t said whether he’d sign the measure, but his top health care adviser has testified twice in favor of SB405 in hearings before legislative committees this session.

The New Mexico Health Insurance Exchange board has decided to drop plans for building a state website for individual consumers and instead will continue using the federal website.

Forging ahead with the technical work for a wholly state-based operation would be more costly and would not provide the same level of customer support as the federal Healthcare.gov site is able to deliver, said health exchange CEO Amy Dowd.

Currently, 13 states and the District of Columbia have state-run exchanges. New Mexico has a hybrid system in which the state-operated BeWellNM.com website is used only for small businesses seeking to purchase health insurance. For individuals, the state site acts as a portal to the federal website.

Some health exchange board members are concerned the decision, approved 8-4 on March 31, means New Mexico will lose control.

Assuming the Supreme Court shoots down the King v. Burwell plaintiffs in June, this won't be a significant development (and in fact, if it does end up being smooth sailing going forward for Healthcare.Gov federal tax credits, I wouldn't be at all surprised to see other states such as Vermont, Rhode Island and Minnesota making the same move to HC.gov that Nevada and Oregon already have).

HOWEVER, if King v. Burwell does go in the plaintiff's favor and if the SCOTUS decides to twist the knife even further by deciding that Oregon, Nevada and New Mexico's "Federally Supported" State-Based Exchanges "don't count" as being "established" by the respective states...then this will prove to be a doubly terrible decision on the part of the NM exchange board.

I should also note that there's a lot more to the next part of the article than meets the eye:

The health exchange won’t have to start paying to use the federal website until 2017.  Franchini estimates the cost could be $3 million to $5 million annually, but the final amount probably won’t be set until late 2016, he said.

The exchange has spent more than $8 million in federal money to build a market website for individuals. The site was about 75 percent completed — although it was untested — when the federal Center for Medicare & Medicaid Services (CMS) changed the design guidelines last fall.

The exchange applied for $97 million to meet the new guidelines and pay some other costs, but CMS denied that request in November.

Here's the backstory: The Republican Governor of New Mexico, Susana Martinez, apparently cost her own state nearly $100 million purely by being unnecessarily rude and sarcastic to the Center for Medicare & Medicaid Services. Seriously:

The second phase build out is a 20-month process that was supposed to start in January 2015 and run through September 2017, when New Mexico’s system would be run entirely in-state. There’s even a nifty timeline of all the things to be done:

(Timeline for implementation of NMHIX, fr. NMHIX board presentation, Jan, 2015)

But when the state submitted it’s application to the federal government for funding, it included letters from state leaders, including Governor Martinez and then-Secretary of Human Services, Sidone Squier.

NMHIX staff told their board in January that the feds specifically cited those letters in their denial.

“Letters attached to the application indicated [the] state was questioning the benefit of the changes that were required,” staff wrote in a January presentation to the board.

...“I am concerned, however,” Governor Martinez wrote, “that New Mexico’s need to apply for this additional grant funding is due to your department’s decision to require changes in our state’s exchange design.” “The amount of funding represented in the application greatly exceeds that necessary to produce our vision for an exchange,” she continued.   She went on to blame the federal agency, saying it had “exacerbated” problems by requiring New Mexico follow federal guidelines in building a one-stop-shop system for all New Mexicans.