This is the first time I've updated The Graph in awhile, for an obvious reason: Since the end of Open Enrollment (including the "Waiting in Line" extension period) there's only been a tiny smattering of data updates, from Colorado, DC, Maryland, Massachusetts, Minnesota and Rhode Island...and only 2 of those include any of March. Slim pickings indeed. Of course, the #ACATaxTime Special Enrollment Period kicked off on the 15th in most states, so things should have picked up, but unless the HHS Dept. surprises me, you're not likely to hear anything official about it until after April 30th (and possibly not even then). (Update: Yay! They'll issue some sort of enrollment update next week after all!)

Still, based on the snippets of data I do have since 2/22, along with last year's off-season pattern and some educated guesswork for the tax season SEP, here's where I think things should stand as of Monday, March 23rd, 2015...otherwise known as the 5 year anniversary of the Affordable Care Act being signed into law by President Obama (make sure to click the image for a higher-resolution version): 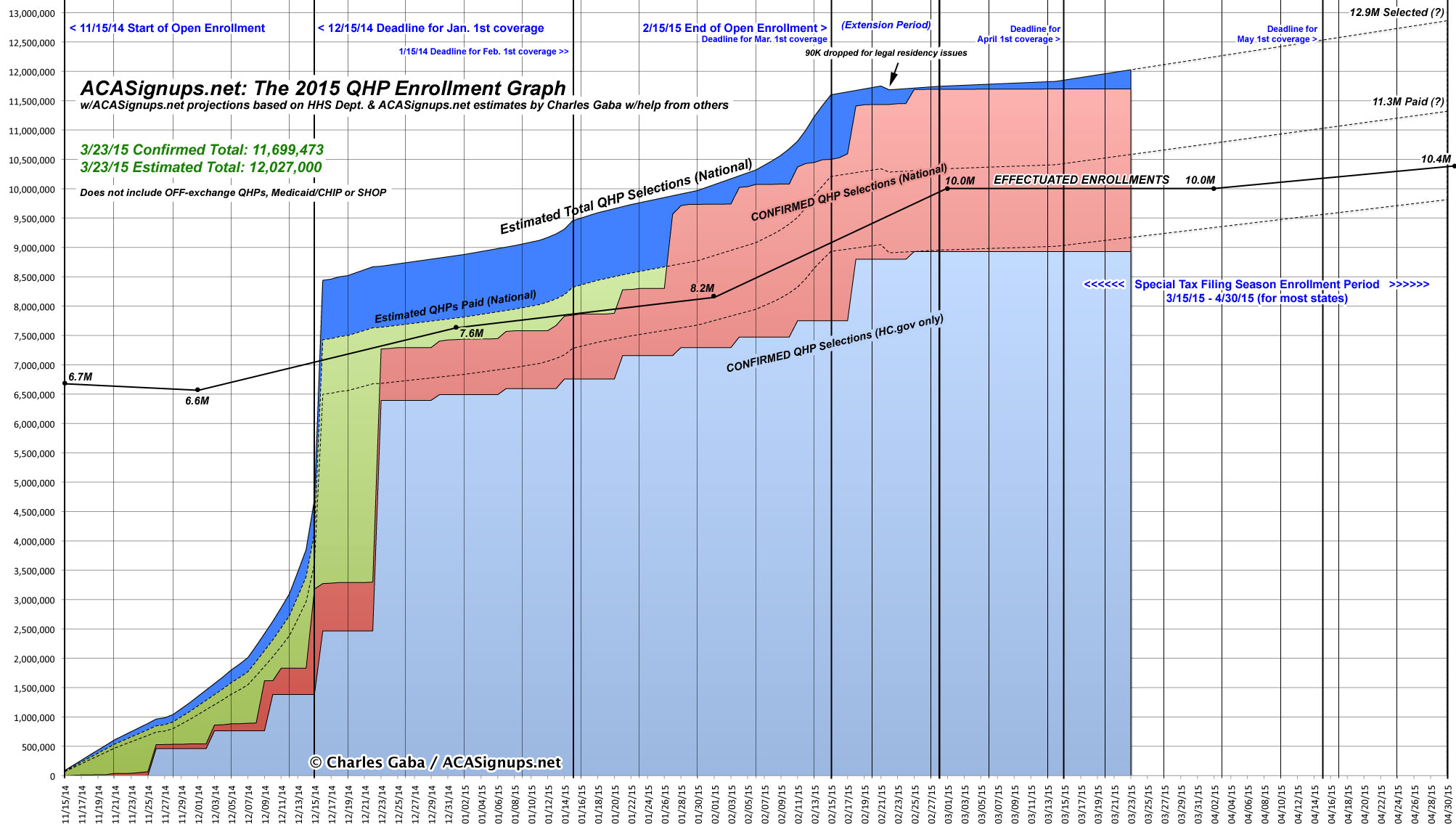 If my estimates are accurate, the total number of QHP selections for 2015 should cross over the 12.0 million even mark sometime over the weekend/early next week, just in time for the ACA's 5th anniversary. After that, I expect the tax season SEP to help bump the total up to around 12.9 million by the end of April (possibly 13M even?).

Of course, as always, it's important to remember that a good 12% of those enrollees likely won't actually pay their first premium, bringing the total number of paid enrollments down to around 10.5 million as of next week (11.3M by the end of April).

Finally, remember that just as people are still signing up and paying, current enrollees will also be dropping their policies due to various life changes (yes, even this early in the year...some people who were enrolled for January and February will drop their coverage in March, others in April and so on).

As a result of this, and based on last year's pattern, I expect that the number of people actually enrolled in effectuated policies as of next week will be right around 10.0 million even, before climbing up a bit to 10.4 million as of May 1st.

Don't forget that none of this includes the estimated 12.8 million people added/moved to Medicaid due to the ACA to date (including woodworkers & bulk transfers from other programs), or the estimated 330K SHOP enrollees, or the estimated 8 million or so who are now enrolled in ACA-compliant off-exchange policies.

And to clarify yet again: That does not mean I'm claiming that all 31.8 million or so of these folks are newly enrolled; only around 14 million of them are.

So, happy pre-anniversary to the Affordable Care Act. Whether you support or oppose it, you can't deny the impact that it's had and having on the healthcare landscape in America.