I contacted Mr. Megerian and asked him about this: 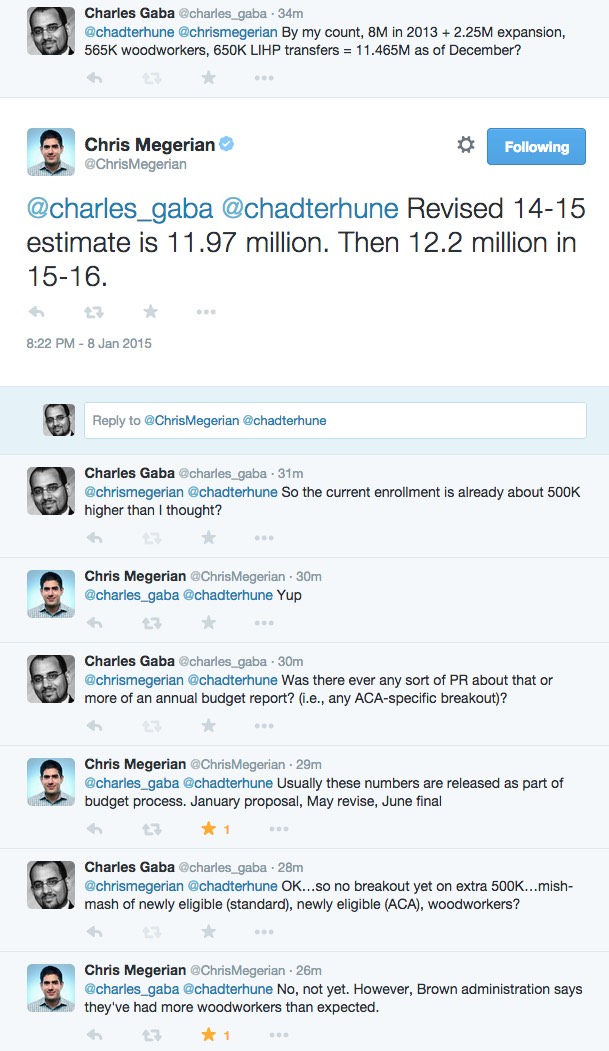 Huh. So, this means that CA's current Medicaid enrollment is a whopping 510,000 people higher than they had previously estimated, meaning they expect to add "only" another quarter-million or so this year.

There's no breakout of that 500K figure, of course. According to the Kaiser Family Foundation's estimates from last fall, CA started the year with roughly 2.98 million people eligible for Medi-Cal or CHIP (either via expansion or "woodworker" status), and the 2.81 million combined total that I have so far is only around 170,000 away from that cap (remember, the 650K transferred from LIHP don't "count" as "uninsured" at the time since they were in an existing program...although that program itself was also enabled by the ACA as well).

Of course, these are all rounded figures, and the KFF estimate was just that; the actual number eligible could be a couple hundred thousand higher or lower. However, assuming that they had it right, that suggests a breakout of something along the lines of:

That would effectively max out the ACA expansion/woodworker pool...except that Megerian says that they're still expecting another 230,000 to be added this year on top of all of that! Good heavens.

Anyway, unless/until someone has more solid numbers, I'm going to bump up my CA Medicaid estimates as follows:

There's also the matter of CA's formerly-massive Medi-Cal backlog, which had been whittled down to "under 100K" last I heard. I presume they've made further progress since then, but am not sure how to enter that so I'll leave it be for now.