Yes, I'm bumping up my January AND February enrollment estimates. HOWEVER...

This morning the HHS Dept. announced that QHP policy selections through 12/19 via the federal ACA exchange totalled 6.4 million people.

They also broke this number out (roughly) as being around 1.70 million manual renewals, 2.78 million automatic renewals and 1.92 million new additions.

I had estimated roughly 3.52 million not including autorenewals through the 12/15 deadline; the actual number looks like it was roughly 3.40 million (plus another 220K over the next few days). That means I was over by about 3.5% on that number.

Yet I underestimated by around 9% for the total. How could this be? Because I vastly underestimated the number of automatic renewals which would be put through.

I assumed around 6.1 million total renewals (manual + automatic). The total from HC.gov is around 4.48 million, leaving around 1.62 million renewals (again, manual plus automatic) from the other 14 state exchanges.

However, I've already confirmed 530,000 of these, and I'm reasonably certain that there will be around another 1 million from California, another 280K from New York and another couple hundred thousand from the other various state exchanges (some of which haven't even reached their deadlines yet).

Add those all up and that's more like 2 million renewals total from the state exchanges, for around 6.3 million total vs. my assumed 6.1 million (or HHS's 5.8 million).

In other words, the total number of January-start enrollees is very likely to be at least 200,000 more than I thought at a minimum. I'm increasing my 12/23 total (effectively "enrollments starting on January 1st") to 8.65 million (of which I expect around 7.6 million to actually pay their first premium).

I'm further raising my projection for February coverage (ie, the 1/15 total) up to 9.75 million.

HOWEVER, I'm not raising my grand total--running through February 15th--beyond the 12.5 million that I currently have...YET.

I'm tempted to, believe me. Every data release which has come in so far (with the exception of Oregon) has exceeded expectations. It's natural for me to assume this will continue. And I may very well bump the February projection up to 13 million or even higher.

However, there's still a LOT of unknowns and variables to sort out here. The ever-changing deadlines. The dust settling from the autorenewals. CA & NY still not releasing their autorenewal numbers. The 2 states which have deadlines today, and the 4 more which don't come up until the 31st. Massachusetts in particular is a huge wildcard; their total could be as low as 200K or as high as 300K.

In addition, it's still possible that a significant number of those extra 400K autorenewed enrollees may not be happy with their new rates. Most of them will likely switch to a different policy before 2/15...but some of them may go off-exchange or even drop their coverage completely. It's also possible that some of the enrollment data is double-counting "switchers" (people who were renewed but still have both the old and new policies on the books for the moment).

Am I lowballing here? Perhaps. Call it what you will. But until I have more clarity on some of these issues, I'm gonna stick with 12.5 million total, 11.0 million paying as of February 15, 2015.

With that in mind, here's the revised Graph: 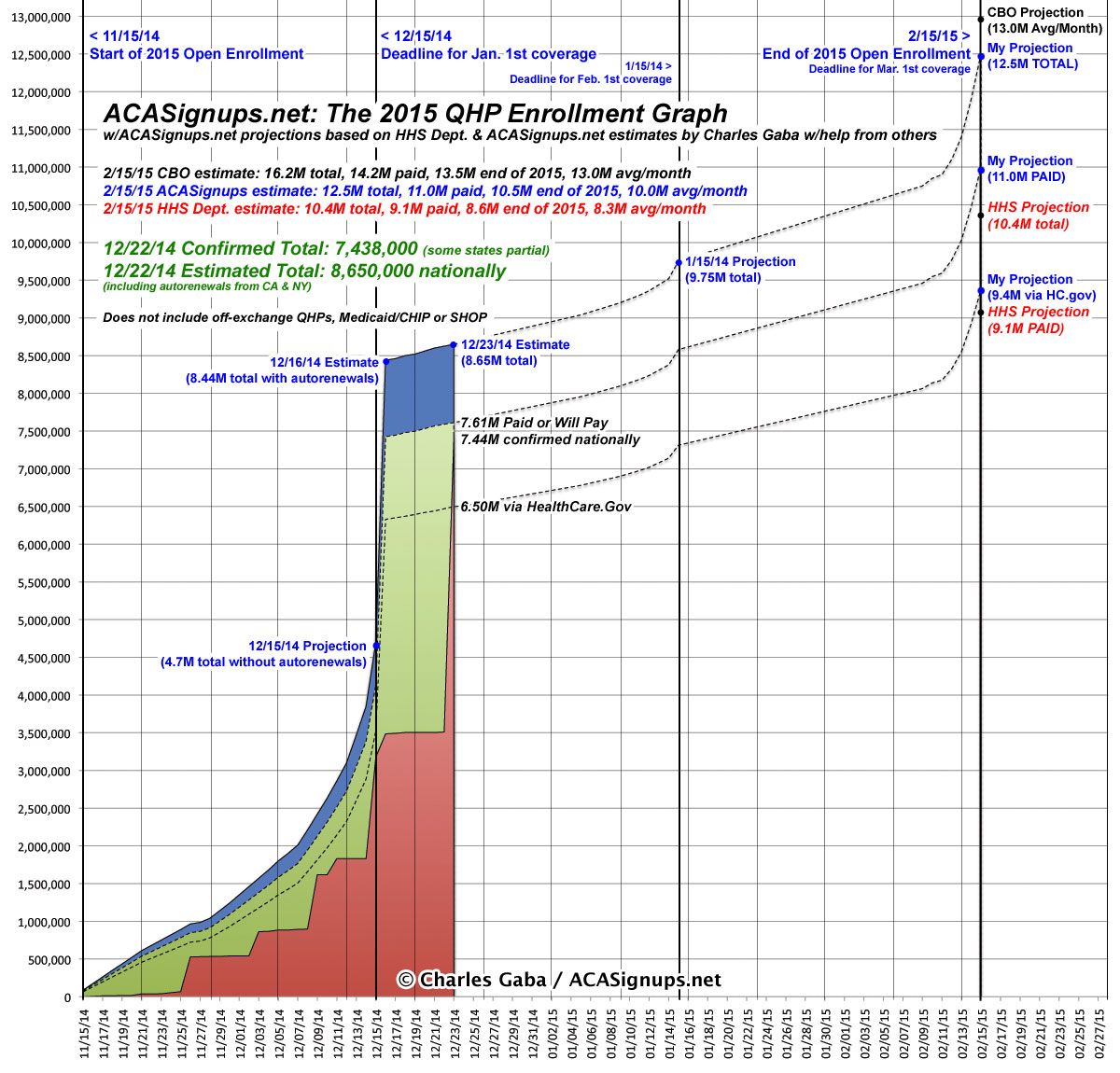