No formal press release yet, but CT is the 2nd state (after Kentucky) to announce how many 2014 enrollees were automatically renewed (as opposed to manually renewing):

66,000 of our customers were auto enrolled in our system and continue to have health coverage for 2015. #OEUpdate

The most recent update I have from Connecticut was 13,000 new enrollees, but that was only through last Friday, before the big weekend push. That means they added another 7K over the weekend; not bad!

Connecticut had roughly 76,000 current enrollees as of mid-September. I'll assume that this number dropped a bit further by mid-November, to perhaps 75K.

If 66K were autorenewed, that means that a maximum of 9,000 people have manually renewed, which is actually fewer than I had figured (I assumed manual renewals were running around 1:1 with new additions). At the very least, this means that a bare minimum of 88% of 2014 CT enrollees have renewed for 2015 (and that assumes that not a single one of them did so themselves).

OK, I've received confirmation from the Access Health CT that the 66K figure includes all renewals, whether manual or automatic.

To put this in context, when you add in the renewals CT has already reached 78% of their goal (roughly 110,000 QHP enrollments) already. 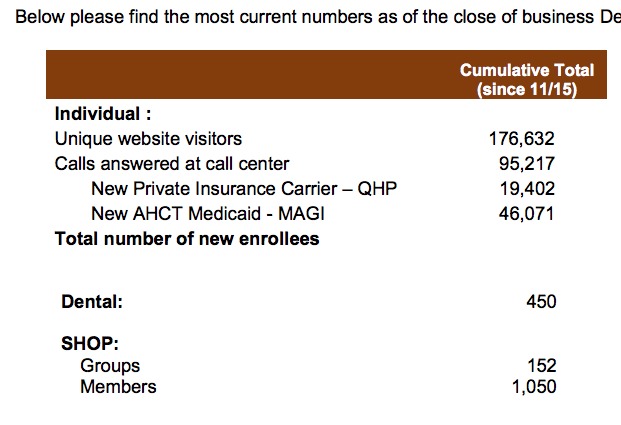