On the one hand, I'm a bit pouty today because I was off by about 6% on my HC.gov estimate through the 4th week. On the other hand, this is good news because it means that the actual enrollment total is 126K higher than I thought...and that's just via Healthcare.Gov! Of course, it's possible that the state exchanges will be a bit lower than I thought which might cancel this out, but assuming the 75/25 ratio is accurate, it should mean that instead of the 3.1 million national total I had estimated for 12/12, it should be closer to 3.3 million!

Anyway, here's the hard numbers from HC.gov through December 12th:

The other fascinating thing is that the ratio of new enrollees to renewals was still roughly 50/50 last week. I was pretty sure it would have shifted substantially towards renewals by now. It did start shifting that way, but only a tiny bit; from 52/48 to 53/47.

This is both good and bad news, depending on your POV. It's good because it means that there's a lot more new enrollees than I was expecting, which should help increase the total number of enrollees in February. It's "bad" because it also means that there may be a higher number of "autorenewals" than I had figured (I was assuming perhaps 3 million manual renewals and another 3.2 million autorenewals, with another 500K dropping their policy completely).

On the other hand, that's still 1.27 million current enrollees who should be all squared away, reducing the maximum number of autorenewals down to 5.4 million...and again, that's just on HC.gov. Many of the state exchanges are skewed even more heavily towards manual renewals so far (Washington State and Vermont are 4:1 renewals to new). I've documented at least 332K renewals from the state exchanges, so that's a bare minimum of 1.6 million who've renewed manually so far...and that was only through Friday. 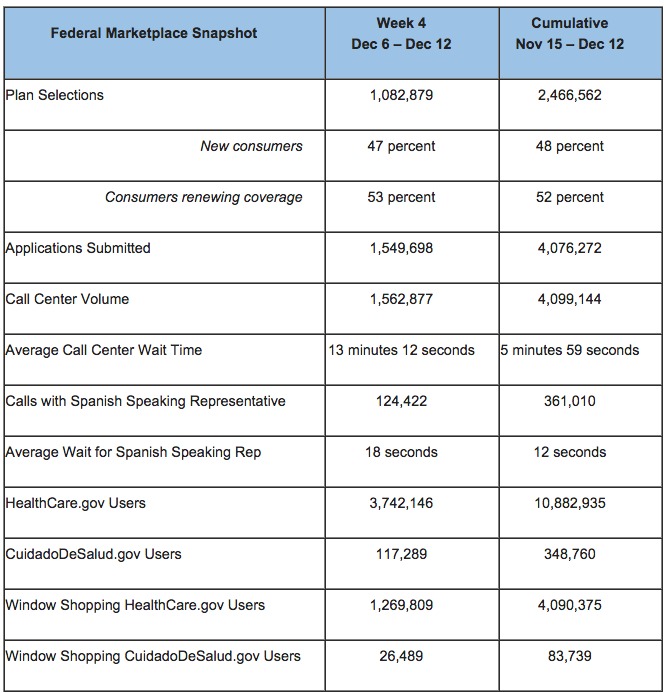 So, what does this mean for my estimates through yesterday?

Well, assuming I underestimated by the same 6% over the weekend as I did for the 4th week, that suggests that the total through midnight last night should be roughly 3.58M via HC.gov and 4.77M nationally, or around 270K higher than I've been thinking.

According to the conference call, there were a whopping 500,000 people who had to leave their contact info for callbacks via the HC.gov call centers yesetrday because they had some sort of issue they needed to discuss. Supposedly every one of these people qualifies for January 1st coverage if/when they're called back and are able to resolve their situations.

Now, on the one hand, not every one of those 500K will be able to be contacted or resolve their policy situation. Furthermore, not all of them are going to be renewals of current enrollees; I assume a good chunk will be new to the process, trying to answer questions.

However, it's also true that 500K callbacks doesn't mean 500K people...presumably those are households, most of which presumably have more than one person living there. So I think it's safe to say that all told, those 500K callbacks should represent at least 800K actual people who should theoretically be able to get coverage in time for January 1st.

How will that play into the mix? I have no idea yet, so for the moment, I'm going to keep my 7.7 million estimate through 12/23 where it is.