A nice update out of California...but still a frustrating one. They held an executive board meeting today at which they posted an updated QHP selection total for 2015: 91,693 as of 12/11/14. Unfortunately, this still doesn't include any renewal data for existing enrollees.

As I noted last week, however, I'm extremely confident that CA's renewals/re-enrollments are running easily at the same rate (or potentially as high as 4x as many) as new additions, so I'm very comfortable doubling this number to at least 184,000 total QHP selections as of the 11th. 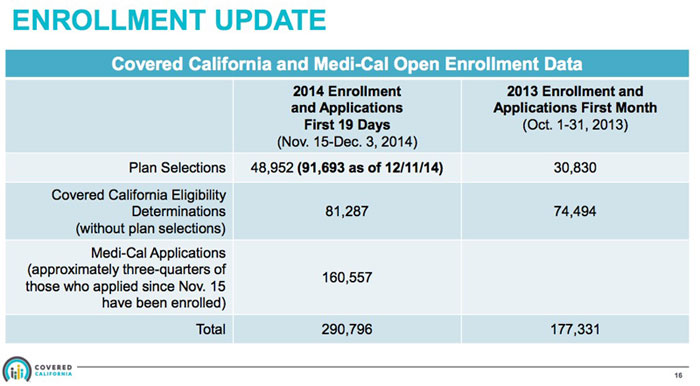 Since HC.gov (37 states) was running at a 52:48 ratio for renewals vs. new additions for the first 3 weeks, and individual states such as Vermont and Washington State have been running at as high as a 4:1 ratio, I'm fairly certain that CA is running at 2:1 or 3:1, but until hard numbers are released I'll keep it at 1:1 for the moment.

Even so, the trend is still clear from the 3 data points which have been released for new enrollments only:

That's more than a 2.1x rate increase over the past week.