Massachusetts may hit their 2014 QHP total by tomorrow; plus, Medicaid hits 50K

The Daily Caller might be interested in the fact that while yes, the 2nd week numbers did drop substantially in both Massachusetts as well as HC.gov, as I expected, they've bounced right back up again in the third week (in MA, at least). In fact, if you look carefully you'll note that determinations are increasing a bit each day so far: 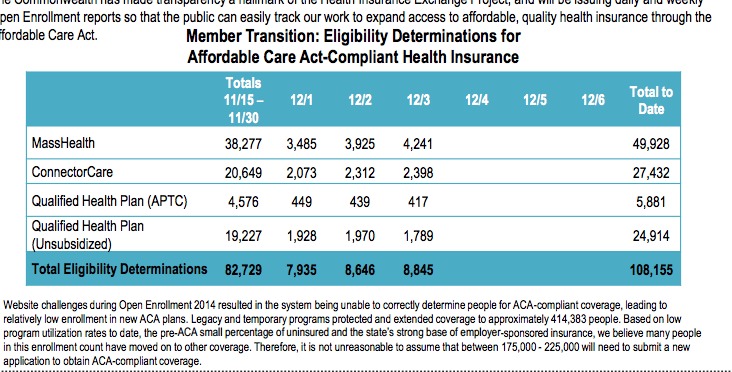 That's right: It's conceivable that MA could hit their 2014 total (31,695 as of April 19th) by the end of business tomorrow. Assuming the "selected plans" percentage has gone higher than 48.5% this week, it's even conceivable that they'll hit it today.

Meanwhile, Medicaid enrollments are about to break the 50,000 mark as well.

UPDATE 7:38pm: OK, I didn't even see this until just now: The MA Health Connector has also issued a press release to accompany today's report, noting that total determinations (including MassHealth) have passed by the 100,000 milestone. The PR also includes another handy data point:

Of the 58,227 who qualify for Health Connector insurance, 29,439 have already shopped and selected their health plans while 2,043 have paid their first bill, less than three weeks in advance of the Dec. 23 deadline to take action for Jan. 1, 2015 coverage.

This ratio will likely continue to slowly inch up from there over the next week or so, followed by a sudden spike upwards as all of the people who did the prep work over the past couple of weeks go back in and actually enroll.

Meanwhile, the payment rate in MA now stands at about 7%, which I'm sure will put the GOP House Energy & Commerce Committee into a feeding frenzy :)