A couple of weeks ago, I posted an entry regarding the proposed rate change requests by the 17 insurance companies participating on Michigan's ACA exchange for 2015. The news at the time was a mixed bag, with some companies requesting rate increases of up to 18%, while others were requesting a reduction of their rates by 22%. Overall, according to the Detroit Free Press article, the average rate increase request is a mere 0.8%. Hooray! 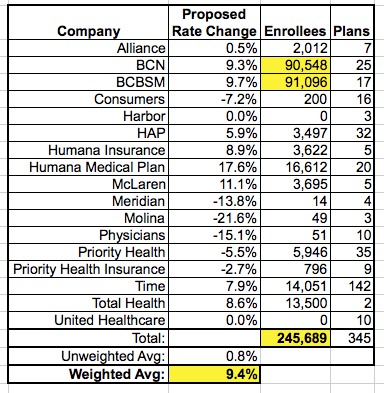 However, when I looked more closely at the chart, I realized that this was an unweighted average. That is, they just took the rate change requests for all 17 companies and divided them up to get the "average" request. The problem with this is obvious when you look at the actual enrollment breakdown by company: Two providers (Blue Cross Blue Shield of Michigan and Blue Care Network) make up a whopping 74% of the total enrollments!

Furthermore, these two companies are asking for increases of 9.3% and 9.7% respectively. Obviously, assuming the rate increases are approved, the 9.3-9.7% increase from those two is going to impact a hell of a lot more people than, say, the 22% decrease requested by Molina...which only has 49 people enrolled.

So, I've taken the liberty of running a weighted average across all 17 companies (2 of which weren't even on the exchange last year), and sure enough, it comes up at a 9.4% increase. While this isn't bad at all (it's actually slightly below the 11% per year increase that was the norm prior to the exchange launch), it's quite a bit higher than the 0.8% "average" that the Free Press claimed.

I'm not thrilled about bringing this to light, but if I'm going to tout the good news I also have to be honest about the not-so-good news as well.

Of course, there's another factor to consider as well: Even when properly weighted, we have no idea what these increase or decrease requests are from. That is, let's say that BCBSM's average premium was $500/month while Molina's was $1,000/month to start with. BCBSM raising their rates by 9.7% (up to $548.50) would still come in less expensive than Molina reducing their rate by 21.6% (down to $784), so this still doesn't tell us everything.

In addition, of course, these are just preliminary requests; they could change dramatically (in either a good or bad way) by the time the 2nd enrollment period actually starts.

HOWEVER, there's also one other thing which I noticed. Take a look at the total enrollment figure towards the bottom of the chart. Notice that it's 245,689 people, right?

By an amazing coincidence, this happens to be exactly the same paid percentage figure that I've been estimating for months now!

With the addition of Michigan, I now have verified 1st month payment data from 16 different states, representing 2.75 million enrollments out of the original 8.02 million, or about 34% of the total. The overall weighted average of these 16 states comes to a payment rate of 90.4%.

Now, on the one hand, it's entirely possible that the payment rate in, say, Texas and Florida is lower than 90%. On the other hand, California's 85% official rate hasn't been updated since April 27th; it's almost certainly gone up a few points since then. Thus, my 90% overall estimate stands.