Dear Sharyl Attkisson: Stop it, you're just embarrassing yourself now.

(sigh) OK, I saw a reference to this piece of fiction from The Daily Signal (a front for the right-wing Heritage Foundation...you know, the same guys who pretty much created the Affordable Care Act in the first place, but later changed their tune when their own plan was implemented by a Black Democrat) earlier today, but wasn't planning on responding to it since a) I already have addressed pretty much every one of their BS claims as recently as yesterday and b) if I spent the time it took to rebut every piece of feces that comes across my line of sight, I'd likely have a shingles relapse as a result.

However, it looks like this particular piece of poo is sticking to more than a few shoes today, so I'm once again going to resist rolling my eyeballs long enough to take a look at what shade of crayon one Sharyl Attkisson used to write it.

“Is the new law effective in reducing the number of uninsured? Yes, but so far not very,” he says.

Ah, the famous Mr. "A Source" who "supports and helped implement Obamacare". No name, company, organization or department, no description of their area of expertise; simply "a source". My 8-year old son could be "a source". The only description is that they "helped implement Obamacare", which could mean anyone from Kathleen Sebelius down to one of the navigator assistants at Cover America. Heck, anyone who enrolled themselves in a QHP or Medicaid via one of the ACA exchanges "helped implement" the law.

The administration hasn’t released any enrollment figures in the last 2 ½ months, and a spokesman from the government’s Centers for Medicare and Medicaid Services, which helps oversee Obamacare, said the agency is not likely to issue any updates soon.

...A spokesman for CMS said there were no plans to release figures on paid enrollment, even though health policy analyst Robert Laszewski says the administration could provide the number in days or even hours if it wanted to.

OK, score one point for Ms. Attkisson. I agree with her and all those opposed to the ACA that the HHS Dept. should not have stopped issuing the monthly enrollment reports, said so at the time and still say so now. This piece of tripe from the Daily Signal is one of the reasons why: In the absence of official data, your opponents are free to fling as much poo as they wish (granted, they'll fling it anyway).

But the 8 million figure is overstated because it counted people who weren’t actually covered because they hadn’t paid their premiums, which Blue Cross, analysts and the government agree is in the 15 percent to 20 percent range.

Therefore, the actual number of Obamacare enrollees as of March 31 was likely between 6.4 million and 6.8 million, below both the administration’s figure of 8 million and its stated target of 7 million.

OK, now we get into the thick of it: Actually, the current total is closer to 8.5 million exchange QHPs. As I've demonstrated, based on the post-April data from the 6 states providing this info released so far, it looks like the overall "off season" QHP enrollment will be between 20-25% of the "on season" rate, or around 8,000 - 10,000 per day. In the interest of caution, I've dropped my own estimate down even further to a mere 7,000 per day, which would still bring the current total up to at least 8.47 million as of today.

Now, Ms. Attkisson is correct that not all of these folks have paid. As I've shown many, many times, the actual payment rate is much higher than 80-85%; it's actually almost certainly 90%, and likely higher, although again, in the interest of caution I've backed off of my earlier 93% paid-or-will-pay-soon estimate.

In other words, we're talking about at least 7.2 million (if you're only including the "official" 8.02M from the last HHS report, which ran through 4/19) or up to 7.6M (if you include the enrollments to date, the payments for some of which won't be in for another couple of weeks). This is well above the 7 million "goal" and way above the CBO's revised 6 million "goal" from back in February.

Estimates of how many marketplace enrollees were previously uninsured range from about one-third to more than half, depending on the survey and the methods used.

A recent Kaiser Family Foundation survey found that 43 percent of those who purchased insurance through the marketplace already had insurance; 57 percent are newly insured.

“The enrollment figures for marketplace coverage will grow over time, assuming that the exchange insurance plans don’t fail as a result of adverse selection,” said the source who supports and helped implement Obamacare. “But the impact on reducing the uninsured so far is very disappointing.”

Hmmm...actually, the Obama administration never specifically stated what they "hoped for" in terms of the net reduction in uninsured in the first year of exchange implementation...which includes Medicaid expansion. The closest thing I can think of to this was the CBO report (the same one which issued the "7M" QHP figure), in which they estimated that the net reduction in uninsured by the end of 2014 would be around 14 million: 7M exchange QHPs + 9M Medicaid, minus about 2 million people due to churn and so forth. In other words: a) The year isn't over yet and b) we haven't even touched on Medicaid yet, it's laughable to state--at this point--that the Kaiser numbers are "not what the Obama administration hoped for".

Another number falls short as well. The source who supports and helped implement Obamacare said about 38 million uninsured are eligible for Obamacare and “all of them should be interested in obtaining it.”

Assuming the most positive estimates—that 85 percent of the 8 million enrollees have paid their premiums and 43 percent had coverage before—the newly insured would number only about 3.9 million. By this time, CBO had projected 19 million would have been removed from the ranks of the uninsured, and CMS predicted 26 million.

At this point Ms. Attkissen is just babbling incoherently. The previous number hasn't "fallen short". The mysterious "source" she references isn't too far off on the total eligible (KFF.org has it at around 36.4 million*, not 38 million, when you subtract out undocumented immigrants and the 4.8 million people who got screwed over by the states which refused to implement Medicaid expansion, but whatever), but Ms. Attkisson deliberately ignores the nearly 8 million OFF-EXCHANGE QHP ENROLLMENTS enrolled in since January 1st.

*UPDATE 6/15/15: At the time, KFF had the eligible population at 36.4M; since then they've revised their estimates due to population shifts over the past year; plus, several additional states have expanded Medicaid since then, thus increasing the potential pool further.

(As an aside, I'm beginning to wonder whether her source's name actually is "TheSourceWhoSupportsAndHelpedImplementObamacare". Anyone want to run a background check on that name?)

Now, most of these folks were not newly insured, as I noted yesterday; a reasonable estimate is that only around 1.5 million of them were, and again, about 10% of those folks probably haven't/won't pay up, dropping it further to about 1.35 million. However, 1.35 million is still significantly greater than, say, zero.

I'm not sure where the hell Ms. Attkissen got her "19 million" or "26 million" reduction in uninsured figures from (at least in the first year; long-term is a different matter); she doesn't link to those sources (though she has no problem linking to many others). I'll assume, however, that these were earlier estimates by the CBO which preceded, say, the SCOTUS decision which allowed half the states to blow off Medicaid expansion. The CBO was also projecting a massive budget surplus at the tail end of President Clinton's term in office, after all; that projection was assuming that we wouldn't spend $2-4 trillion on an unnecessary war during which we'd slash taxes for no particular reason. I mean, I can project lots of things that don't entail my being hit by a bus beforehand. So, sure, whatever: Perhaps the CBO did issue some early report projecting a 19M reduction based on the situation at the time, which has nothing to do with anything.

And now we come to possibly the most idiotic, insultingly stupid part of Ms. Attkisson's piece: This ridiculous "Graph": 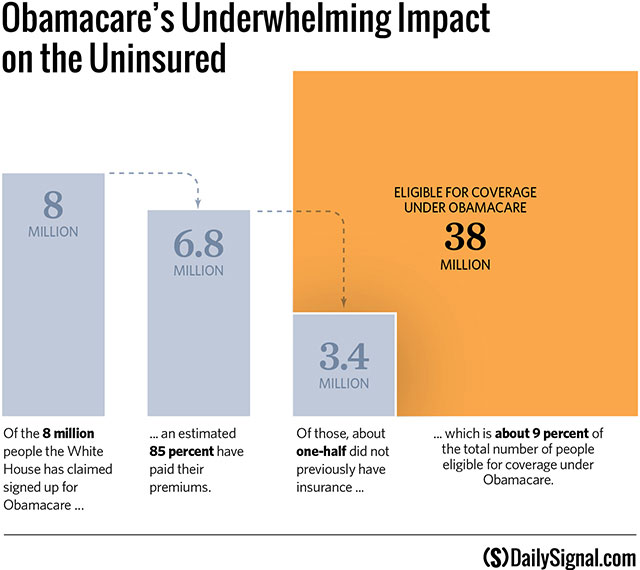 This is such an absurd waste of pixels, I couldn't bring myself to bother with the rest of her piece. I have, however, corrected it for her; please feel free to repost/retweet the accurate version (the original was obviously custom-designed specifically for posting to right-wing twitter/tumblr feeds and the like). It's not the prettiest thing in the world, but it's a hell of a lot more accurate: 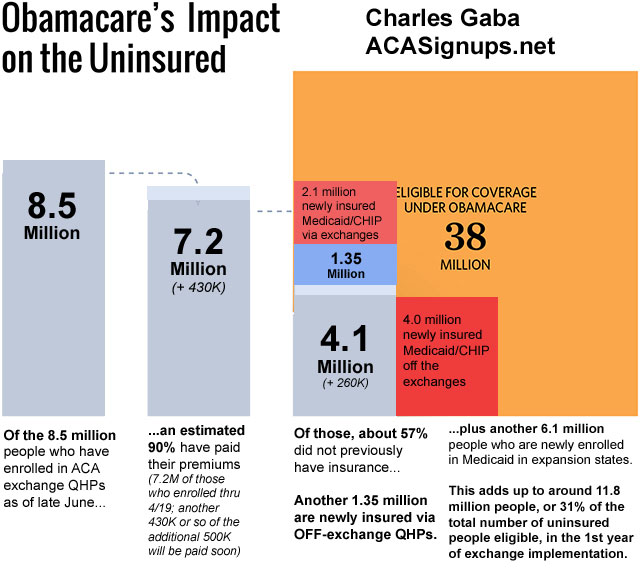 UPDATE 6/15/15: As noted above, these numbers did turn out to be slightly overestimated; the actual uninsured reduction as of June 2014 was more like 10.5 - 11.0 million, although as of a year later (June 2015) it's down considerably more, on the order of 14-15 million (the Administration claims over 16 million since the ACA was actually signed into law, but I'm measuring from the 3rd Quarter of 2013, just prior to the exchanges and Medicaid expansion).

I should also note that an extensive survey by the Commonwealth Fund released just a few days ago confirms that about 5.7 million of those enrolled in ACA exchange policies this year (2015) are newly insured...which, again, doesn't include Medicaid, CHIP, or off-exchange enrollees.