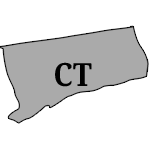 Hmmm...starting to notice a trend here, at least among the state-run exchanges...so far, New York, Colorado and now Connecticut are slowing down a bit in the 3rd week. This suggests one of two things: Either the state-run exchanges have done such a great job until now that they're running out of people to enroll (case in point: I wouldn't be surprised if Vermont actually drops off the map fairly soon, as there may simply not be anyone left for them to enroll), or the earlier March "semi-spike" was due to people wanting to beat the "soft deadline" of March 15, in which case there should still be a last-minute spike even in CT/NY/CO/etc. this weekend after all.

What am I talking about? Well, two things: First, you had to enroll by 3/15 in order to have your policy start coverage as of April 1st; anyone enrolling now won't have their policy start until May 1st.

However, there's another reason, which I only found out about myself recently: It turns out that while 3/31 is the official deadline to enroll without having to pay the 1%/$95 penalty, 3/15 was actually the "soft deadline" to avoid having to fill out a special hardship exemption on their taxes next year to avoid that penalty.

You see, technically speaking, the fact that 3/31 is the last day of open enrollment is not the point that the penalty kicks in...it's just that the penalty kicks in if you go more than 3 months in a row without being insured. Since that 3 month clock starts ticking on January 1st, you have to have an active policy by April 1st to avoid having to pay the fee. As explained by eHealthInsurance, who obviously has an interest in encouraging enrollments for their own reasons...

February 16, 2014:
· Enrolling on this date or later means that a consumer’s coverage will not likely come into effect earlier than April 1, 2014, which is outside of the open enrollment period. This might have made the enrollee subject to a tax penalty if he or she had been uninsured since January 1 (that is, for three consecutive months). However, the federal government has said that consumers who enroll during open enrollment (that is, by March 31, 2014) will not need to pay a tax penalty. In order to avoid paying the tax penalty, these consumers should know that they may be required to claim a special hardship exemption when filing their 2014 federal tax returns 3.

March 15, 2014:
· This is the last date on which consumers may enroll in health insurance plans for coverage to begin on April 1, 2014. Consumers enrolling at this time may be required to claim a hardship exemption on their 2014 federal tax return in order to avoid a tax penalty.

March 16, 2014:
· Consumers who enroll in health plans between March 16 and March 31, 2014 (the end of open enrollment) may not be able to obtain coverage starting earlier than May 1, 2014. Again, consumers enrolling in this period may be required to claim a hardship exemption on their 2014 federal tax return in order to avoid a tax penalty.