Mississippi (yes, Mississippi) up to 28,500 QHPs, slightly ahead of Feb. avg. 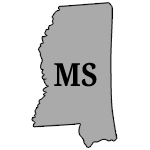 That changes things. Instead of being down 28%, Mississippi is actually up slightly over February (very slightly...298/day vs. 293). Still great news!

The Mississippi Enrollment number was reported to us Monday during a regular call with state orgs, providers, HHS, and Enroll America.

The HHS regional office out of Atlanta provided the number and the actual figure was 28,531. We were told that number was as of Tuesday, March 11.