Georgia's health department doesn't publish their annual rate filings publicly, but they don't hide them either; I was able to acquire pretty much everything via a simple FOIA request which was responded to within an hour of my asking.

INDIVIDUAL: A few years ago, Georgia's GOP Governor, Brian Kemp, put in a request to the Centers for Medicare & Medicaid Services (CMS) for what's known as a Section 1332 State Innovation Waiver. If approved, these waivers allow individual states to modify how the ACA operates in their state as long as they can prove that the changes would a) cover at least as many residents b) at least as comprehensively without c) increasing federal spending in the process.

1332 waivers have been used by over a dozen other states, mostly to set up "reinsurance" programs, which reduce the unsubsidized premiums for ACA marketplace policies (but which can, ironically, end up increasing the net cost of ACA policies for subsidized enrollees, depending on how they're funded and structured). However, they can be used in other ways as well. Reinsurance programs can be useful in a world where the ACA's subsidy cliff exists, but won't serve much function if, as I hope, the American Rescue Plan's expanded ACA subsidies are permanently extended.

Georgia's 1332 waiver proposal consisted of two parts. The first was more or less a standard reinsurance program not too different from other states utilizing such a program. This part of the waiver proposal was given the green light and went into effect this year.

In any event, the first noteworthy development is that thanks in part to the new reinsurance program, Georgia's insurance carriers are "only" requesting average 12.7% rate increases next year. That's ugly enough, but without it I presume the hikes would be considerably higher yet.

NOTE: Ambetter, which holds nearly 50% of GA's individual market, seems to have a data entry error...their URRT form says they're seeking avg. rate hikes of 11.7%, but their "LHT-1" form claims they're reducing avg. rates by 1.9%. This is kind of an important discrepancy, but until I hear otherwise, I'm assuming the worst-case scenario is the accurate one...

Also note: The second part of the "Georgia Access Model," as it's officially called, was garbage and I'm happy to see that the Biden Administration has kicked it to the curb.

For 2023, I've confirmed that while the individual market carriers are staying the same, at least two, and possibly as many as eight carriers are dropping out of the state's small group market...including the one (Friday) which just jumped in this year.

I've been informed that Georgia's small group market has been significantly shrunk of late by two things:

Level-funded insurance refers to a health insurance plan in which an employer pays a set premium amount each month to an insurance carrier or Third-Party Administrator (TPA). The insurance company or TPA puts these funds into an account to cover claims, stop-loss coverage premiums, and administrative expenses.

Your monthly premium in a level-funded plan is based on an estimated maximum cost or worst-case claims projection. This projection includes the cost of a stop-loss policy, which limits the financial risk for catastrophic claims. The benefit of this type of health insurance is that if your claims are lower than expected, there is the possibility of receiving a refund at the end of the plan year.

An individual coverage health reimbursement arrangement (ICHRA) is a new type of health reimbursement arrangement in which employers of any size can reimburse employees for some or all of the premiums that the employees pay for health insurance that they purchase on their own. ICHRAs were created under regulations issued by the Trump administration in 2019, and became available as of 2020.

ICHRAs represent a departure from previous ACA implementation rules that forbid employers from reimbursing employees for individual market premiums. QSEHRAs, which became available in 2017, allow small employers to reimburse employees for individual market premiums. But ICHRAs allow this for employers of any size, and they offer more flexibility in terms of how much an employer is allowed to reimburse an employee.

I don't know nearly enough about "level-funded" plans to comment, but ICHRAs essentially boil down to employers shifting their employees over to individual market policies...and while the enrollees don't qualify for any official ACA premium subsidies, both the employer and employee still benefit from the employer-sponsored insurance tax benefits, which means the employer still covers the bulk fo the cost of the plans.

I've been informed that Alliant, Friday and possibly Humana (both listings below) are giving up on Georgia's small group market accordingly. I don't know the status of the other blank lines (Cigna, Kaiser Permanente, UnitedHealthcare Insurance Co. and UnitedHealthcare of the River Valley), but I do know that none of the eight missing carriers were included in the zip file I received from the Georgia state government FOIA request, so until I learn otherwise, I'm assuming that all eight of them are bailing. 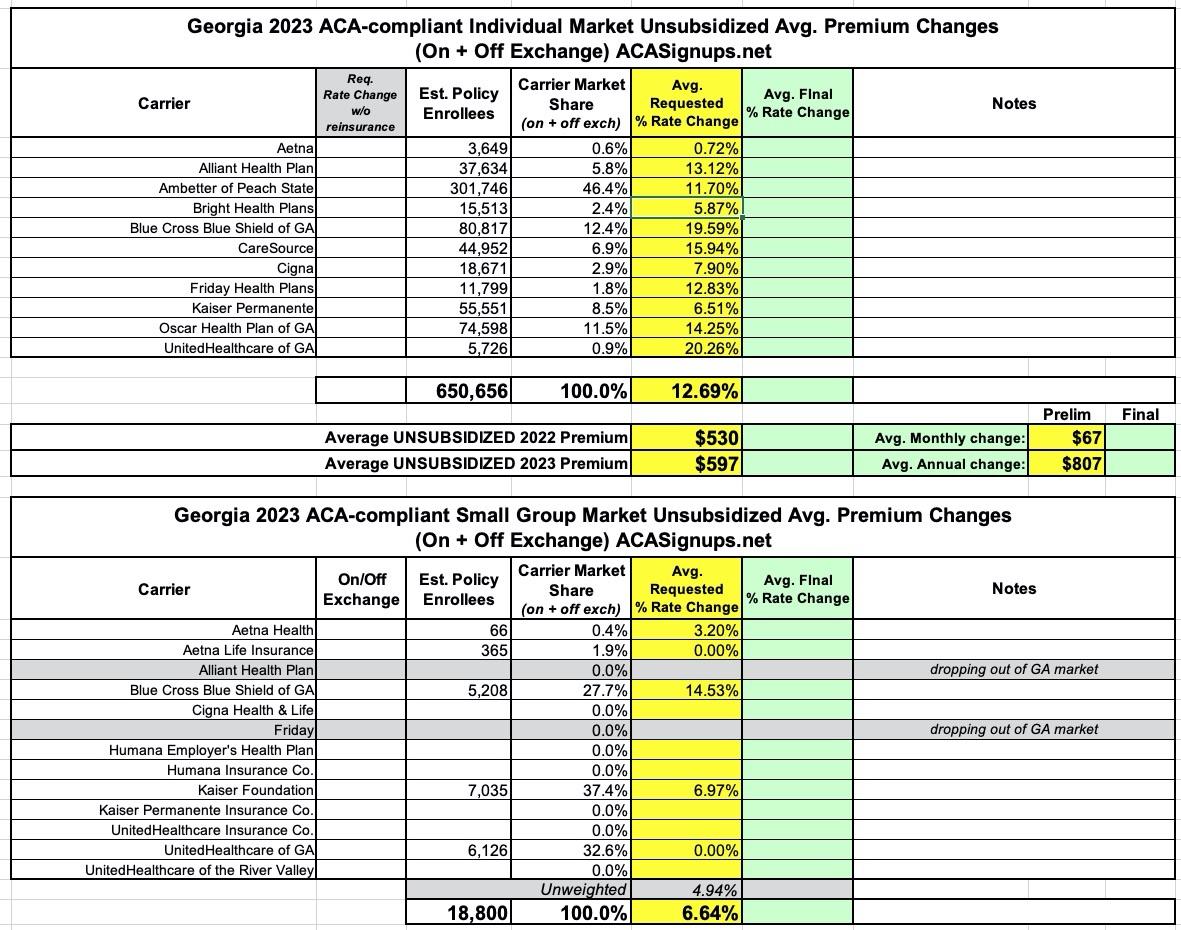 UPDATE 7/28/22: Several of the Georgia individual market carriers have posted updated 2023 filings, including some changes to their average premium hike requests. In most cases these are somewhat lower than the original requests (especially Cigna), but one is higher. Overall it reduces the statewide preliminary average to +11.8% instead of +12.7%: