"In other news, water is wet"...but seriously: 99.2% of recent #COVID19 deaths are among the unvaccinated

This would seem to be an obvious headline, but it's still important to have the official data. Via Rolling Stone:

This week CDC Director Dr. Rochelle Walensky said adult deaths from Covid-19 are “at this point entirely preventable” due to the effectiveness of vaccines. And a new analysis from the AP confirms what Walensky said.

According to the analysis of government data from May, released on Thursday, out of the 18,000 Covid-19 deaths during the month, approximately 150 were fully vaccinated people. That comes out to 0.8 percent, or an average of five deaths per day out of more than 200 average daily deaths. At the height of the pandemic in January of this year, average daily deaths were above 3,400 per day. Additionally, fully vaccinated people accounted for fewer than 1,200 of more than 853,000 hospitalized with the virus (0.1 percent).

Let me repeat that: 99.2% of those in the U.S. who died from COVID-19 in the month of May were unvaccinated (or only had their first of two doses, in the case of those receiving Pfizer or Moderna), and 99.9% of Americans who were hospitalized due to COVID-19 were unvaccinated/only partly vaccinated.

It's been a few weeks, so let's check and see how the vaxxing of America is going again, shall we? 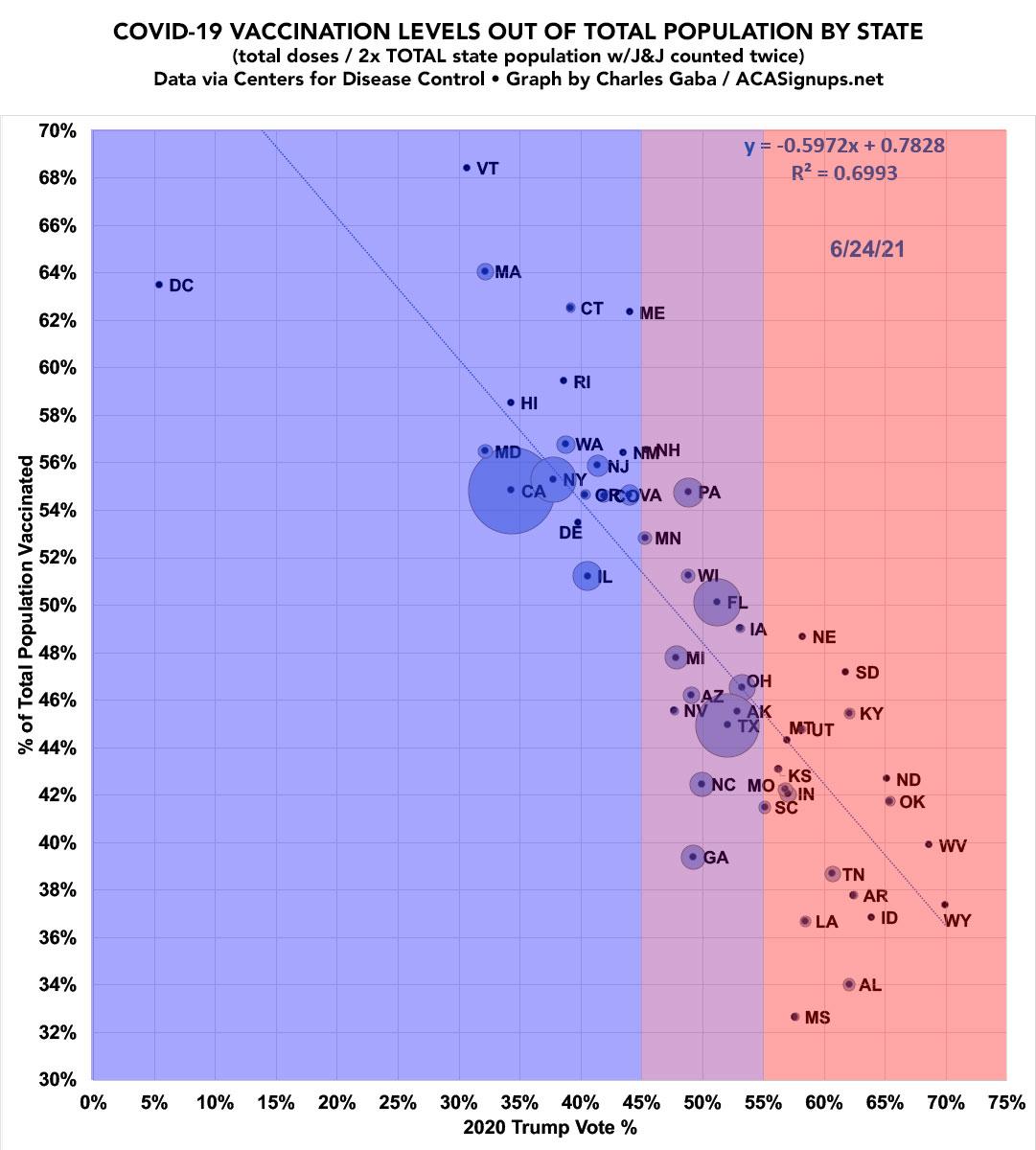 Remember, the graph above is based on the entire population of each state, not just adults 18 and older. According to the CDC's COVID-10 Vaccination Dashboard, there's roughly 258.4 million adults 18 and older in the U.S. out of around 332.1 million total. That means President Biden's 4th of July target to get 70% of U.S. adults vaccinated (and even then he's just calling for them to at least get their first shot) only amounts to roughly 180.1 million adults, or 54.5% of the total population.

In order to achieve 70% of the entire population getting vaccinated (which is where the graph above cuts off), we'll need a total of 232.5 million Americans of whatever age vaxxed, or the equivalent of 465 million doses administered (with J&J counting twice). As of yesterday, we were at 331.1 million does-equivalents, meaning we need another 133.9 million doses administered to hit 70% of the full U.S. population.

Even then, one of the leading public health experts, Proferssor Peter Hotez MD PhD of Baylor University, says that we need to reach somewhere between 80 - 85% of the total population to be fully vaccinated in order to achieve herd immunity. Even Vermont, which has been kicking ass on the vaccination front, still isn't close to that. 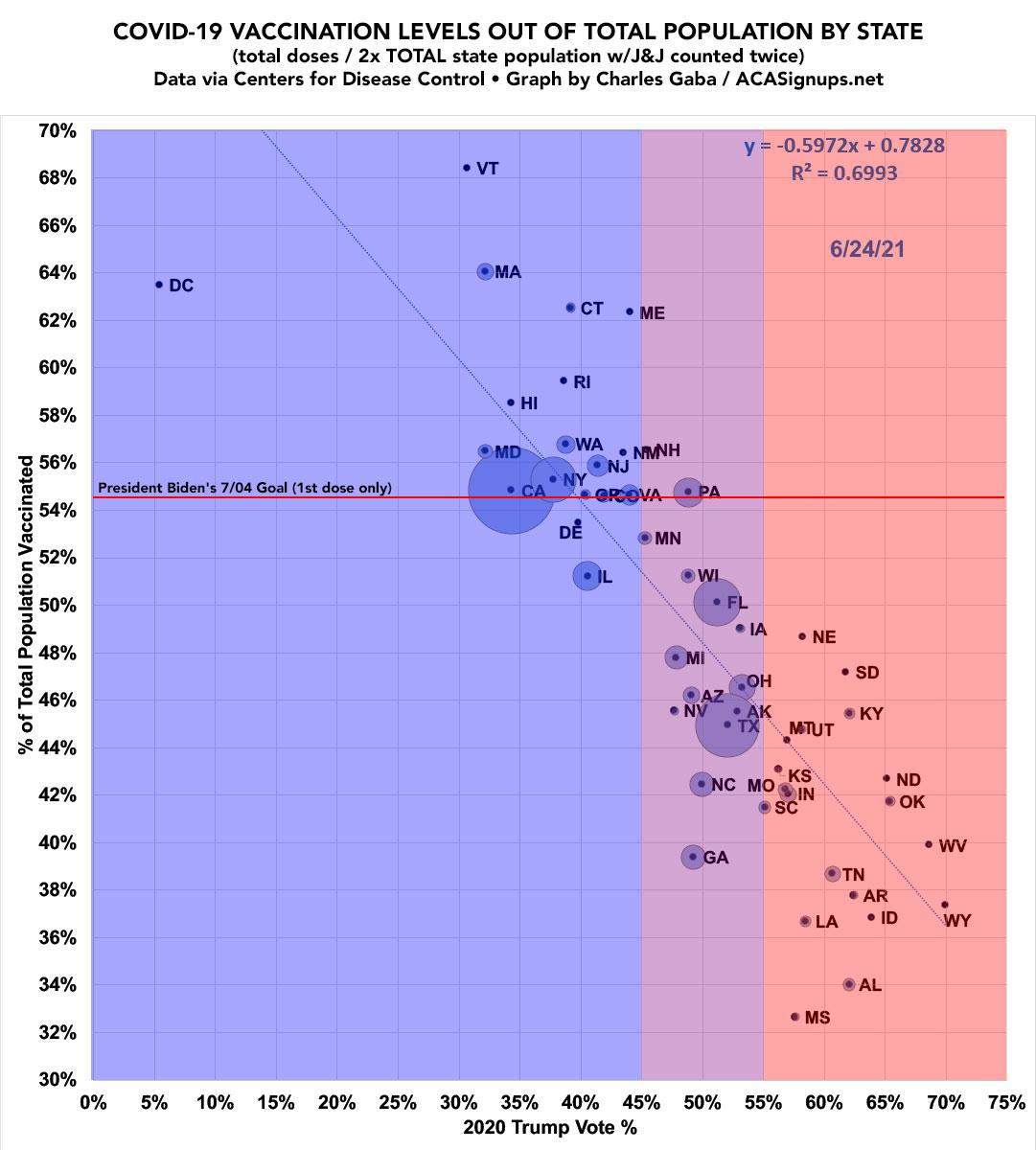 Update 6/26/21: Here's the state-by-state breakout. Note that the U.S. as a whole is on the verge of having exactly 50% of the population fully vaccinated: 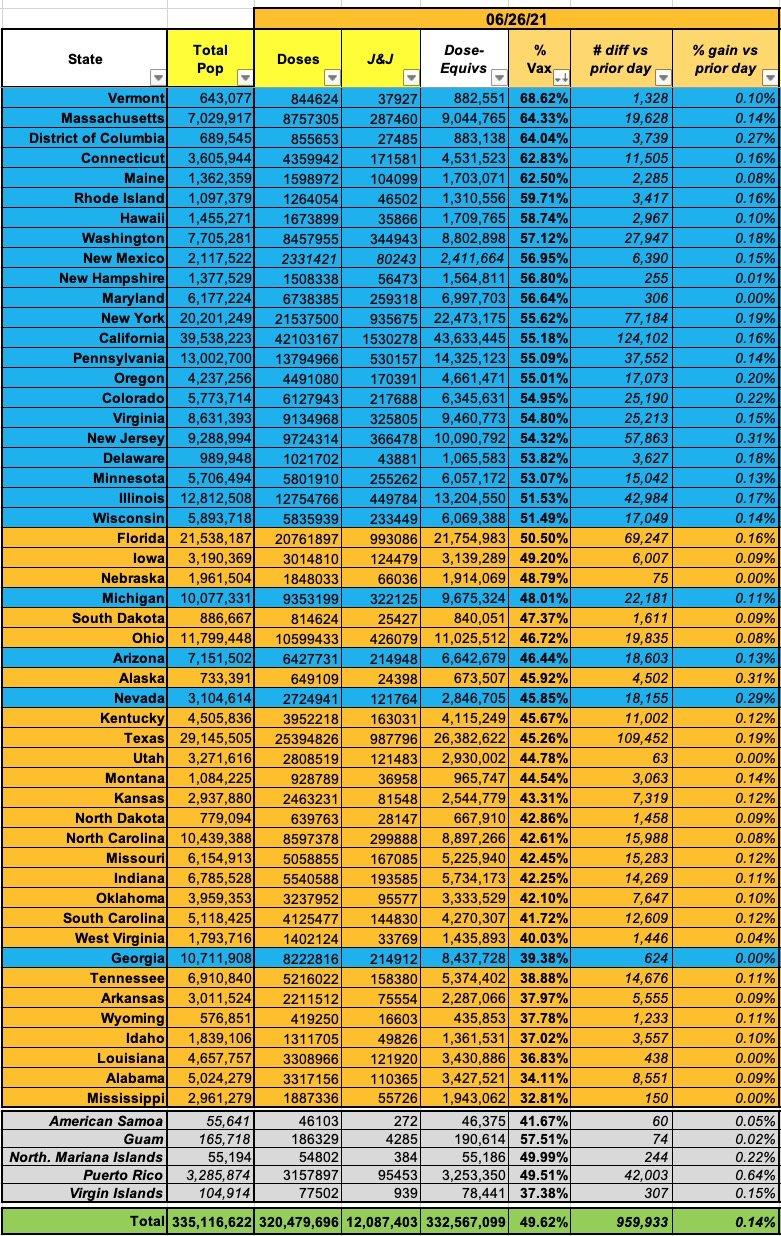