Andrew and I both took a crack at estimating the 100-138% bracket, and came up with several different numbers; I figured around 1.9 million, while Sprung initially agreed with my 1.9 million figure but later revised his estimate to just 1.6 million. Meanwhile, Richard Mayhew at Balloon Juice chimed in to say he thought it was higher than 1.9 million.

Of course, a few things have happened since last summer. For one thing, both Alaska and Louisiana have expanded Medicaid via the ACA, dropping the number of non-expansion states from 21 to 19. For another, those estimates were all based on the 2015 enrollment numbers (11.7 million nationally); 2016 bumped this up by another million people, although the relative increases vary by state.

THANKFULLY, just today, the CMS division of HHS released a highly-detailed 2016 QHP selection report (for the 38 HC.gov states only)...which, for the first time, breaks out income levels into the 100-138% FPL range!

In all, 2,687,315 people within the 100-138% range selected QHPs via HC.gov this year. 18 of the 19 non-expansion states are included, because Idaho runs their own full exchange. Subtracting out the states which did expand Medicaid leaves us with the following (I'll explain my estimate for Idaho below): 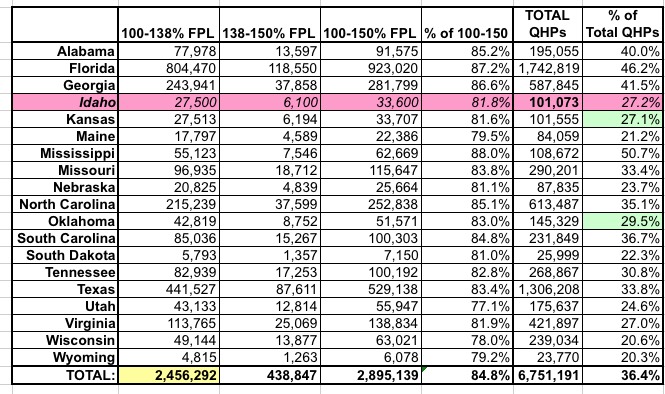 Exactly 101,073 people selected QHPs during OE3 in Idaho. This is almost identical to the number who enrolled in Kansas. I don't know whether economic demographics are similar between these two states, but assuming they are, the 100-138% level should be pretty close as well, The other 18 states are all hard numbers from the CMS/ASPE reports for this year.

This shows that nearly 2.5 million people in non-expansion states fall into the 100-138% category.

Interestingly, as Sprung just pointed out to me, this means that there's also another 258,000 people in that income range in expansion states who are enrolled in exchange policies...presumably made up of legal noncitizens and other special categories.

HOWEVER, there's one more step we need to take: How many were actually enrolled in effectuated policies as of the end of March?

When you plug those numbers into the spreadsheet, you get slightly lower numbers...assuming that there's an even spread among those who failed to pay/dropped out between January and March (which obviously may not be the case):

There you have it. As of March 31st, 2016, roughly 2.1 million people who were enrolled in ACA exchange-based private policies would instead be eligible for Medicaid if the 19 states above were to expand the program.

This represents around 19% of all current exchange enrollees.

UPDATE: OK, a couple of addtiional notes, as pointed out to me by Sprung:

I've expanded the spreadsheet even further to include the additional data:

UPDATE x2: As Josh Schultz pointed out, at least a portion of the 2.1M might be due to the fact that some Medicaid-eligible exchange enrollees were also enrolled in private QHPs as well as Medicaid by mistake, due to lingering technical bugs in the "no wrong door" system. Neither he nor I know how many people this might apply to, however. For this and the other reasons noted above, I'm changing this to "up to" 2.1 million.