If you have any interest in healthcare, politics or life in general, read The Ten Year War. 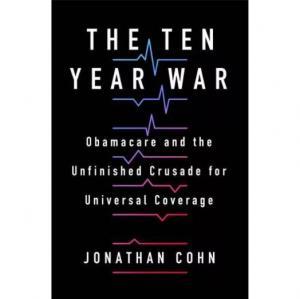 Those who've only started visiting my blog or following me on Twitter recently may be under the impression that I know everything there is to know about the Patient Protection & Affordable Care Act, simply because I never shut up about it.

Those who've been following my work since I launched the site know the truth: Until October 2013, I didn't know that much more about the ACA than the average person.

Don't get me wrong: I had been following the ACA saga since the 2008 Democratic primary battle between Barack Obama and Hillary Clinton, and was watching the legislative progress grind along throughout 2009 - 2010...but I was doing so mostly from a distance. I didn't have a deep understanding of the details of either the legislation or the political process happening behind the scenes.

Even after I launched ACA Signups, it started out purely as a "bean counting" hobby: I was simply tracking how many people were enrolling in ACA exchange plans during the first confusing Open Enrollment Period. It was probably another year before I had a strong understanding of most of the details of the law itself, and even now I'm still learning more every day, thanks to learning from some of the most knowledgeable experts on the ACA, as well as on healthcare policy in general.

One of those experts is healthcare policy writer Jonathan Cohn. Cohn used to work at The American Prospect and the New Republic before moving to his current position with Huffington Post. The earliest indirect encounter I can find between Cohn and myself was back in March 2014, which also happened to be when I was at the peak of my 15 minutes of fame as the "Obamacare Enrollment Guru" or whatever they were calling me at the time.

Since then our paths have crossed directly a few times; we even both appeared on the same public health policy panel in Ann Arbor, Michigan a year ago this week...ironically, just days before the COVID-19 pandemic threw the entire world out of sync.

In any event, no one knows the history of the Affordable Care Act better than Cohn, and his new book, "The Ten Year War: Obamacare and the Unfinished Crusade for Universal Coverage" proves it. Instead of simply being a dry, by-the-numbers list of names and dates, "The Ten Year War" is a fascinating, deep dive into the full history of healthcare reform in the United States from long before Barack Obama was even born up through the failure of the GOP to repeal the law under the Trump Administration even with full control of both the House and Senate...and their loss of that control in the 2018 midterm election and beyond.

Cohn manages to seamlessly weave personal stories and histories of key individuals in with the wonky legislative details in a way which provides rich context into why many of the players acted as they did throughout the process. I learned a lot about the insanity which preceded my dipping my toe into the ACA waters in fall 2013, but I also learned new details about some of the stuff which has happened since then.

Recommended for anyone with even a passing interest in either healthcare policy, politics or drama of any sort in general. Strongly recommended for anyone fuming about the seemingly glacial pace at which healthcare reform happens. Perhaps the single most important takeaway anyone can take from The Ten Year War is a simple one: Healthcare. Is. Hard.

In all seriousness, I don't think I've devoured a full-length book this quickly in years. I was fortunate enough to get an advance copy and read it cover to cover within 3-4 days.

(And yes, full disclosure: My own work here at ACA Signups even gets a brief mention!)