Joseph R. Biden took office yesterday at around 11:50am (around 10 minutes ahead of the noon, I should note...I don't know if that's typical or if it was done slightly early for security reasons).

According to Worldometers, as of 1/20/21, the 50 United States & 6 U.S. Territories had officially reported 415,905 cumulative COVID-19 deaths since the first official case was reported exactly one year earlier. According to the COVID Tracking Project, the official U.S. death toll is at 398,000 people. Johns Hopkins University puts it at 408,000, and the CDC put it at just over 400,000. If you average these out, the Trump Administration concluded with around 405,000 officially diagnosed COVID-19 deaths.

This morning, CNN reported the obvious:

Newly sworn in President Joe Biden and his advisers are inheriting no coronavirus vaccine distribution plan to speak of from the Trump administration, sources tell CNN, posing a significant challenge for the new White House.

The Biden administration has promised to try to turn the Covid-19 pandemic around and drastically speed up the pace of vaccinating Americans against the virus. But in the immediate hours following Biden being sworn into office on Wednesday, sources with direct knowledge of the new administration's Covid-related work told CNN one of the biggest shocks that the Biden team had to digest during the transition period was what they saw as a complete lack of a vaccine distribution strategy under former President Donald Trump, even weeks after multiple vaccines were approved for use in the United States.

"There is nothing for us to rework. We are going to have to build everything from scratch," one source said.

Another source described the moment that it became clear the Biden administration would have to essentially start from "square one" because there simply was no plan as: "Wow, just further affirmation of complete incompetence."

This afternoon, on the first full day of his term in office, President Biden was clear and to the point:

Many of the responses to this tweet are pathetic, and I'm sure you can imagine why.

Let's do some basic math, shall we?

Let's take a look at a 3-week 7-day average projection, based on the assumption that around 1 out of 60 who test positive will die around 3 weeks later, compared against the actual reported deaths: 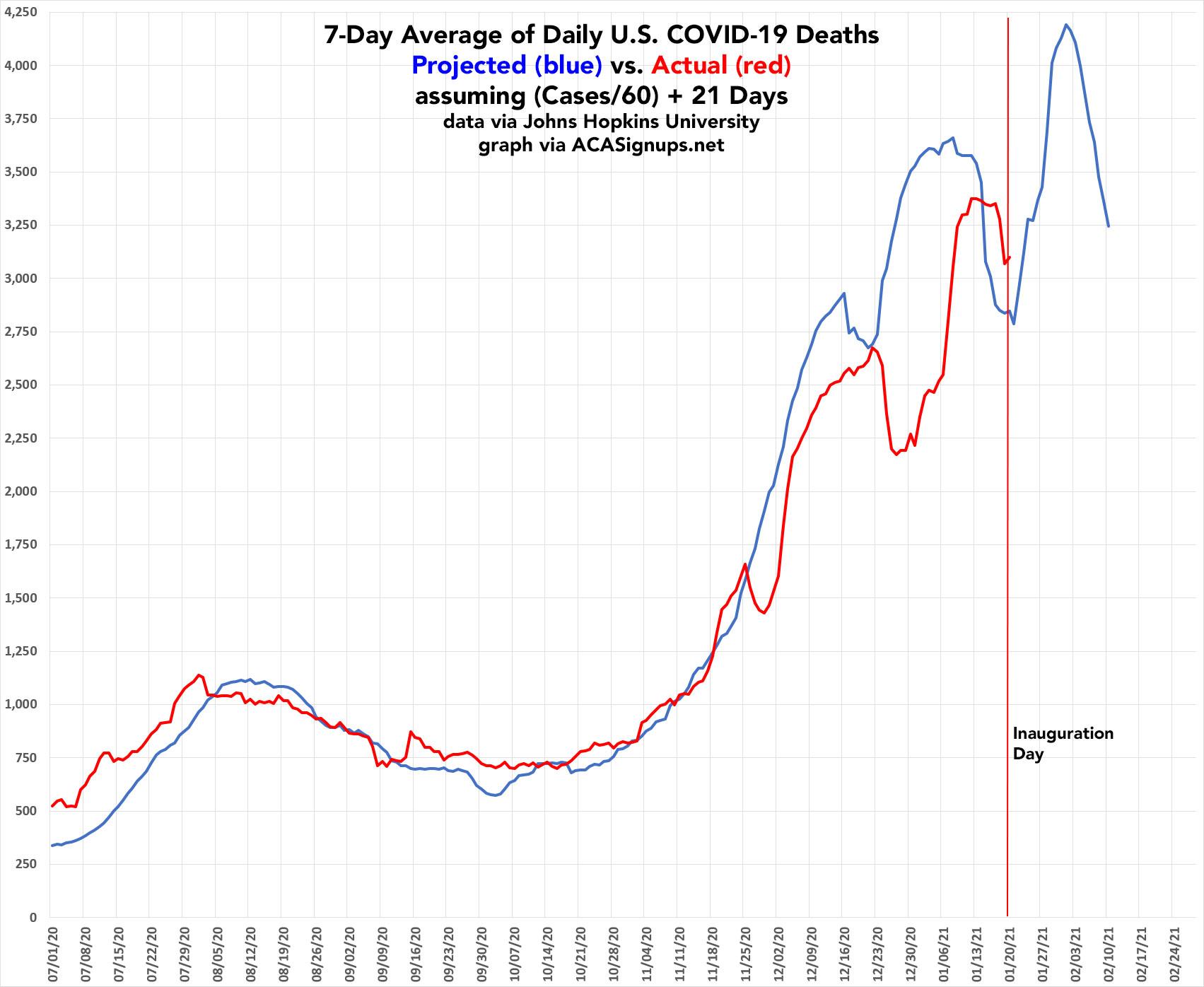 This model was eerily accurate from July through Thanksgiving of 2020, at which point it got skewed due to substantial reporting lags over the extended Thanksgiving, Christmas/ New Years and Martin Luther King Jr. holidays. Even with those drop-offs, the average daily deaths reported is clearly bouncing back each time to coincide with the average daily cases being reported.

At the moment, we're averaging over 4,000 Americans dying each day of COVID-19, and it looks very likely that this will peak at around 5,000 or so right around January 29th before starting to drop off after that.

If this model proves accurate going forward, that would mean another 41,000 deaths by the end of January, and another 75,000 deaths by around February 10th (at which point the model stops, since that's 3 weeks from today). That alone would put us at 480,000, and would include the last of those who tested positive prior to January 20th, 2021.

What about after that?

Well, let's say that the Biden Administration is able to fully ramp up the federal response in record time, taking just 10 days to get their ducks in a row. We've been averaging around 220,000 new positive cases per day over the past week or so, so let's assume that holds steady at 220K cases/day until Janury 31st. That would mean another 3,600+/day through February 21st, or 116,000 total deaths since yesterday, or 521,000 total. That's well over 500,000 and there'd still be a week left in February.

From that point on, let's assume that the Biden Administration starts off February 1st massively ramping up vaccinations and sees a substantial increase in complaince with mask wearing, social distancing, avoiding indoor gatherings and so forth. Let's assume that this results in a 2% drop in new cases each and every day vs. the day before it.

(This is of course an absurdly oversimplified calculation for dozens of reasons, but I'm just trying to illustrate a point about growth and reduction rates over time.)

IF this were to be the case, how long would it take to get the number of new daily cases down to no more than, say, 500 new cases per day nationally?

That's right: The above scenario (220K/day for the next 10 days, followed by a 2% drop each day after that) would result in:

Obviously there's no way of knowing what the actual path will look like going forward, and there's no way it's going to follow a straight-line 2%-per-day drop-off path. Seasonal drop-offs and surges alone will skew the math dramatically; compliance will continue to vary widely from state to state, county to county, city to city and business to business. In addition, none of this takes into account the new, more contagious strains...but it also doesn't take into account improvements in treatments, new types of vaccines and so forth. This is just one possible (and unlikely) scenario.

The point is that yes, the odds of hitting 500,000 dead Americans by the end of February are extremely high, and the odds of ending this nightmare with the total death toll being less than 700,000 Americans is pretty low even if everything works perfectly going forward.

The bottom line is that we blew it badly as a nation last year. Between the Trump Administration botching the job terribly, many states refusing to impose or enforce social distancing & masking requirements, and far too much of the public not taking the pandemic seriously enough (if at all), there's no way of putting this particular genie back in the bottle. The damage from last year will continue well into this year, and while the Biden Administration will do all it can, expecting this mess to "just go away, like magic," as someone else said last spring, is delusional.

We're in for another ugly year under the best of circumstances, folks, so buckle up...AND WEAR A GODDAMNED MASK (including over your nose).