When I was in college at Michigan State in the early 1990's, there was a kid on my dorm floor who signed up for the old Columbia House CD* Club. For those of you too young to remember, here's how it worked:

Any music fan eager to bulk up their collection in the ’90s knew where to go to grab a ton of music on the cheap: Columbia House. Started in 1955 as a way for the record label Columbia to sell vinyl records via mail order, the club had continually adapted to and changed with the times, as new formats such as 8-tracks, cassettes, and CDs emerged and influenced how consumers listened to music. Through it all, the company’s hook remained enticing: Get a sizable stack of albums for just a penny, with no money owed up front, and then just buy a few more at regular price over time to fulfill the membership agreement. Special offers along the way, like snagging discounted bonus albums after buying one at full price, made the premise even sweeter.

By the mid-’90s, too-good-to-be-true deals such as eight (or more) CDs or 12 cassettes for a penny had codified into pop culture lore. So what if these CDs were way more expensive than ones purchased in stores, after factoring in shipping? After all, gaming the system by joining under fake name(s) or addresses—or sending back unwanted albums or accidental orders by scrawling “return to sender” on the box in which they arrived—was a snap. Whether buyers were allowance-challenged, wanting to replace fusty vinyl with shiny plastic CDs, or simply not within driving distance of a store that sold music, Columbia House was clearly addressing consumer demand.

*Sidenote for those too young to know what a "CD" is: "CD" stands for "Compact Disc", and it was a round, physical disc which held up to perhaps an hour's worth of digital music; it looked and felt nearly identical to a DVD.**

**Sidenote for those too young to know what a "DVD" is: "DVD" stands for "Digital Video Disc"; it was a round, physical disc which held up to perhaps three hours worth of digital content, including video and audio.

The exact number of CDs you could purchase for "just a penny" (sometimes it was "for just a dollar" or "for the price of one") varied, as did the number of additional CDs you had to purchase over the next year or so at "regular Club prices", but you get the basic concept. Once you were signed up, it was made pretty difficult to cancel your account; combined with people's tendency to be lazy and to be reluctant to pass up a "bargain", Columbia House did very well for a very long time.

Anyway, the kid I went to college with decided to be very savvy about his membership: He ordered the bare minimum required under the terms of the contract all in one shot: The initial "8 for the price of one" plus the "four more at regular Club prices" right off the bat, paid for them all including whatever the shipping/handling fees were, and voila: He had fulfilled the contract as soon as the box of CDs showed up and his check*** cleared. He even included a note with the check asking them to cancel his account.

***Sidenote for those too young to know what a "check" is: "A check is a written, dated, and signed instrument that directs a bank to pay a specific sum of money to the bearer. The person or entity writing the check is known as the payor or drawer, while the person to whom the check is written is the payee. The drawee, on the other hand, is the bank on which the check is drawn."

All was well until a couple of months later, when he received a "past due" statement from Columbia House, claiming that he owed them a final balance...of $0.00. We got a chuckle out of this and he ignored the statement, assuming that this was just a clerical thing needed to clear the account from the system.

A month later, he received a follow-up statement with stronger, bold-faced language stating that he was still past-due and now owed a 5% late fee. Five percent of $0.00, that is...for a total past-due of $0.00.

He tried to contact them, was given the runaround by their customer service department, and was finally told that it was a clerical error but that it had been straightened out and not to worry about it.

A month later he received a "FINAL NOTICE" statement with big, red letters warning him that if he didn't pay the $0.00 immmediately he'd be referred to a collection agency.

At this point it wasn't funny anymore...would this screw up his credit rating or whatever? So he came up with a simple, but clever idea:

He wrote out a check for $0.00 and sent it in with the statement.

He never heard from Columbia House again...at least for the rest of the school year. He transferred to a different dorm the next year so I don't know if there was any more to the story, but I assume his check for nothing made Columbia House's billing system happy and they quit pestering him.

NOTE: Snopes has a similar, if much more elaborate version of this listed as a "legend"...except for a critical difference: In the Snopes versions, sending a $0.00 check caused the computer systems to get screwed up, whereas in my actual college dormmate's case, doing so resolved the issue...except in his case my guess is that some clerk at Columbia House's payroll department simply realized what the problem was and terminated his account without ever even trying to deposit the check itself.

Why am I telling you this story? Well, because as absurd as it may sound, the fate of the entire Patient Protection and Affordable Care Act now rests on how the U.S. Supreme Court interprets the meaning of a similarly surreal idea.

Again, the entire premise of the California v. Texas lawsuit (previously Texas v. U.S., aka Texas v. Azar, aka #TexasFoldEm) is as follows:

That's it. That's their entire case. You don't have to be a Constitutional scholar to see several critical flaws in their logic here:

(1) In general.-- <<NOTE: Penalty.>> If an applicable individual fails to meet the requirement of subsection (a) for 1 or more months during any calendar year beginning after 2013, then, except as provided in subsection (d), there is hereby imposed a penalty with respect to the individual in the amount determined under subsection (c).

(2) Inclusion with return.--Any penalty imposed by this section with respect to any month shall be included with a taxpayer's return under chapter 1 for the taxable year which includes such month.

Note that (2) above stats that the penalty shall be included with a taxpayer's federal tax return for the taxable year that they didn't have minimum essential coverage. So, fine: If you owe $1,000.00 in federal taxes for everything else, you have to add to that your lack-of-MEC penalty...which is $0.00.

If you don't write a check, have you paid your taxes? Yes, as long as you actually file your tax return.

Well, I don't know how the IRS's bank would actually handle the physical check--I've called around to a couple of banks and they say it would be rejected because the computer system simply can't handle a null check amount--but I'm pretty sure the IRS won't come after you for not paying your taxes whether you do so or not...again, as long as you've filed and turned in your 1040 on time.

Except, of course, that this is nonsense. Lots of things used to be essential once upon a time which no longer are today. It used to be essential for every child to know how to skin a wild boar, for instance...or for every driver to know how to drive a manual transmission. That doesn't mean that those skills are absolutely essential today (unless you happen to own a stick shift). Situations change over time.

At the time, lots of insurance carriers simply refused to participate in the ACA marketplace exchanges at all without some sort of assurance that they wouldn't be taken advantage of or gamed; the ACA responded with two assurances: First, the limited-time Open Enrollment Period; second, the Individual Mandate Penalty. If one or both of these hadn't been included at that time, many of them would have bailed, hundreds or thousands of counties would have "gone bare" and the ACA would indeed have been a complete disaster before it ever properly launched.

Since then, however, the situation has changed dramatically. After several rocky years, the individual insurance market is now so stable that numerous carriers which dropped out a few years earlier have jumped back in...and unsubsidized premiums, which shot up as much as 30% or more per year as recently as 2018, have stabilized to the point that they averaged just a 3% increase in 2019, were virtually flat in 2020 and currently look to only be increasing perhaps 0.5% for 2021 so far. Enrollment in the individual market has indeed dropped off substantially (mostly among unsubsidized enrollees), but the number of subsidized enrollees has continued to hover around the 8 million mark for four years straight...including in 2019, the first year with a $0 federal mandate penalty.

But wait, you say: Aren't you the one who keeps pointing out that zeroing out the penalty led to significant premium increases?

Yes, yes I did...although not nearly as significant as many (including myself) had projected. The CBO had assumed it would cause a one-time 10% spike in 2019, but I pegged it at actually being closer to 8%, while the Kaiser Family Foundation put it at around 6%. That translates into somewhere between $440 - $580/enrollee per year; let's split the difference and call it $500 even.

The thing is, while having to pay an extra $500/year may suck for the enrollee, and therefore did cause some damage to the ACA's effectiveness..."caused some damage" isn't remotely the same thing as "completely totalled". In fact, most of that "damage" didn't end up being to the ACA itself anyway, because most of that $500/apiece hit was actually paid for in the form of increased federal subsidies for those 8 million or so subsidized exchange enrollees.

This is precisely why I keep pointing out that the "Red Leg" of the ACA wasn't actually ripped away...it was immediately replaced with the World's Most Expensive Shim®: 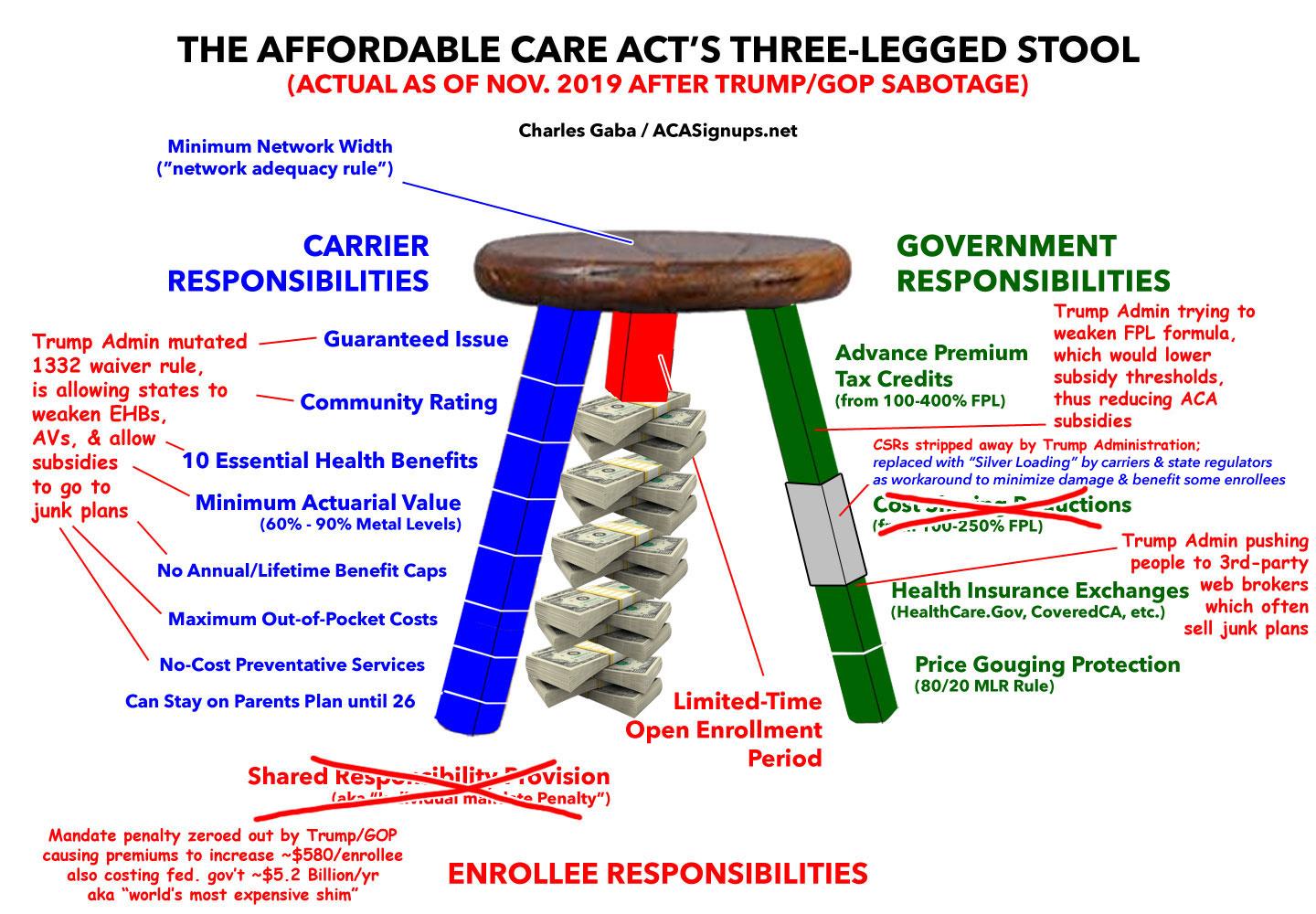 In other words, the only evidence required to prove that a zero-dollar mandate penalty, while unfortunate, is not "essential" to the ACA functioning is the fact that...THE ACA CONTINUES TO FUNCTION.

It may run clunkier than it should. It may not run as efficiently as it should. But it's still chugging along, providing healthcare coverage to over 20 million people who wouldn't have it otherwise and protections for those with pre-existing conditions to tens of millions more.