OK, Donald, let's see what happens if you "remove the blue states."

Today, Trump himself personally removed any lingering doubt about his politicizing the response to the pandemic in a White House press briefing:

"If you look at what we've done and all of the lives that we've saved...this was right at the beginning...this was our prediction that if we did a really good job, we'll be at between 100,000 and 240,000 deaths...and we're below that substantially, and we'll see what comes out...if a not-so-good job was done, you'd be between 1.5 million...I remember these numbers so well...and 2.2 million...so we're down in this (lower) territory...and that's despite the fact that the Blue States had tremendous death rates. If you take the Blue States out we're at a level that I don't think anybody in the world would be at...at that level..."

Yeah, that's right: Trump is now openly claiming that COVID-19 is a "Blue State" problem and that the only reason he's getting any criticism for his response is because the "Blue States" did a lousy job, making him look bad.

To which I say...OK, Donald, let's take another look at what a "great job" you've done with just the Red States.

Here's an updated version of the graph in which I break out the Blue States, Red States and Swing States by both COVID-19 cases and deaths per capita (cases are per 1,000 residents; deaths are per 10,000 to make the changes over time more visible): 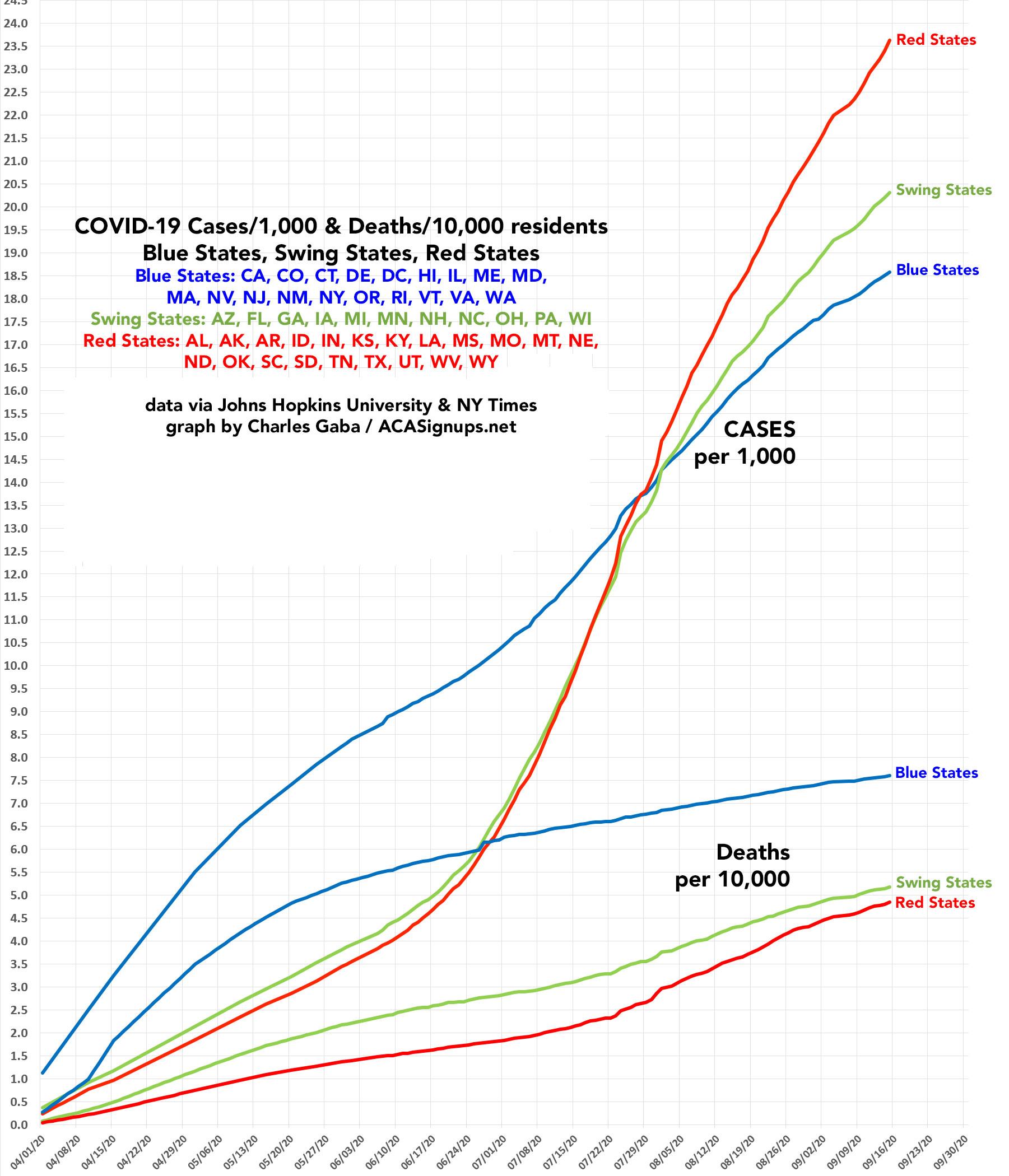 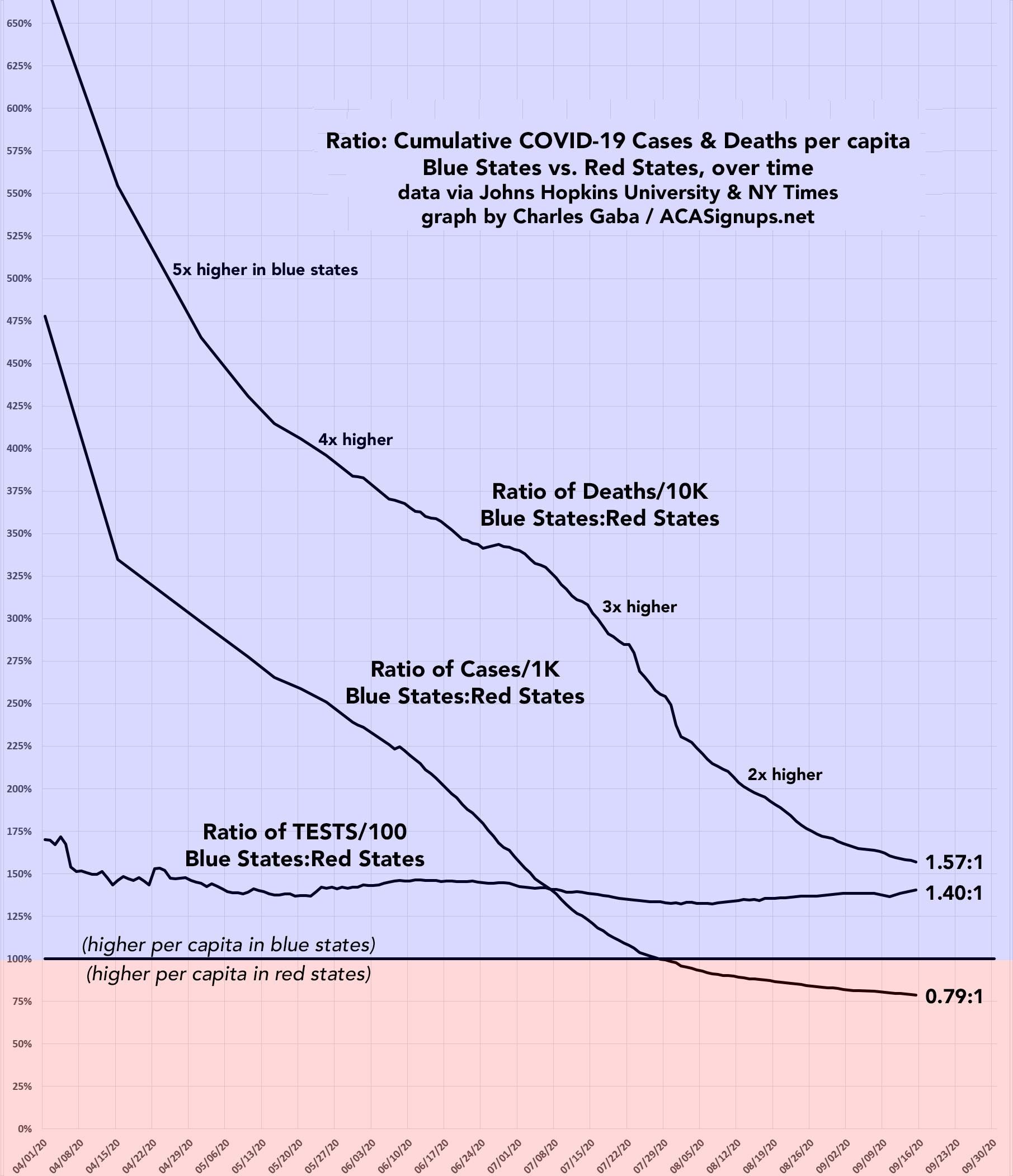 Looking at this another way, how does the U.S. stack up against other countries around the world in COVID-19 mortality, and what would it look like if you "removed the Blue States" (or the Red States for that matter)? Well, here's what it looks like using data from WorldOMeters, which is one of the more reliable COVID-19 data collation websites: 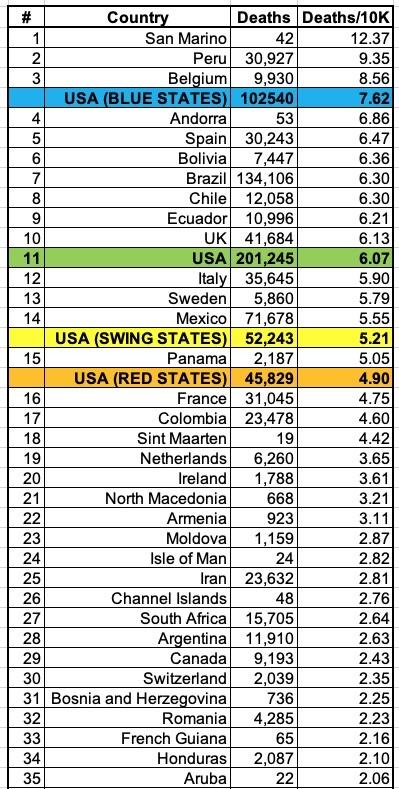 As you can see, the United States currently has the 11th highest COVID-19 mortality rate in the world. If you disregard San Marino (population 34,000) and Andorra (population 77,000), it ranks 9th.

The Blue States of the U.S. would rank 4th, behind San Marino, Peru and Belgium, while the Red States would rank 16th (17th in this scenario, since we're assuming the U.S. was split into three nations...Blue, Red and Swing). Yes, that's significantly lower than the Blue States...but not by that much, and it certainly wouldn't be a record I'd be proud of. The Red States by themselves would still have a higher COVID-19 mortality rate than France, Ireland, Iran and nearly 200 other countries. Hell, the Red States are only 16% below Italy and Sweden, which we watched in horror last spring.

Now, a couple of people have pointed out that in this instance, Trump is defining a "Blue State" as any state which is run by Democrats, regardless of its overall political lean. In other words, he's talking about states with Democratic governors. This changes thing a bit: Blue States Maryland, Massachusetts and Vermont have Republican governors, while Red States Kansas, Kentucky, Louisiana and Montana all have Democratic governors. In addition, all of the Swing States have to be lumped in with one group or another using the governor criteria.

I don't have the historic data to run a graph over time, but here's what the "Blue State/Red State" COVID-19 death rates look like as of mid-September using this definition: 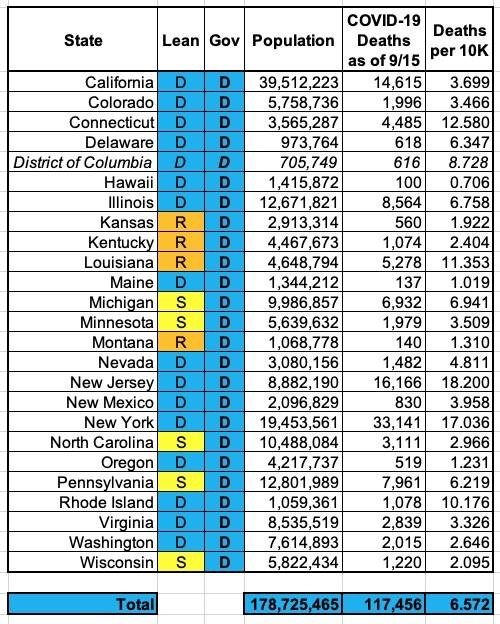 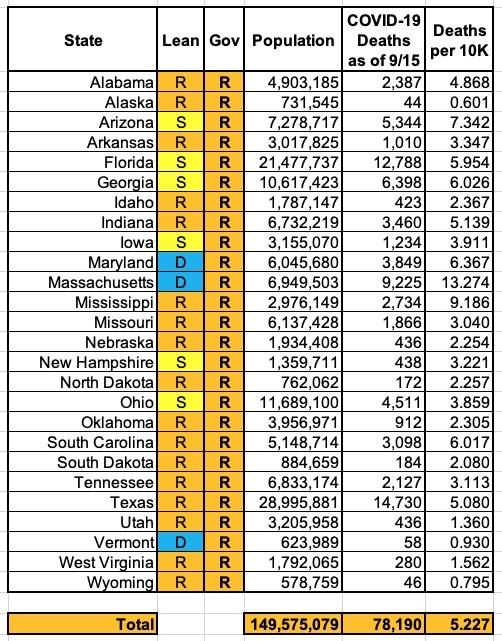 Yes, that's right: It's even closer...when you go strictly by whether a gven state has a Republican or Democratic governor, the Blue State death rate is just 26% higher than in the Red States.

And yes, that's closing very quickly. Again, I don't have the data for every day using this criteria, but I do have the 15th of each month, so I whipped up another quickie graph: 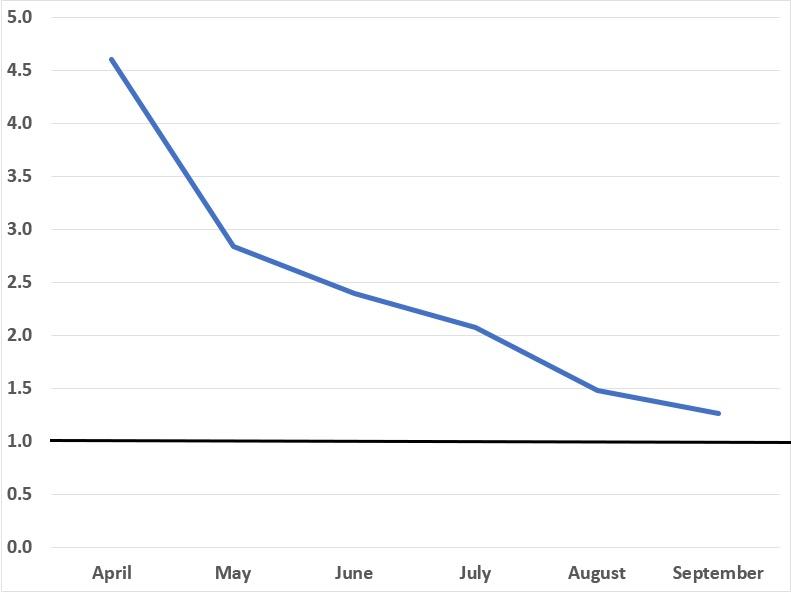 My guess is that using the "red/blue governor" benchmark, the Red State mortality rate will be roughly the same as in the Blue States by right around...early November.