Paulding County, Georgia has a population of around 169,000 people. According to Johns Hopkins University, as of yesterday, they had 1,452 known COVID-19 cases and 19 COVID-19 deaths.

That's around 8.6 cases per thousand residents, which is lower than 37 states (but still higher than Colorado, Ohio or Washington), but 1.13 deaths per 10,000 residents, which is higher than...well, in the upper half of counties in America (Paulding ranks #1,478 out of over 3,100 counties/county equivalents nationally).

This is the first day of school in Paulding County, Georgia. 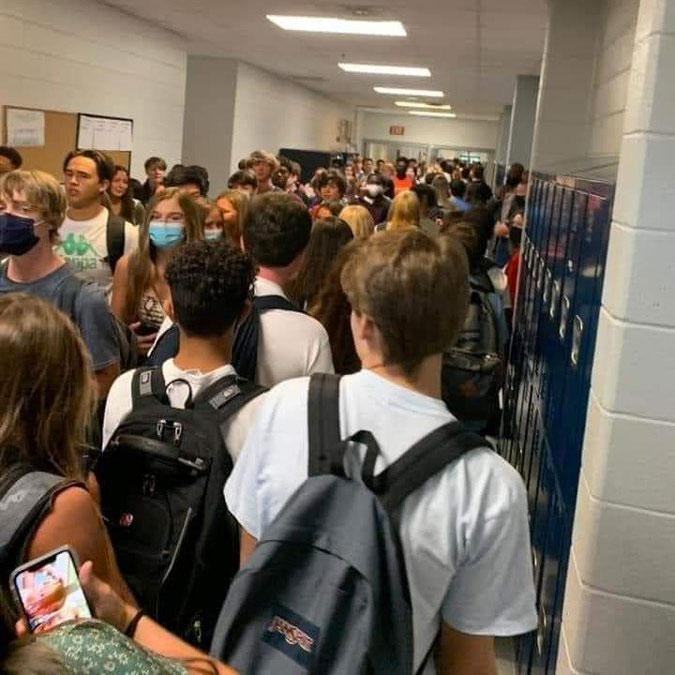 It's difficult to see most of the faces either due to them facing the other way or being obscured by other students, but of the ones I can see clearly, I count five students wearing a mask and seven not wearing a mask. 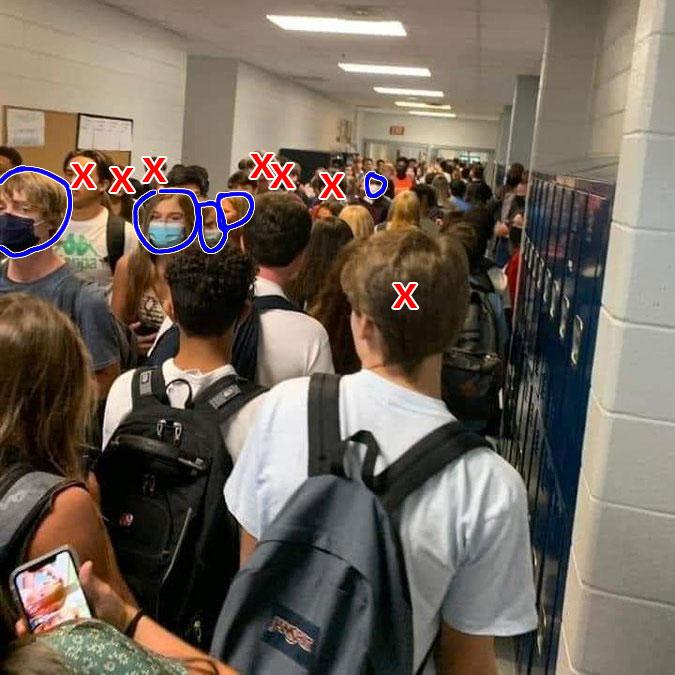 As someone else already noted...

Mask wearing is maybe 5%. No social distancing. Completely packed. Indoors. Likely with the AC roaring because it's Georgia in August.

This is a local story from yesterday:

PAULDING COUNTY, Ga. — Concerned students, teachers and parents have reached out to Channel 2 Action News after a metro Atlanta high school reported cases of coronavirus days before the start of the school year.

School is set to start on August 3 with both in-person and virtual learning options. More than 20,000 of the district’s 31,000 students have signed up for in-person classes.

This is going to be a disaster by the weekend. Paulding County has 1 small hospital not capable of handling a surge. Neighboring Marietta has 5 teachers testing positive to date. Atlanta Hospitals are already inundated.

This is a recipe for disaster.

Behind a viral photo of a crowded hallway at a high school in Georgia, a potentially dire situation is brewing. Students, teachers, and parents fear the Paulding County school’s rushed reopening plans may be spiraling out of control just two days after students — who said they were told they could face expulsion for remaining home — returned to class despite reports of positive coronavirus cases among students and staff.

North Paulding High School, about an hour outside Atlanta, reopened Monday despite an outbreak among members of its high school football team, many of whom, a Facebook video shows, worked out together in a crowded indoor gym last week as part of a weightlifting fundraiser.

...And multiple teachers at North Paulding say there are positive tests among school staff, including a staff member who came into contact with most teachers at the school while exhibiting symptoms last week. Teachers and staff said the school won’t confirm coronavirus infections among district employees, citing privacy reasons.

...Despite recommendations from CDC health officials, the district has called mask-wearing a “personal choice” and said that social distancing “will not be possible to enforce” in “most cases.” While the school provided teachers with face shields and masks and encouraged staff and students to wear them, they are not required and not all teachers have chosen to use them. One North Paulding teacher resigned last month over concerns about virus safety.

...James’ parents saw the photograph that had been circulating Tuesday and told him, “You are not going back to school again,” he said. But a few hours later, his mother had spoken to the school and was told that students who “chose not to go to school” could face suspension or expulsion.

On Wednesday, he went back to school. “I had no choice,” he said.