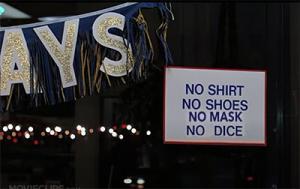 More recently, this hyper-tribalism has devolved further yet, to the point that "standing 6 feet apart" and "wearing a mask when out in public" have become a flashpoint...and it's bleeding over from politicians into private companies.

AMC Theater CEO Adam Aron says their cinemas won't require masks upon reopening because they didn't "want to be drawn into a political controversy" https://t.co/zNjy9wzGMK

Requiring people wear masks when going to a indoor public place where they're expected to sit in close proximity inside a room with 200-300 other people with recirculated air in the middle of a highly contagious pandemic is NOT "a political controversy". People are required to wear shirts and shoes when going to a restaurant, and you don't hear anyone screaming about their liberties being infringed..and that's without a pandemic which has already killed 120,000 Americans and infected over 2.2 million more. Hell, there was a whole scene about this in Fast Times at Ridgemont High.

And yet, because the President of the United States and his administration decided to make "wearing a mask" into a litmus test about whether you were With Him or Against Him, here we are:

Oklahoma governor Kevin Stitt on why he doesn't support mandating masks at the Trump rally in Tulsa: "We are going to follow the president and the vice president's lead on that ... my question back to all the folks that say you shouldn't have a rally -- when is the right time?" pic.twitter.com/DzbcjMD4A0

So yeah, you can expect to see me continue to track the "red county/blue county" coronavirus trendlines over the summer and into the fall...because as insane as it may be, it's become a political and cultural flashpoint which will continue to impact public health policy and the November election itself whether we like it or not...and there's no going back now.