Just how deadly is #COVID19? It's complicated.

Just how deadly is COVID-19? The answer might seem obvious on the surface--divide the number of victims who die by the total number infected--but it's actually a lot more complicated than that. This isn't a particularly profound insight, but it's worth laying out the basics for the record.

As of this writing, according to Worldometers.Info (one of the most reliable, accurate sources of COVID-19 data), around 560,000 Americans have tested positive for the virus, of which around 22,000 have died. Officially, that's a mortality rate of 3.94%.

There's a lot of problems with both the numerator and denominator here, however. First, let's look at the numerator:

The official tally of COVID-19 victims who've died could be too high...or too low for any number of reasons:

The fast-spreading novel coronavirus is almost certainly killing Americans who are not included in the nation’s growing death toll, according to public health experts and government officials involved in the tally.

The U.S. Centers for Disease Control and Prevention counts only deaths in which the presence of the coronavirus is confirmed in a laboratory test. “We know that it is an underestimation,” agency spokeswoman Kristen Nordlund said.

A widespread lack of access to testing in the early weeks of the U.S. outbreak means people with respiratory illnesses died without being counted, epidemiologists say. Even now, some people who die at home or in overburdened nursing homes are not being tested, according to funeral directors, medical examiners and nursing home representatives.

Postmortem testing by medical examiners varies widely across the country, and some officials say testing the dead is a misuse of scarce resources that could be used on the living. In addition, some people who have the virus test negative, experts say.

A personal note: My own aunt died about a month ago in the 2nd week of March...supposedly from pneumonia. I don't know any of the details...she was in her late 80's and had been pretty frail the past few years, so it's entirely possible that she did indeed die of pneumonia...but it's also conceivable that she was misdiagnosed, since the two have some similar symptoms. Or perhaps it was a combination of pneumonia and COVID-19 and she would have passed away anyway. The point is that it's not out of the question that her death should have been counted as a COVID-19 death and wasn't.

Next, let's look at the denominator: Again, the numbers here are based purely on people who have been documented as having tested positive for the virus.

As everyone knows by now (I don't think I need a link, but there's hundreds of stories about it), the U.S. is vastly behind where we should be in terms of how many COVID-19 tests have been made available or performed. As of this writing, according to the COVID Tracking Project, just over 2.8 million tests have been performed in the U.S. Since many of those infected are asymptomatic and others only show mild symptoms, it's likely that the actual number infected is much higher than the official 557,000 tally...perhaps by a factor of 10 or more.

Even among those who are being tested, there are other factors which skew the numbers up or down. That 2.8 million figure is the number of test results, not the number of people tested. This is important because some people have been tested more than once (although this is likely a small percentage of the total, given the dearth of tests available).

In addition, there's always going to be at least a small number of false positives...or false negatives.

Finally, there's a wide range of reporting policies and procedures. California had a huge backlog of delayed test results which had been performed but not reported, though they cleared that up last week. Then there's cases like American Samoa:

American Samoa has no testing facilities and must send samples from all suspected cases to faraway labs, which means that test results can take over a week to come back. There is therefore very little information about testing on its official pages. The last information we have about testing of American Samoan residents is a news source from 3/28.

Our historical data for American Samoa has been inaccurate. We are addressing the issue.

Then there's my home state of MIchigan:

On 3/26, Michigan began reporting "total specimens" tested. We added this number 4/5 after much debate. It is an imperfect measure of "people tested," but is the only number the state offers. It is likely that fewer people have tested negative than this number indicates, but it is impossible to calculate a more realistic number.

...and so on. Statistics are only as accurate as the underlying data, and with something this huge--where the data is changing daily and even hourly in some cases--there's always going to be some margin of error.

The problem here, of course, is that they were infected on 3/01, they tested positive on 3/15 and they died on 3/25. Some of those infected may never require hospitalization. Some may be on a ventilator longer. Some may recover. Some may die later, and so on.

Here's what that looks like since March 25th (this was the day that confirmed COVID-19 deaths in the U.S. passed the 1,000 mark): 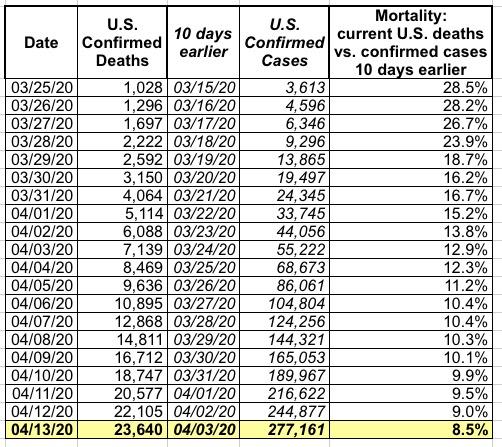 As you can see, the "mortality rate" based on the number of positive tests has been steadily dropping every day even as the rate of deaths was increasing...because the testing has been ramping up more quickly than people have been dying. The testing ramp-up is actually a good thing, and it will hopefully continue for awhile, but the bottom line is that the actual mortality rate of those testing positive is still likely somewhere between 3.9 - 8.5%.

I'm praying, of course, that I'm way overshooting here and that the actual mortality rate ends up being far lower than that.

UPDATE 4/13: I've updated the table through tonight, and the mortality vs. 10 days ago continues to drop; it's down to "only" 8.5% now. Projected forward, that suggests around 50,000 of the 587,000 who've tested positive to date will die (26,000 more than the 23,640 who already have). At the same time, the mortality rate vs. today's positive cases continues to inch upwards and now stands at 4.0%. My guess is that the two numbers will continue to converge until they settle in at...what, 5% or so?