Important: The tables and graphs for examples in Massachusetts look a different from most states for two reasons:

First, MA has a different Age Band rule for health insurance premiums. In most states, the ACA allows premiums for older enrollees to cost up to 3x as much as they do for younger enrollees. As a result, the unsubsidized price for a 64-year old will generally be 3x higher than for a 21-year old enrollee. In Massachusetts, however, this range is limited to a 2:1 ratio,

In addition, Massachusetts already has their own, unique state-based supplemental subsidy program in place for ACA enrollees earning less than 300% FPL. Unlike California, which simply shaves a point or two off the premiums for those earning 200-400% FPL, Massachusetts' program actually enrolls people earning 138 - 300% FPL into special, separate ACA-compliant policies called "ConnectorCare".

ConnectorCare policies are very generous, with no deductibles or coinsurance, reasonable co-pays and very low premiums. They remind me very much of New York and Minnesota's Basic Health Plan programs, which are allowed by and funded by the Affordable Care Act. The biggest differences are:

It's worth noting that Massachusetts has had the lowest unsubsidized (full-price) individual market premiums in the country for seven years running, so perhaps other states should take a look at how they have things set up?

With all this in mind, here's the case studies, with extra columns added to account for MA's unique ConnectorCare arrangement:

Since they're younger, the full-price premium never actually hits the ACA's subsidy cliff at 400% FPL anyway; between that and the ConnectorCare program, H.R. 1868 would only be relevant to those earning between 300 - 400% FPL...but it'd still save them up to $1,000/year, which isn't bad. 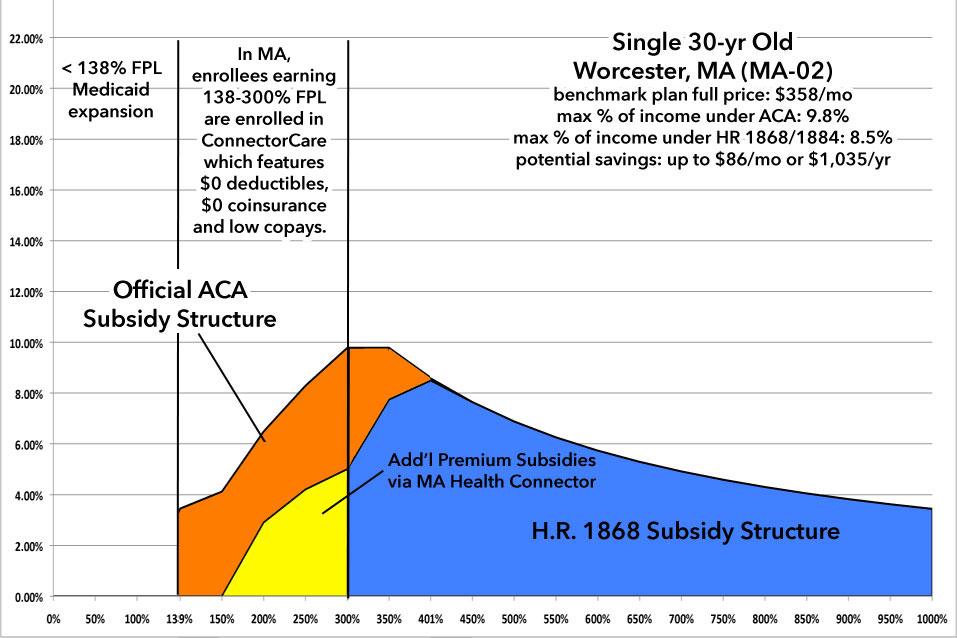 At 60 years old, the single adult's full-price premium is nearly twice as much as the 30-year old. This means that the ACA's subsidy cliff is now quite apparent. Again, up to 300% FPL they'd be enrolled in either Medicaid or a low-premium/$0 deductible ConnectorCare policy, but over 300% FPL, under H.R. 1868 they'd save as much as $300/month or over $3,600/year: 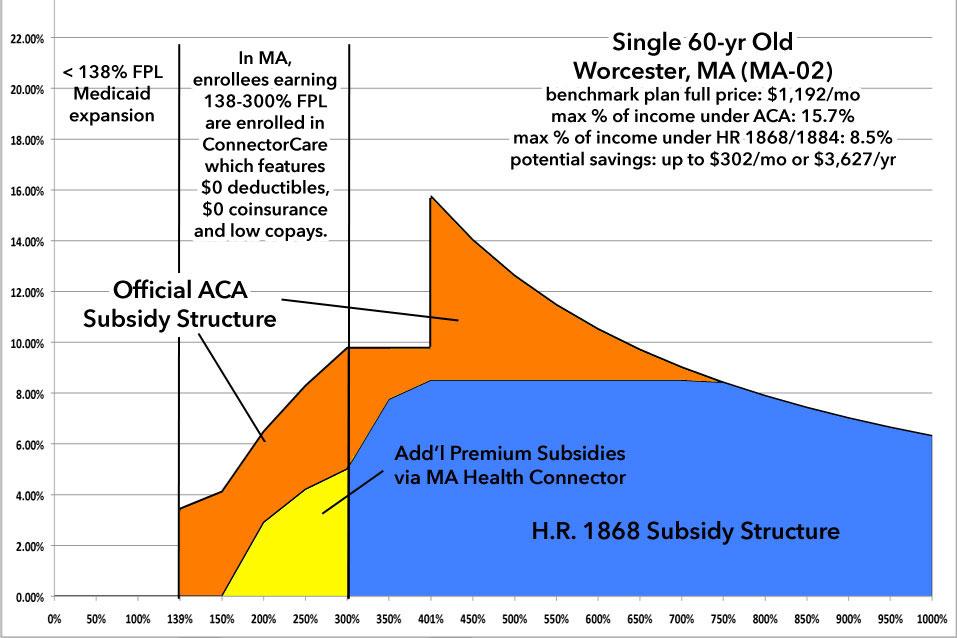 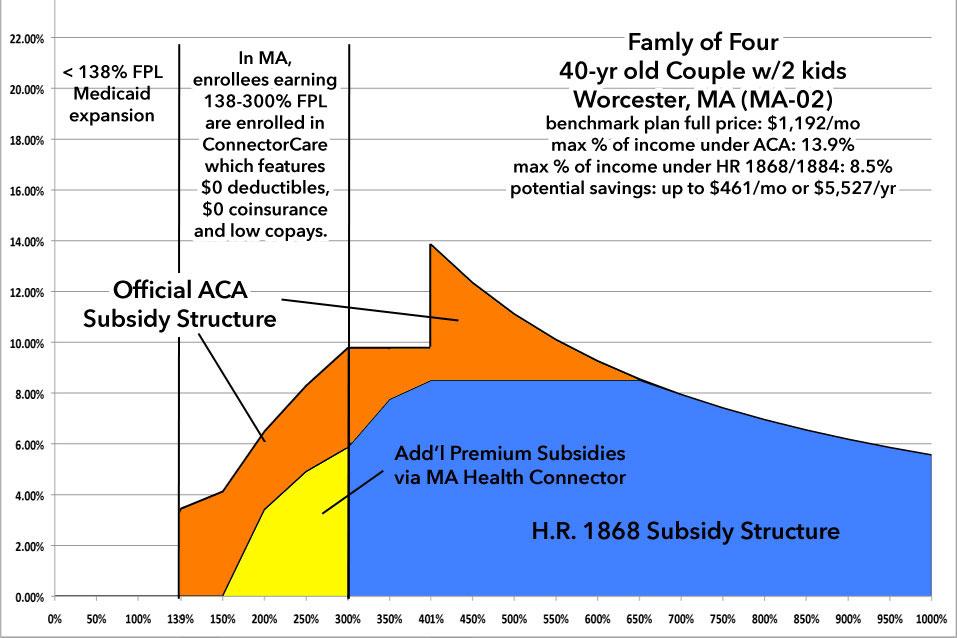 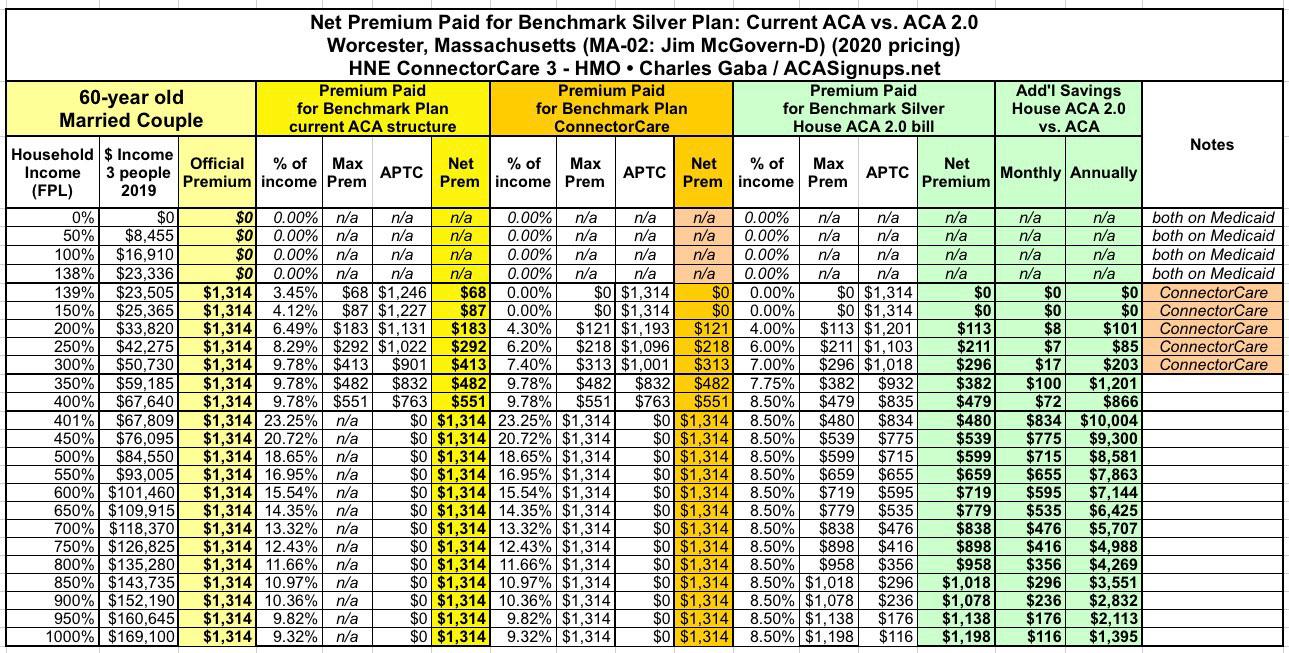 Under the current ACA formula, once this older couple hits around $68,000/year in income, at full price they have to pay as much as 23.3% of their income in premiums. 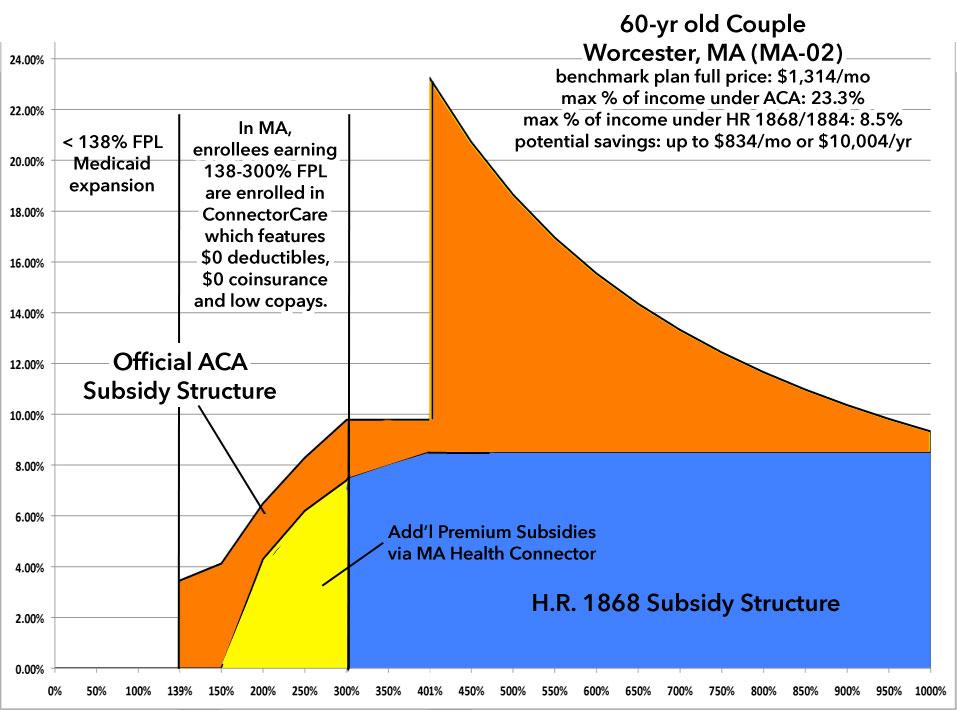