The reinsurance proposal isn't anything unusual or concerning, beyond the normal question of where the state would find their portion of the funding; over a dozen other states have successfully implemented reinsurance programs to varying degrees of success.

The second portion, however, is a completely different story:

Georgia would be the first state to request a broader Section 1332 waiver, which the Trump administration has been encouraging since last fall. The “guardrail” analysis in Georgia’s application relies heavily on Trump-era guidance on Section 1332 waivers. Such a waiver would not have been possible under prior guidance and there are questions about whether the waiver application can be approved under Section 1332’s statutory terms.

If approved, Georgia's individual insurance market would convert into a state-based version of a proposal from Republican Senators Ted Cruz & Mike Lee back in summer 2017 during the "Repeal/Replace" saga known as the Cruz Amendment:

As I explained at the time, this deliberate bifurcation of the healthcare market goes completely against the whole principle of insurance, which is to pool risk. Encouraging healthy people to go towards dirt-cheap junk plans and sick people to go towards fully comprehensive ACA plans would inevitably result in the official pricing of the ACA plans skyrocketing to jaw-dropping heights: 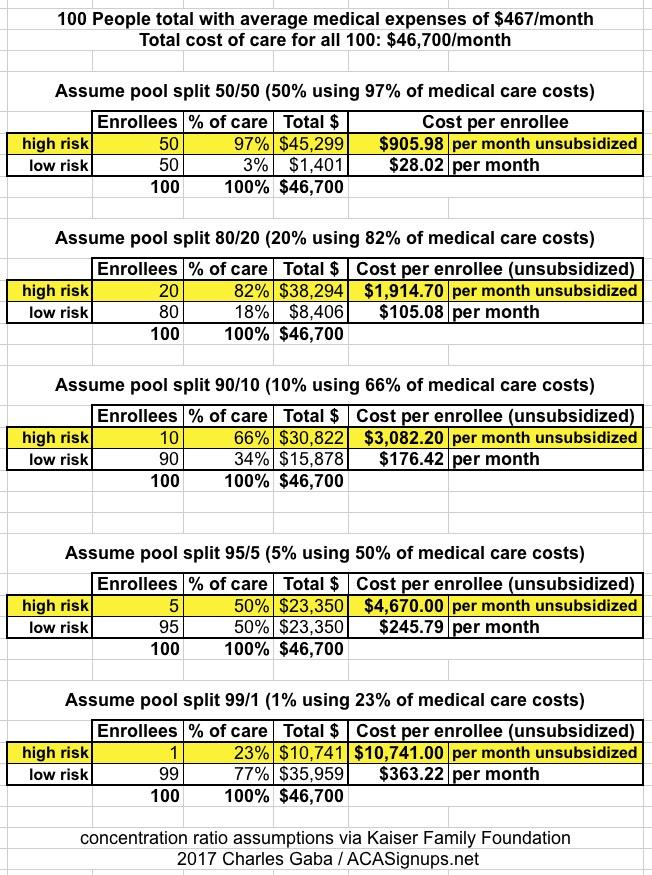 My guess is that you'd end up with something resembling the 2nd to last scenario: Just 5% of Georgia's sickest individual market enrollees would be left in ACA-compliant plans with average premiums running $5,000/month, while the other 95% would be enrolled in junk plans costing less than $300/month.

Of course, with proper financial subsidies for those 5%, that wouldn't be too bad--if 90% of the premiums were subsidized by the government, that would bring the net premiums down to perhaps $400/month or so. This, indeed, would amount to Georgia reverting back to the pre-ACA High Risk Pool (HRP) structure.

The problem with that is the same problem those HRPs had in the first place: The funding levels were, for the most part, a complete joke...and it looks like Georgia's proposed subsidy formula would be as well:

Beginning with plan year 2020, Georgia would maintain a subsidy structure based on incomes from 100 to 400 percent of the federal poverty level (similar to the current federal subsidy structure).

...However, Georgia would cap its contribution towards the Section 1332 waiver on an annual basis. Unlike in the current individual market, this cap could result in waiting lists even for individuals who qualify for subsidies. Georgia notes that subsidies will be granted on a first-come, first-served basis until the state’s funding cap is reached. If there are a larger number of subsidy-eligible residents than expected, those individuals could still enroll in coverage but would be placed on a waiting list for subsidies (meaning they would pay full premiums even though their income would qualify them for subsidies under the ACA).

These, again, are the exact same problems HRPs had before the ACA: Enrollment caps, waiting lists and so forth. It's also a major problem for anyone earning more than 400% FPL who has a pre-existing condition which isn't covered by the non-ACA plans, since they'd have to pay outrageous premiums in order to get an ACA-compliant policy. To be fair, this is already a major problem with the ACA's 400% FPL subsidy cliff...but Georgia's proposal would make this situation much, much worse.

FORTUNATELY, all of this is now moot anyway:

GA 1332 news: Yesterday the state asked the federal gov't to "pause" review. Today CMS declared the problematic parts of the waiver incomplete. Good to see state and feds recognize this waiver is unapprovable. They must reach the same conclusion if it reaches their desk again.

Well, then. Apparently even Georgia realized what a disaster this would have been.

As for the part which was approved, the 1332 Reinsurance proposal, that looks fairly standard...tame, even:

The Reinsurance Program is estimated to lower average premiums by 10.0% statewide for PY 2021, resulting in savings for thousands of Georgians buying in the individual market today and making insurance more affordable for those currently uninsured who are not eligible for subsidies. The actuarial analysis estimates that the Reinsurance Program will increase enrollment in the individual market by 0.4% in PY 2021. The premium reduction will bring the most cost relief to individuals over 400% of the FPL who are not eligible for federal subsidies and therefore pay the full out-of-pocket cost for premiums; the estimated increase in enrollment is expected to be concentrated among residents above 400% of the FPL residing in the highest-cost regions of the State.

The Reinsurance Program will reimburse carriers a percentage of an enrollee’s claims between an attachment point and a cap. In PY 2021, the program is projected to reimburse claims at an average 27% coinsurance rate for claims between the attachment point of $20,000 and an estimated $500,000 cap. The program will reimburse at different percentages based upon a three-tiered geographic structure designed to provide greater premium relief in regions with the highest premiums and encourage more carriers to participate in parts of the State where there is less carrier participation.

What this means in plain English is that the reinsurance program will, on average, cover 27% of the cost of any ACA-compliant market enrollees who rack up medical claims running between $20K - $500K. Most of the other states with reinsurance waivers have a much higher reimbursement level...but they also tend to have a smaller attachment point range, so it probably amounts to around the same effect either way.

Let's say that the price of Bronze, benchmark Silver, and Gold plans for a given enrollee are $300/mo, $600/mo and $700/mo respectively (the Silver plan would have been $500, but the carrier Silver Loaded the CSR costs by bumping it up another $100).

This is the great irony and paradox of the APTC subsidy formula and how it interacts with Silver Loading, which I'll be addressing in more detail in a co-authored post tomorrow.