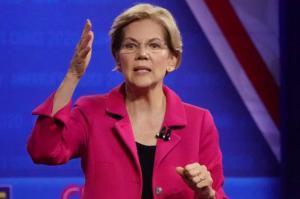 Warren (D-Mass.), who had excited liberals when she initially embraced a Medicare-for-all idea first proposed by rival presidential candidate Sen. Bernie Sanders (I-Vt.), was suggesting a more centrist idea: to delay enactment of the single-payer system and, in the interim, give consumers the choice to opt in. The change might have seemed insignificant to most Americans, but to many in the suburban Washington conference room, Warren’s new stance marked an abrupt retreat, according to several people in attendance.

That moment highlighted the political turbulence that Warren has experienced in recent weeks as she has attempted to extricate herself from a policy dilemma that has blunted her steady rise to the top ranks of the Democratic nominating contest.

...“It would have been better to do it earlier,” [Barney] Frank said of her shift, adding that he had privately told her that backing the Sanders plan was “a terrible mistake.”

Recent polling suggests Warren has sustained political damage from her health-care policy. After climbing to the top of the field by focusing on a message of overhauling Washington and Wall Street, Warren plateaued as her campaign became consumed with health care.

Now, she is falling.

Here, again, is Eliabeth Warren's full 5-minute response to the issue of achieving universal healthcare coverage from back in March 2019:

Here's a partial transcript; the full version is availble here:

...and here's her response three months later at the first Democratic candidate debate in late June:

Q: Senator Warren, you signed on to Bernie Sanders’ Medicare-for-all plan. It would put essentially everybody on Medicare and then eliminate private plans that offer similar coverage. Is that the plan or path that you would pursue as president?

Over the course of the summer, I, like many others, noticed the seeming 180-degree change in tone...and I waited for her to reverse herself again. And waited. And waited. And finally, last month, she rolled out her "transition plan" to achieving "pure" Medicare for All...and it sounds an awful lot like what I've been arguing for years now:

Of course, in Warren's case, she's proposing that the first bill kind of cram ACA 2.0, a Public Option and "Medicare for America" into a blender, while the second bill she's proposing would be Bernie's "pure" M4All bill (except with only a one-year transition supposedly being needed instead of four years, since much of the heavy lifting would supposedly have already been done by that point thanks to the first bill).

In my case, I'm proposing making the first bill only include the ACA 2.0 upgrade and hopefully a robust public option, while the second bill would be "Medicare for America". Still, the basic principle is the same.

In any event, my takeaway from the Washington Post piece is pretty much the same thing I've been saying since June: She should've stuck with her March response instead of chasing after Bernie's base too hard. She and Bernie may be competing for the same demographic, but she was never going to peel away his die-hard supporters, who never trusted her to be a "true believer" in his and only his M4All bill...while many other Dems appear to not trust that she won't try to push through a healthcare bill which is still simply too much for the country to swallow in one sitting.

Instead, she seems to have lost some level of support in both camps. This is similar to what happened to Kamala Harris a few months earlier when she tried "splitting the baby" with her own "Medicare for All" plan, also after months of chasing after Bernie's base on the issue. One difference is that Warren's "brand" was already "muscling in" on Bernie's territory (from the Bernie base POV, anyway) on other issues as well, while Harris was already seen as "less progressive" (again: from the Bernie base POV) to begin with. In both cases, however, they're now trying to appeal to both the "M4All purists" and the "ACA 2.0 w/ a Public Option" wings while seemingly failing to appeal to either.

The stupid part about all of this is that, and I'll say this one more time, whatever Big Healthcare Bill theoretically passes a Dem-controlled House, a Dem-controlled Senate and being singed by a Democratic President between 2021 - 2024 is most likely going to end up being a robust ACA 2.0 upgrade at best regardless of who that "Dem President" ends up being anyway, which makes a lot of this jockeying for position rather pointless.