UPDATE 8/27/19: I've made some more modifications to the table, including removing Jay Inslee entirely (he dropped out) and switching the order so that the less dramatic bills are on the left and the more dramatic bills are on the right. I've also broken out both Joe Biden and Kamala Harris' bills into their own columns instead of lumping them in with kind-of/sort-of similar ones.

Finally, I've marked the official "preferred" plans (as stated by the candidates themselves), as of this writing, in blue where it's known. For instance, Elizabeth Warren may be the lead sponsor of ACA2.0/CHIPA, but she's officially pushing Bernie Sanders' "pure" Medicare for All bill as of right now.

UPDATE 10/17/19: Nothing's really changed, but I've cleaned up the table below further yet, including adding my preferred "2-stage" path forward.

With all the fuss & bother being made over whether Democratic Presidential candidates support or don't support eliminating private insurance in favor of a universal, fully-mandatory "Medicare for All" single-payer healthcare system (especially after the first official debates over the past couple of days), I decided to attempt to put together a comprehensive table listing which healthcare expansion/overhaul bills each of the candidates actually support or oppose.

This may sound like a simple question: Senators Booker, Gillibrand, Harris, Sanders (obviously) and Warren are all cosponsors of Bernie Sanders' "Medicare for All" bill, S.1129, while Representatives Gabbard, Ryand and Swalwell have cosponsored the House version (H.R.1384). Pretty cut 'n dry, right?

Well, it's more complicated than that. Most of the Senators (and some of the House members) running have actually cosponsored other significant healthcare expansion bills as well as "pure" Medicare for All...and many have made public statements indicating that they'd likely also be open to some of the other bills on the table (or some variant thereof).

In addition, half of the 20+ candidates aren't in a position to officially "cosponsor" any federal healthcare bill because they're either not currently an elected official (Biden, Bullock, Castro, Delaney, Hickenlooper, O'Rourke & Yang) or they're a Governor or Mayor (Pete Buttigieg, Bill de Blasio, Jay Inslee). Note that I'm ignoring Mike Gravel, Wayne Messam, Joe Sestak and Marianne Williamson altogether; if you have a problem with that...well, get over it.

In the table below, I've done my best to clarify which candidates either officially support, officially oppose or are open to supporting the eight different heatlhcare expansion/improvement bills currently on the table (that is, bills which have been formally introduced in either the U.S. House, the U.S. Senate or both). Keep in mind that there could be other bills introduced over the next couple of years as well, although they would likely be some variant of one or more of the ones already available.

I've included the seven actual bills outlined by Sarah Kliff and Dylan Scott in their excellent Vox explainer. They technically analyzed nine plans, but two of them are the House & Senate versions of Medicare for All, while one of them isn't an actual bill yet (the Urban Institute's "Healty America" proposal). I'm also including one more column: The "ACA 2.0" suite of upgrades which I've written extensively about, parts of which have actually already passed the House (there's a similar version in the Senate which hasn't gone anywhere yet).

I've broken out the eight bills into three main categories:

Improvements to the existing system:

*(the official titles of each are way too clunky)

Besides the official Congress.gov cosponsor record, I mostly used this recent survey by the NY Times of 19 of the candidates, along with various other comments or responses several candidates have given over the past few months.

It's important to note that Sen. Sanders cosponsored the 2017 version of Sen. Schatz's "State Public Option Act" as well as the 2018 version of Sen. Warren's ACA 2.0 Act (CHIPA)...before stripping his name as a cosponsor of each for the 2019-2020 legislative session and then trashing the House version of ACA 2.0 as being unacceptable even as a short-term solution. Make of that what you will.

My point is that all of the bills listed below are good, and they'd all represent a significant improvement to existing law. 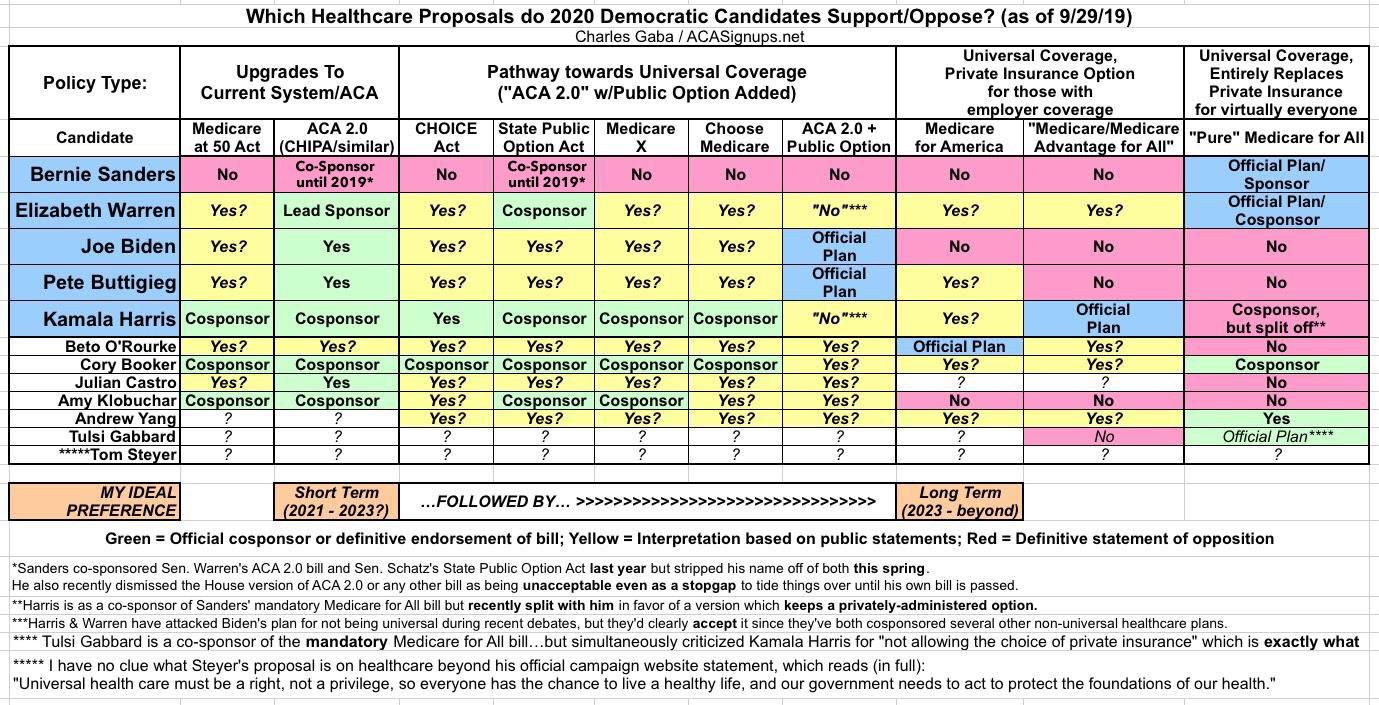